BLOG
HOME  >  Browse  >  Rare Books  >  Landmark Books  >  The Great West Illustrated in a series of photographic views across the continent, taken along the line of the Union Pacific Railroad, west from Omaha, Nebraska 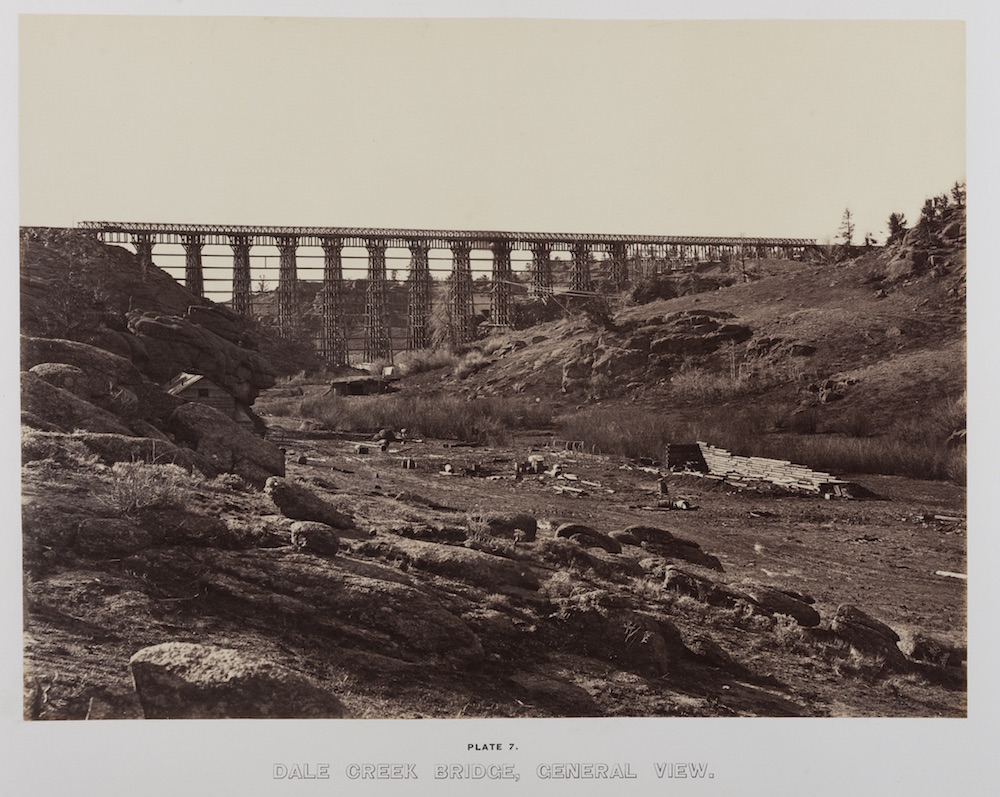 The Great West - a landmark of American photography

RUSSELL, ANDREW J. The Great West Illustrated in a series of photographic views across the continent, taken along the line of the Union Pacific Railroad, west from Omaha, Nebraska

Oblong folio. Original half morocco signed by Kettner. Minor touchups to binding, some soiling, a few stains. Title, preface leaf, 3 leaves of contents and 1 leaf half-title. 50 albumen photographs (91⁄2 x 12 in. and smaller), mounted, each with printed caption and plate number on mount. Plate 9 with original retouching in the print, minor surface wear and foxing. Occasional variability to the images, but in general these are high-quality examples of Russell’s famous views. An excellent copy.

First edition. One of the monuments of American photography, and Russell’s masterpiece, The Great West documents the construction of the Union Pacific Railroad and the land through which it ran. The 50 splendid large format albumen photographs depict scenes along the railroad, which ran from Omaha, through Wyoming and Utah, and ended in Sacramento. The photographs, organized geographically from east to west, depict canyons, mountains, rock formations, cuts along the railroad, rivers, towns, locomotives, trains, and bridges, as well as several group portraits.

In his preface, Russell states that he was “fully convinced that the most comprehensive manner in which a positive and substantial knowledge could be offered on a subject which heretofore has given data only vague and insignificant, was in presenting to the public a series of photographic views across the continent.” The photographs were made and published in an effort to promote both westward expansion and the building of the railroad. With this volume Russell shows the inextricable links between photography, the westward progress of American civilization, and engineering technology.

“Much as photographs by the Hubble Space Telescope fascinate us today, Russell’s images of the extraordinary achievement of spanning the West by rail captured the interest and imagination of citizens across the country” (Beinecke Library).

During the Civil War, Russell served as photographer for the United States Military Railroad. When the war ended, he became fascinated with the great national project of building a transcontinental railroad, which was to the 1860s what the moon landing was to the 1960s. The railroad was inaugurated when Lincoln signed the Pacific Railroad Act in 1862. The Union Pacific built the railroad west from Omaha, while the Central Pacific built east from San Francisco. The two were joined on May 10, 1869.

The Union Pacific engaged Russell to document its portion of the line, which traversed a vast and often unexplored expanse of America. In one of the first great efforts to document a largely unphotographed section of the American West, Russell made three photographic expeditions along the line, one in 1868 and two in 1869. The resulting classic series of views is one of the great achievements of 19th-century American photography.

RARE. Few copies survive intact, and most have already been placed in major institutional collections.