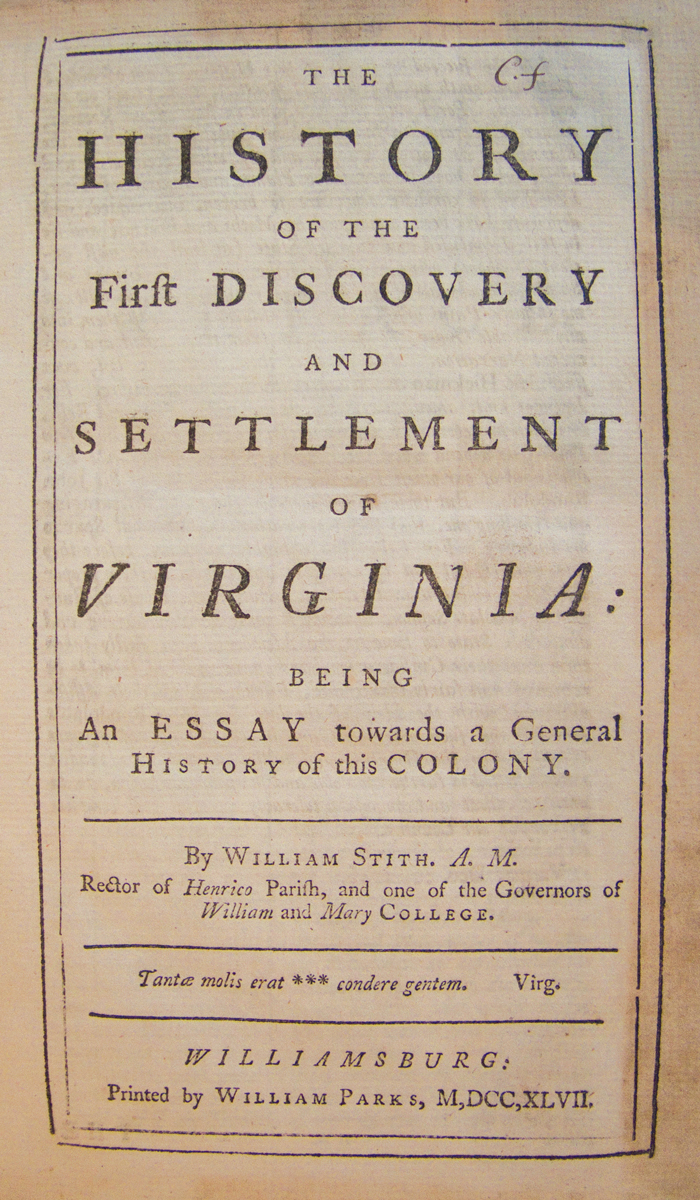 a classic colonial history, printed in America, with a colonial planter provenance

STITH, WILLIAM. The History of the First Discovery and Settlement of Virginia

First edition, first issue. The later issues may have been printed as late as 1753. This is a lovely copy of Stith’s classic history of Virginia from its establishment in 1607 through the dissolution of the Virginia Company of London in 1624, written by the third president of the College of William & Mary.

Stith’s History of Virginia was one of the first histories of America to be written and published in the British colonies and the first to be printed in Virginia. Stith was well-connected and had access to major colonial libraries such as that of William Byrd as well as to figures who participated in the events he described. William Parks, who established his press in Williamsburg in 1730, was the second printer in Virginia. Parks was “the most important colonial printer after Benjamin Franklin”(ANB).

“Stith’s History covered the period up to 1624. According to the preface, he intended to carry it further, but no more was published. Its value is based chiefly on the manuscript sources at his command. He says that these included copies of documents collected by his uncle, Sir John Randolph, in preparation for writing an historical ‘Preface’ to the Laws of Virginia, and a transcript of the records of the Virginia Company lent by Colonel William Byrd, also copies of records of the Virginia courts. His printed sources were mainly the writings of Captain John Smith, Hariot, and Purchas” (Sabin). “The early charters contained in the Appendix give this work its chief value at the present day … this book has become a high authority to later writers” (Church).

Thomas Jefferson owned a copy of this edition and recommended it as a requirement for a Virginia gentleman’s library in his famous letter to Robert Skipwith. One of the very few books recommended by Jefferson to have been printed in America before the Revolution, this is one of the earliest obtainable books printed in Williamsburg.

The first issue is very scarce. Jefferson recommended the book as essential for a Virginia gentleman’s library, but there is no copy at the Thomas Jefferson Foundation (Monticello).

An excellent colonial Virginia provenance: Alexander Speirs of Elderslie (1714-1782), with his bookplate. Son of an Edinburgh merchant, Speirs went with his brother and sister to Virginia in 1741 to seek his fortune. There he established a plantation and married before returning to Glasgow, leaving the plantation under the supervision of his brother. Over the coming decades Speirs became one of the great tobacco lords and amassed a huge fortune.