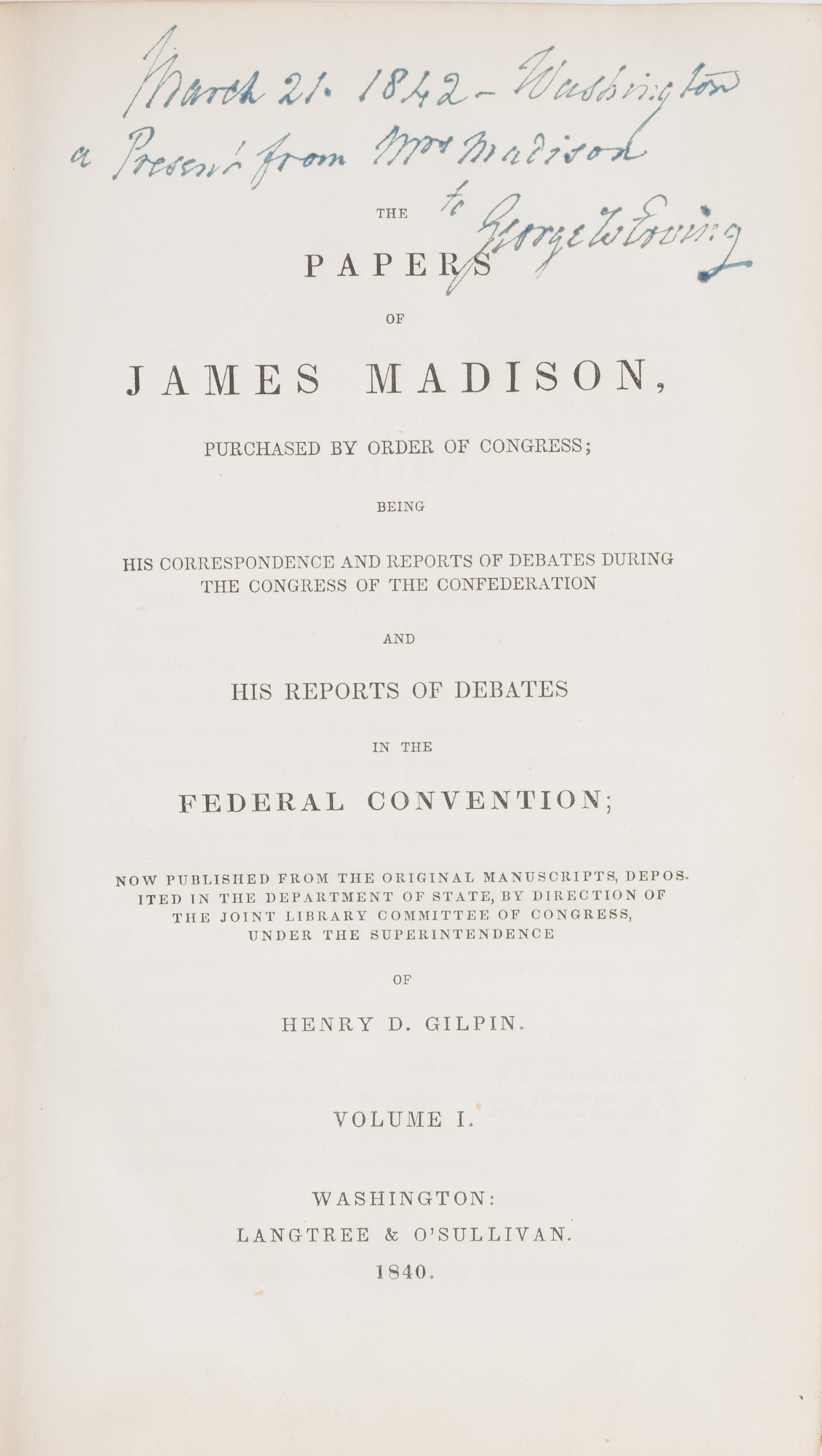 MADISON, JAMES. The Papers of James Madison purchased by order of Congress; being his correspondence and reports of debates during the congress of the confederation and his reports of debates in the federal convention . . . [edited by Henry Gilpin]

An outstanding and rare presentation copy from Dolley Madison, with a splendid autograph letter signed to the diplomat George W. Erving stating,

“May I ask you my valued friend to accept from me the accompanying volumes as a memento of one [James Madison] you regarded whose attachment for you lasted with his life? In the same sentiments and good wishes for your happiness, wherever you go, I would express my regret at not seeing you again. Truly, D. P. Madison.”

This set is inscribed by the recipient on each title page: “Washington March 21, 1842 a Present from Mrs. Madison to George W. Erving.” Erving visited the Madisons at Montpelier as early as 1800. He had a long and prominent diplomatic career including Minister to Copenhagen and Minister to Spain during the Madison presidency.

Dolley Madison, who married James Madison in 1794, helped to define the role of the president’s spouse. Working with architect Benjamin Latrobe, she transformed the White House into an important public space in keeping with American values, satisfying Republicans and Federalists alike. She became one of the heroes of the War of 1812 by saving the portrait of George Washington when the British burned the White House in 1814. “For half a century she was the most important woman in the social circles of America” (White House Historical Association).

“Dolley Madison transformed the role of the first lady. She could not copy the Federalist forms of Martha Washington and Abigail Adams, nor take up the bachelor style of Thomas Jefferson. She found that she needed to create new ceremonial models and a new public setting for the republic. She did so with modesty, flair, charm, and skill. She was not an appendage to her powerful husband; she constructed, instead, a kind of third world between public and private. The drawing rooms of the White House were hers, and she presided over her world as no first lady had done before. In doing so she created a precedent that her successors would follow” (ANB).

James Madison’s papers form our most important record of the Constitutional Convention of 1787. “Although not the official secretary of the body, he had resolved to make the most complete notes of its deliberations that time permitted, and he carried out his purpose with an industry that, as he said, almost killed him. The result, his Journal of the Federal Convention, first published in 1840, is by far the most comprehensive record of the proceedings” (DAB). The third volume includes a facsimile of Jefferson’s handwritten Declaration of Independence, facsimiles from Madison’s notes of the debates, and facsimiles of the signatures to the Constitution.

He wrote, “In pursuance of the task I had assumed, I chose a seat in front. . . . In this favorable position for hearing all that passed, I noted in terms legible & in abbreviations & marks intelligible to me what was read from the Chair or spoken by members; and losing not a moment between the adjournment & reassembling of the Convention I was enabled to write out my daily notes. . . . I was not absent a single day, nor more than a fraction of an hour, so that I could not have lost a single speech, unless a very short one.” When asked to publish his notes, Madison replied that “it might be best to let the work be a posthumous one or at least that its publication be delayed till the Constitution be well settled by practice.”

The last survivor of the Convention, Madison died in 1836. His journal, published for the first time as The Papers of James Madison in three volumes in 1840, remains the principal source for most of what we know about the momentous events he describes. Madison directed in his will: “Considering the peculiarity and magnitude of the occasion which produced the Convention at Philadelphia in 1787, the Characters who composed it, the Constitution which resulted from their deliberations, its effects during a trial of so many years on the prosperity of the people living under it, and the interest it has inspired among the friends of free Government, it is not an unreasonable inference that a careful and extended report of the proceedings and discussions of that body, which were with closed doors, by a member who was constant in his attendance, will be particularly gratifying to the people of the United States, and to all who take an interest in the progress of political science and the cause of true liberty, It is my desire that the Report as made by me should be published under her [Dolley’s] authority and direction.”

This is a tremendous presentation copy of the James Madison papers.