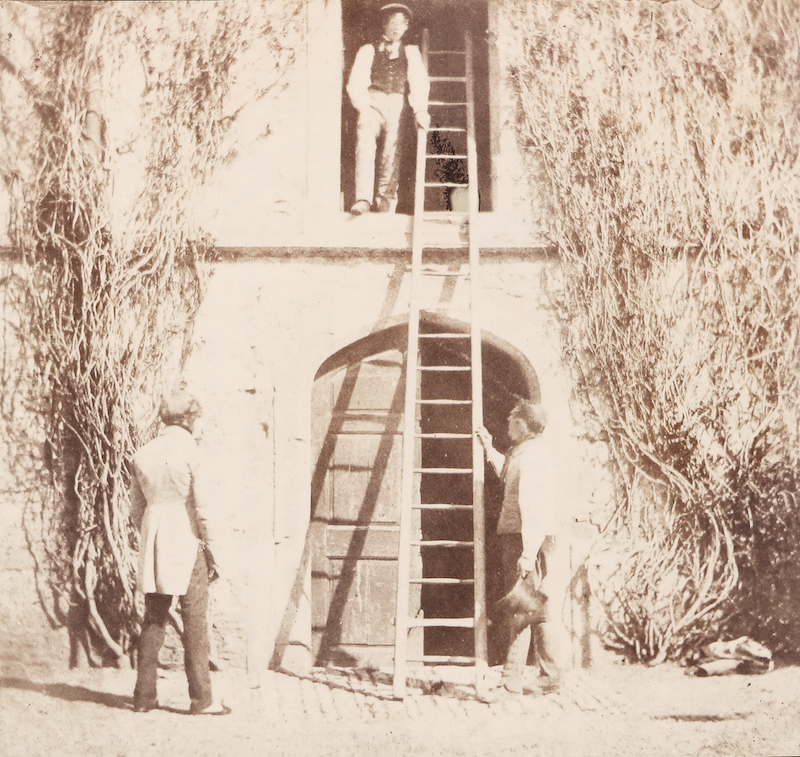 “Talbot’s Pencil of Nature, the first commercially published book illustrated with photographs–a milestone in the art of the book greater than any since Gutenberg’s invention of moveable type” – Metropolitan Museum of Art

A complete set of six fascicles illustrated with 24 salt prints (various sizes up to 6 ¼ x 8 ½ in.), 21 prints on mounts with hand-ruled borders, 20 numbered in an unidentified hand in pencil or ink on the mount, 3 loose; plate 1 a variant, circa 1846, and plate 2 a substitute. Gray linen-backed boards (frayed), manuscript title on spine, bound without printed wrappers. Five-line “Notice to the Reader” inserted. A modern print of Window at Lacock Abbey tipped to the front free end paper. Some fading, occasional stains and offsetting, some pencil notations. Very good condition overall.

The Pencil of Nature is a landmark in the history of photography, “an epoch-making publication, both technically and aesthetically” (Brunet). The work is “the first commercially published book illustrated with photographs–a milestone in the art of the book greater than any since Gutenberg’s invention of moveable type” (Metropolitan Museum of Art).

William Henry Fox Talbot is one of the two founders of photography, and this work dates to those earliest days of the art. Talbot began his photographic experiments in 1834 when he exposed sensitized paper to light, creating a negative image on paper. The next year he used that negative to create a positive image, laying he groundwork for the revolution he helped bring about. In January 1839, after a three-year hiatus from photography, Talbot learned that Louis Daguerre, with Nicéphore Niépce, had developed a photographic process in Paris. Talbot rushed to assemble the work he had already created and to formalize this findings. On January 31, 1839 he read a paper on his “photogenic drawing” to the Royal Society in London. When Daguerre’s process was revealed in August, it became clear that the men used utterly different techniques.

In 1840 “Talbot discovered that an exposure of mere seconds, leaving no visible trace on the chemically treated paper, nonetheless left a latent image that could be brought out with the application of an “exciting liquid” (essentially a solution of gallic acid). This discovery, which Talbot patented in February 1841 as the “calotype” process (from the Greek kalos, meaning beautiful), opened up a whole new world of possible subjects for photography” (Malcolm Daniel, “William Henry Fox Talbot (1800–1877) and the Invention of Photography”). The process produced a negative from which multiple prints could be made, unlike the one-off daguerreotype.

Talbot’s The Pencil of Nature would demonstrate the revolution in art and publishing brought about by his invention. “Issued in fascicles [individual parts] from June 1844 through April 1846, The Pencil of Nature contained twenty-four plates, a brief text for each, and an introduction that described the history and chemical principles of Talbot’s invention. The photographs and texts proposed, with extraordinary prescience, a wide array of applications for the medium that included reproducing rare prints and manuscripts, recording portraits, inventorying possessions, representing architecture, tracing the form of botanical specimens, and making art” (Metropolitan Museum of Art).

Very rare in the market. No other complete example has appeared for public sale in decades, and even single examples of the fascicles are rare, with just a handful appearing at auction since 1970. A fragmentary copy containing 17 salt prints was offered as part of a family collection of Talbot salt prints at Sotheby’s in 2021. The collection was sold for just under $2,000,000.

With all but a handful of surviving copies of The Pencil of Nature now in the great institutional collections, this is one of the last opportunities ever to acquire this landmark in the history of photography. This is one of only four privately-held sets with all 24 photographs.