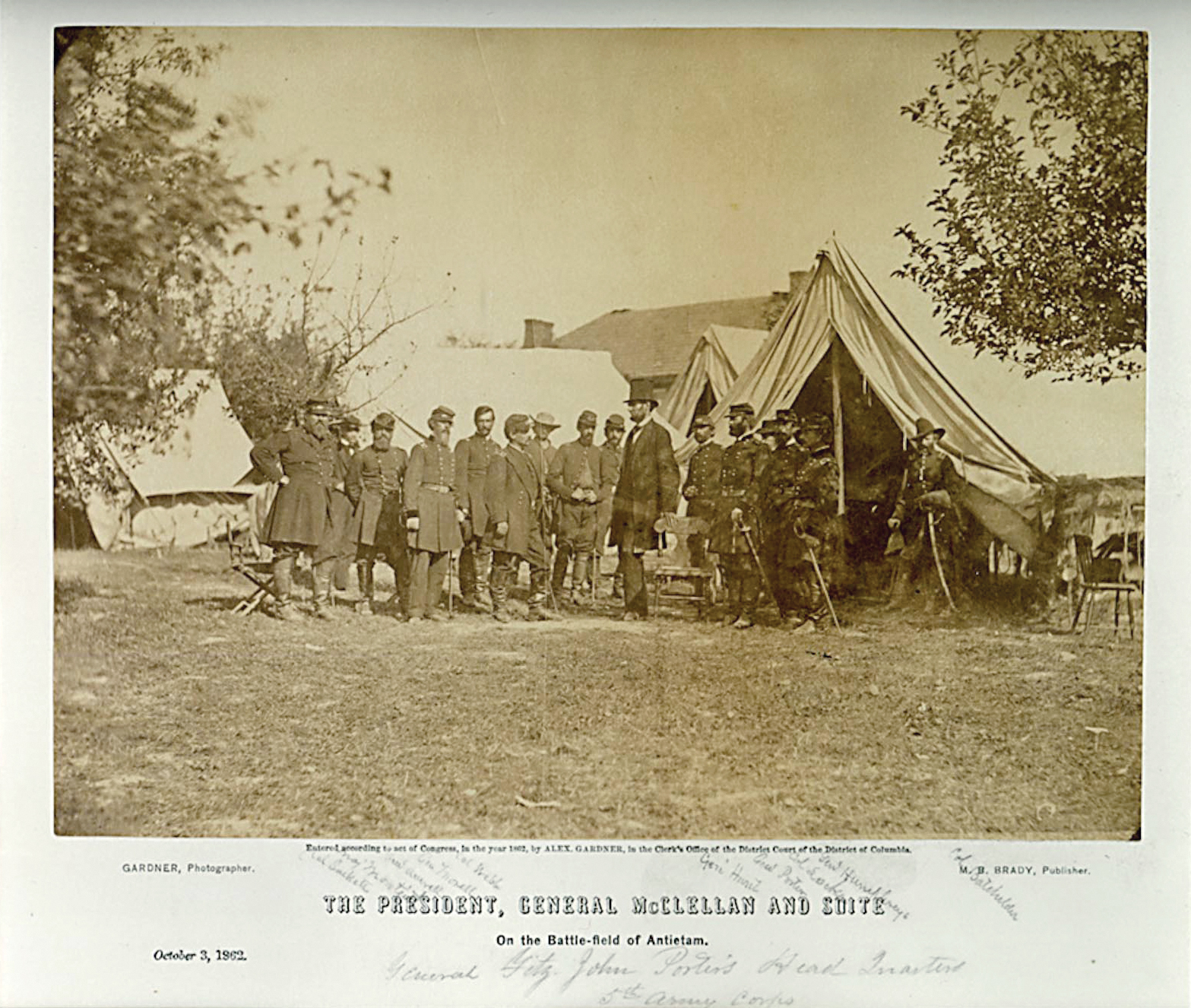 Lincoln at Antietam, with the Mathew Brady mount

(LINCOLN, ABRAHAM.) Gardner, Alexander. The President, General McClellan and Suite on the Battle-Field of Antietam

This photograph of Lincoln at Antietam is one of the best-known images of the Civil War. The Battle of Antietam, fought on September 17, 1862, was the bloodiest single-day battle in American history. The Confederate withdrawal was sufficiently heartening for Lincoln to announce his Emancipation Proclamation, which had been withheld awaiting a victory. Two weeks later Lincoln came to survey the Maryland battlefield, to see the troops, and to confront George McClellan, commander of the Army of the Potomac, who had failed to pursue Lee’s army. Soon after the engagement, Alexander Gardner and other photographers working for Mathew Brady came to the battlefield, capturing the carnage in dozens of photographs and then documenting Abraham Lincoln’s tour of the battlefield on October 3. In an unprecedented exhibition, Mathew Brady displayed Gardner’s Antietam photographs in New York. “Mr. Brady has done something to bring home to us the terrible reality and earnestness of war. If he has not brought bodies and laid them in our dooryards and along the streets, he has done something very like it. At the door of his gallery hangs a little placard, ‘The Dead of Antietam …’” (New York Times, October 20, 1862). Not long after Brady’s Antietam exhibition, Gardner struck out on his own, establishing his own gallery in Washington. Lincoln would sit for him more than any other photographer. The photograph shows, from left to right: Colonel Delos B. Sacket, Captain George Monteith, Lieutenant Colonel Nelson B. Sweitzer, General George W. Morell, Colonel Alexander S. Webb (Chief of Staff, 5th Corps), General George B. McClellan, Scout Adams, Dr. Jonathan Letterman (Army Medical Director), unidentified soldier, President Abraham Lincoln, Colonel Henry J. Hunt, General Fitz-John Porter, Joseph C. G. Kennedy, Colonel Frederick T. Locke, General Andrew A. Humphreys, and Captain George Armstrong Custer (Ostendorf p. 107). This is a classic photograph of Abraham Lincoln with the troops in the field, bearing the imprints of Mathew Brady and Alexander Gardner, the two most important figures in Civil War photography. Ostendorf, Lincoln’s Photographs: A Complete Album O-62.