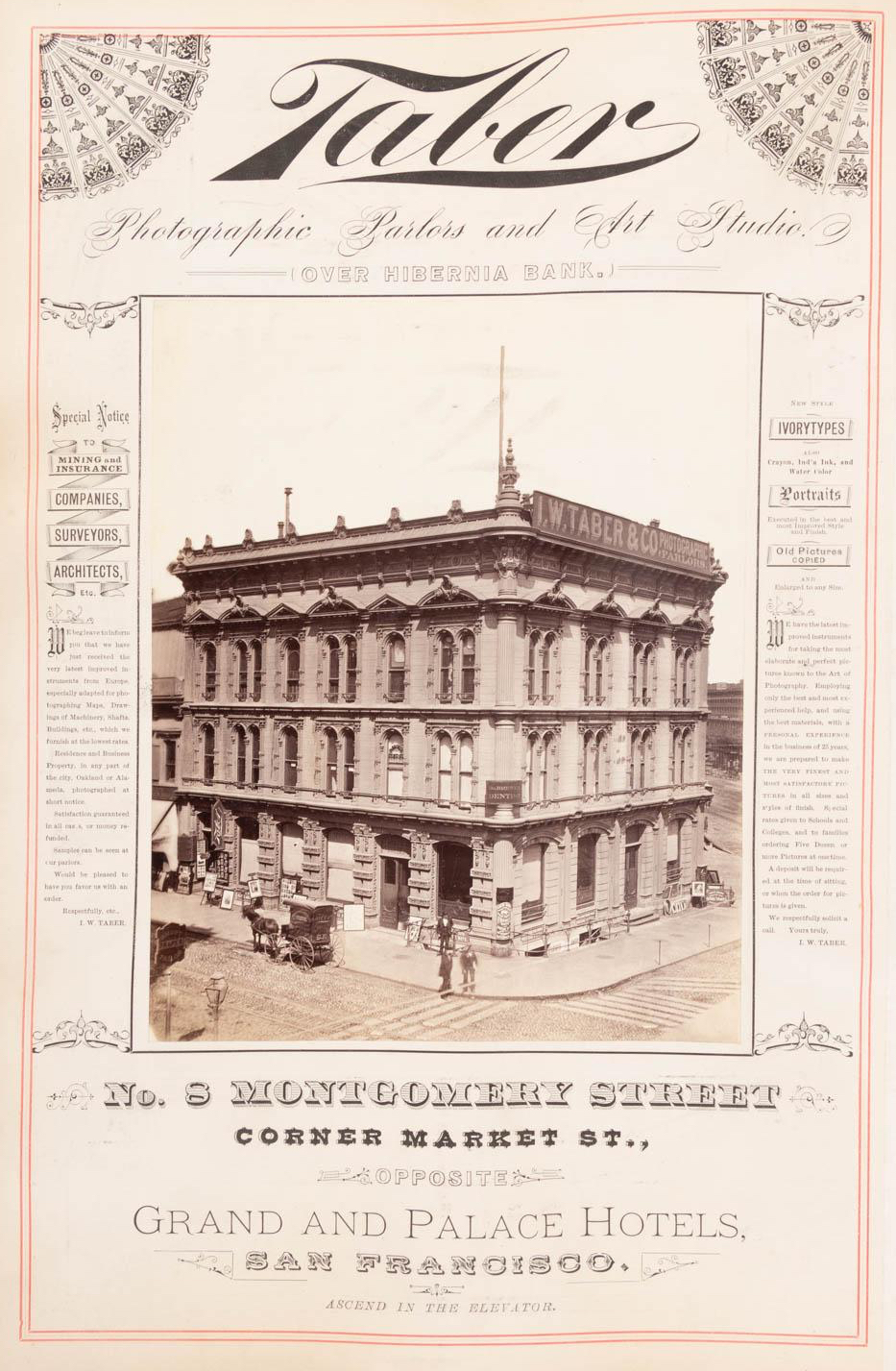 The Taber Photographic Album is the most important photographically illustrated book of 19th-century American business and commerce. This remarkable volume presents a dazzling overview of the businesses, trade, and commercial culture of San Francisco in 1880. Taber was the most successful photographer of 19th-century California, and this work demonstrates his genius for creating compelling images and his shrewd marketing.

“In 1880 Taber issued The Taber Photographic Album of Principal Business Houses, Residences and Persons, a promotional folio containing between 98 and 103 [ours has 108] original albumen prints on stiff boards. Copies of the book, which varied in the number of pages and contents, were placed in the best east and west coast hotels and steamships, and they had the desired effect of publicizing both Taber’s gallery and the commerce of San Francisco” (Palmquist, Pioneer Photographers of the Far West).

There are a number of wonderful interiors including Taber’s photography gallery, a Chicago, Burlington, and Quincy Railroad dining car, the Japanese Art Repository, Bunker’s pork packing counter, Louis Dampf & Co.’s frame shop, the Palace Hotel decorated for the 1880 visit of President Rutherford B. Hayes, and countless others.

Portraits include Taber himself, at the beginning of the album, U.S. Grant, R.B. Hayes, W.T. Sherman, California Governor George C. Perkins, California Senator A.A. Sargent, D. W. Hitchcock,  John P. Jackson (President of the Post Publishing Company), A. Andrews (jeweller), and Emelie Melville (actress). Some proprietors proudly pose with their products or coworkers. Mrs. W.P. Rutherford and a female colleague show her custom made corsets, while Robert F. Bunker stands with his butchers. Many of the photographs show people standing in front of the buildings or storefront, sometimes wearing the attire associated with their profession or trade.

Other images include a view of the bridge over Russian River at Healdsburg constructed by the San Francisco and North Pacific Railroad, photographs of illustrated lithographed trade cards, and views from industrial fair exhibitions, such as a display of the blades of the Pacific Saw Manufacturing Co. at the Fourteenth Industrial Exhibition.

Isaiah Taber was a dominant figure in Western photography after the Civil War. He came to San Francisco in 1864 and founded a gallery in 1871. In the winter of 1875-76, Carleton Watkins went bankrupt, and Taber acquired his gallery and his enormous collection of negatives. “Once he had acquired Watkins’s gallery and negatives, Taber began his bid for the exalted position of premier photographer of the west coast” (Palmquist). In 1906 the San Francisco earthquake ended Taber’s career, destroying his premises and an estimated twenty tons of view negatives and eighty tons of portrait negatives. This album, issued in 1880, shows Taber at the height of his ambition and fame.

Taber’s album was printed in very limited numbers, and only a handful survives. Examples vary in the numbers and subjects of photographs. This volume contains more photographs than any other extant example. The known copies are:

The Taber Photographic Album transports the viewer to the streets of 1880s San Francisco, the greatest American metropolis west of the Mississippi. This enormous photographic rarity presents endless opportunities for research, publication, and exhibition.

A detailed inventory of the photographs is available on request.