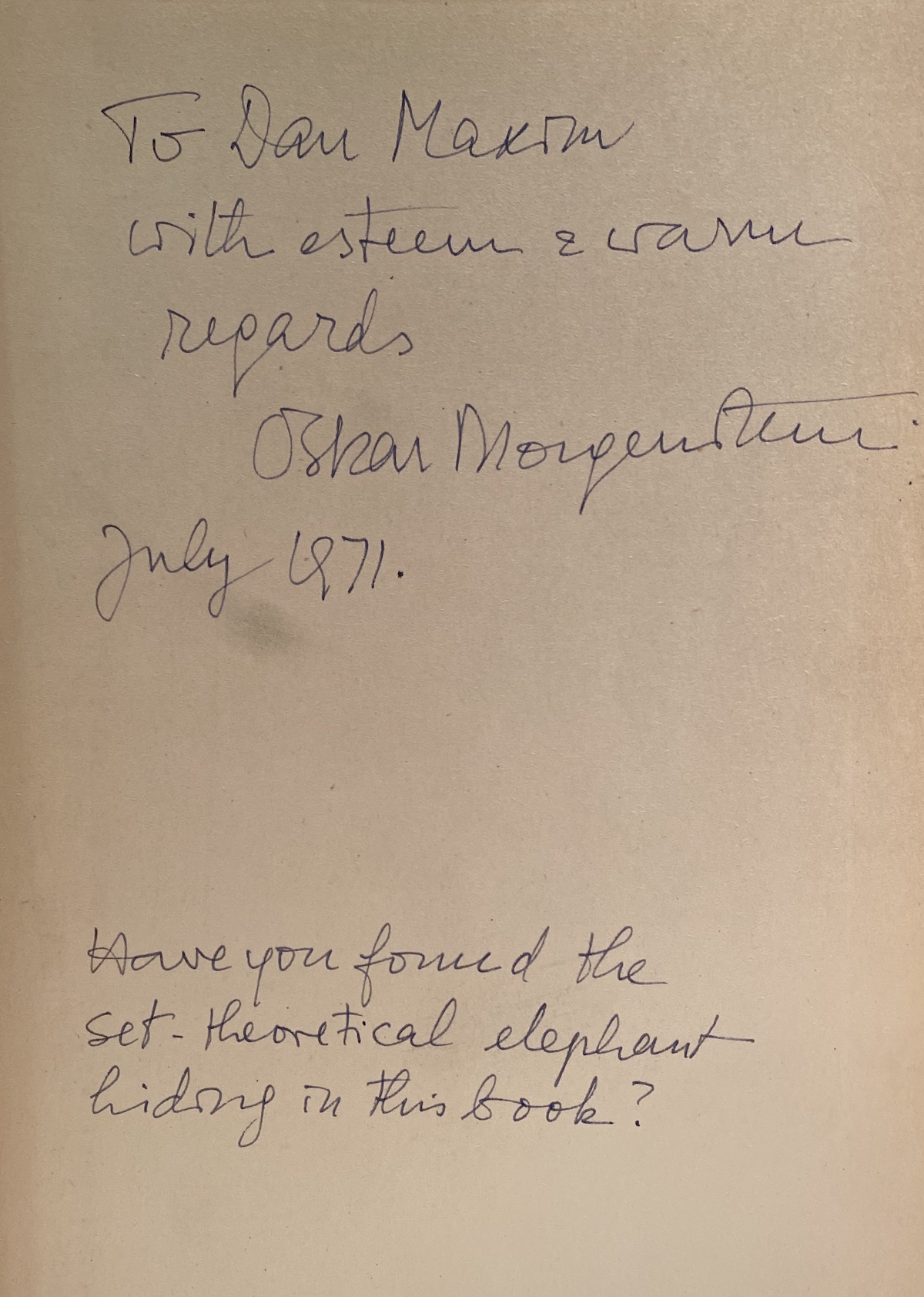 xviii, 625 pp. Original cloth, without dust jacket. Light wear. Very good. The often-lacking Corrigenda slip is tipped in at the end of the table of contents.

FIRST EDITION of the founding book of game theory. Inscribed by Oskar Morgenstern: “To Dan Maxim, with esteem and warm regards Oskar Morgenstern July 1971 Have you found the set-theoretical hiding in this book?”

At Princeton in the 1930s, John von Neumann, who had first explored competitive games in a 1928 paper, met Oskar Morgenstern, the first economist to recognize that economic agents must take the interactive nature of economics into account when making their decisions. Their collaboration culminated in Theory of Games and Economic Behavior, which founded of the discipline of game theory and revolutionized mathematical economics. In addition to presenting the strictly competitive theory that von Neumann had analyzed with his minimax theorem, this work introduces the notion of the cooperative game and presents the first extensive applications of game theory.

“Had it merely called to our attention the existence and exact nature of certain fundamental gaps in economic theory, the Theory of Games and Economic Behavior … would have been a book of outstanding importance. But it does more than that. It is essentially constructive: where existing theory is considered to be inadequate, the authors put in its place a highly novel analytical apparatus designed to cope with the problem. It would be doing the authors an injustice to say that theirs is a contribution to economics only. The scope of the book is much broader. The techniques applied by the authors in tackling economic problems are of sufficient generality to be valid in political science, sociology, or even military strategy. The applicability to games proper (chess and poker) is obvious from the title. Moreover, the book is of considerable interest from a purely mathematical point of view… The appearance of a book of the caliber of the Theory of Games is indeed a rare event” (World of Mathematics).

Theory of Games and Economic Behavior touched off a firestorm of activity that continues to this day. The theory of games has become central to economics and has made key contributions to finance, economics, political science, business, computer science, biology, and nuclear strategy. Mathematician A. H. Copeland wrote,  “Posterity may regard it one of the major scientific achievements of the first half of the twentieth century.”

“The method of von Neumann and Morgenstern has become the archetype of later applications of game theory. One takes an economic problem, formulates it as a game, finds the game-theoretic solution, then translates the solution back into economic terms. This is to be distinguished from the more usual methodology of economics and other social sciences, where the building of a formal model and a solution concept, and the application of the solution, concept to the model, are all rolled into one” (New Palgrave).

Inscribed copies of this landmark first edition are rare. This is the first example we have ever seen for sale.