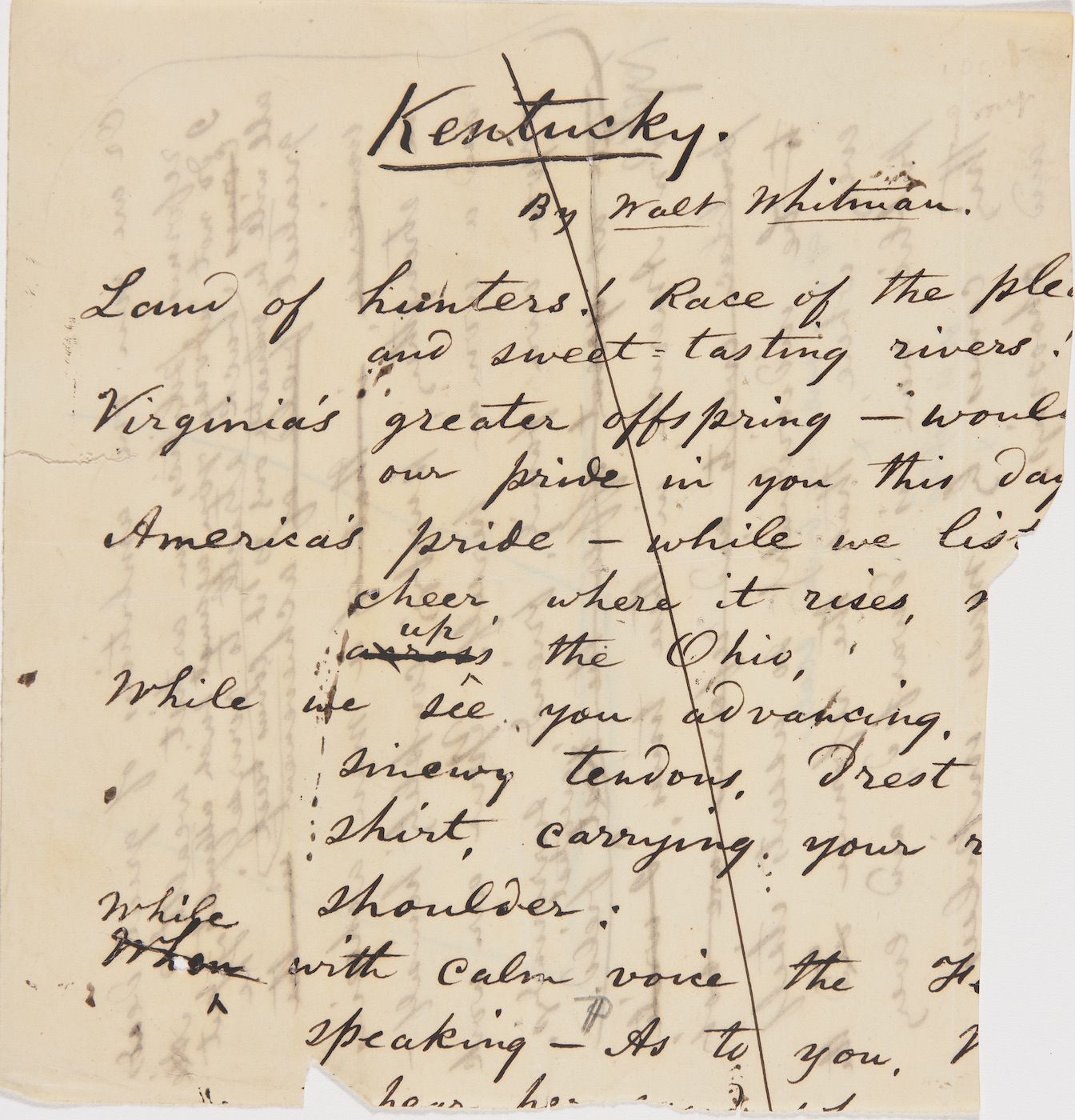 two fine Walt Whitman manuscripts - “The greatest achievement a man achieves in strengthening, purifying, completing himself – and a woman herself.”

Two pages on one leaf (5 3/4 x 5 1/2 in.). The recto with a discussion of the individual in America and the verso with “Kentucky.” “Kentucky” with losses at ends of each line, chips at edges, a few pale stains. Corrections, additions, and deletions in the author’s hand.

The first is an unpublished manuscript in which Whitman discusses two of the great themes of his writing: the work of strengthening, purifying, and completing oneself and the place of the individual in American democracy.

“Or are you one ambitious of great deeds, reforms, politics, an artist, wealth? I do not advise you against such attempts, but all will be valuable only as it comes back strictly to yourself. The greatest achievement a man achieves in strengthening, purifying, completing himself – and a woman herself. Your own work – your own family, friends, surroundings.

“Yet in America, in these times, [deleted: I write public events and reforms are not to be] individuality so asserts itself every where, and on such a broad scale, that the reformer or the public man is dwarf’d, and every thing comes or is settled by mass impulses and choosings.”

Whitman notably recognizes the fault in his initial phrasing and points out that the quest for self-perfection is open to women as well: “The greatest achievement a man achieves in strengthening, purifying, completing himself – and a woman herself.”

This is a truly representative Whitman manuscript reflecting the poet’s celebration of the individual and of the democratic masses in America. As he declared in an 1867 poem in Leaves of Grass, “One’s-self I sing, a simple separate person, / Yet utter the word Democratic, the word En-Masse.”

The second, written on the verso of “Or are you ambitious” manuscript, is an unpublished working manuscript from Whitman’s Civil War poem “Kentucky.”

Only a handful of leaves survive from “Kentucky,” which appears to have been intended for, but was never published in, the New York Tribune.

The Library of Congress holds six leaves from the poem, one of which, like the present, is written on the verso of a repurposed sheet. That example, a portion of a letter about Jesse Whitman’s employment, can be dated to 1861. This date thus seems likely for the present manuscript.

In the poem Whitman hails Kentucky’s steadfastness and vigor, contrasting the state with unfaithful Virginia, which has left the Union. Kentucky had rejected its native son Abraham Lincoln in the 1860 election, and there had been strong voices in favor of secession. Here Whitman celebrates Kentucky’s place in the Union and points to “America’s pride” in the state.

The present manuscript is boldly titled and signed by the poet, suggesting that Whitman intended it to be the beginning of the poem. The manuscript was apparently written on a narrow sheet that was later cropped along the right edge (words in brackets attempt to supply the lacunae). The manuscript begins,

“Land of hunters, Race of the pl[easant] and sweet tasting rivers. / Virginia’s greater offspring – would […] our pride in you this day […] / America’s pride – while we lis[ten and] cheer, where it rises, […] up the Ohio, / While we see you advancing, sinewy tendons, drest [in your hunting] shirt, carrying your [rifle on your] shoulder: / While with calm voice the […] speaking – As to you …”

This lyrical poem written at the outset of the Civil War provides valuable evidence of Whitman’s creative process.

This is an outstanding pair of manuscripts combining, in a single object, Whitman’s poetical reaction to the Civil War and his prose reflections on the nature and meaning of the individual and of the individual’s place in American society.