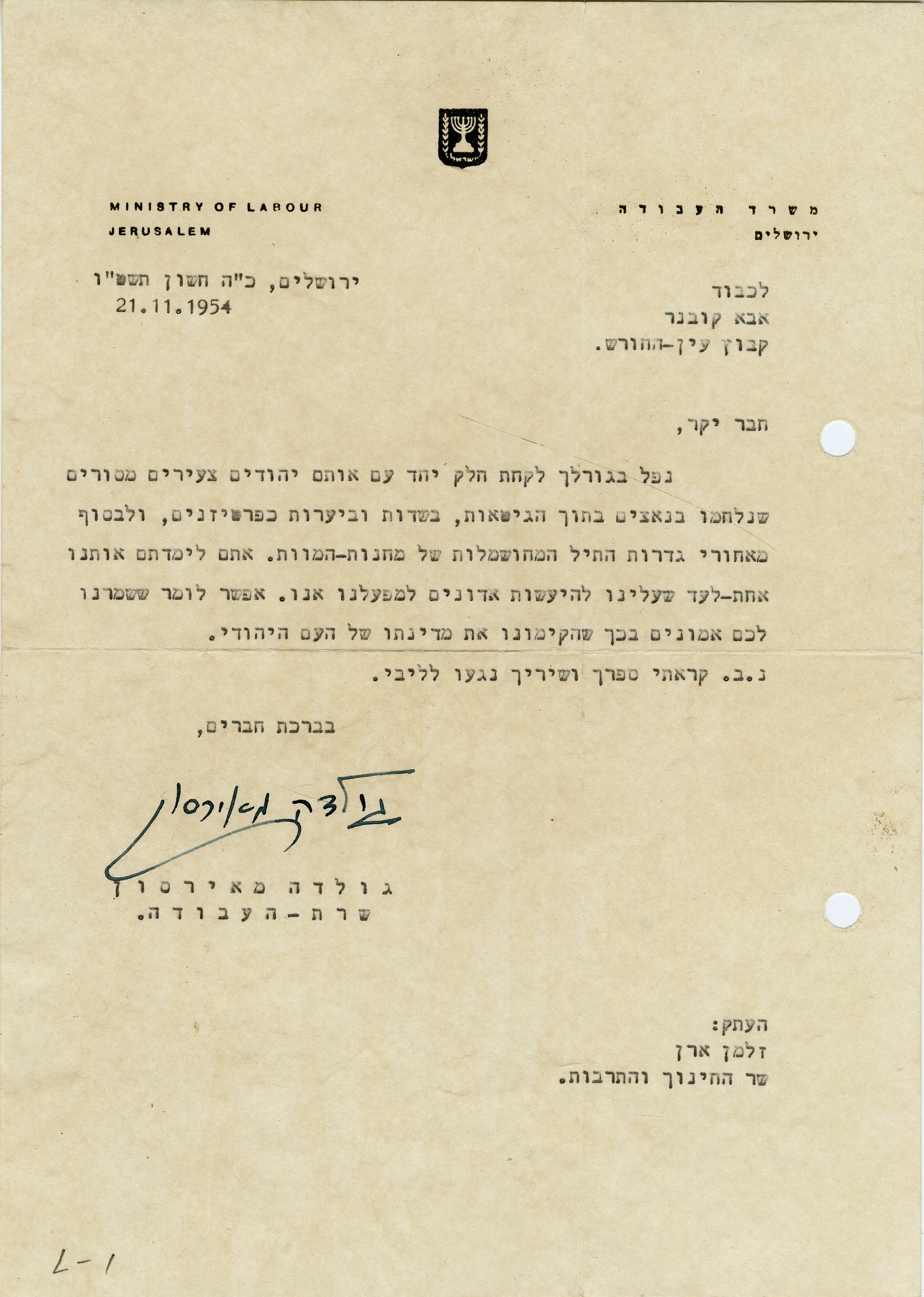 Golda Meir honors the leader of the Vilna Ghetto uprising

Golda Meir, a founder of the modern state of Israel, writes to Abba Kovner, who led the Vilna Ghetto Uprising and later became one of Israel’s leading poets. Meir, then Minister of Labor, writes,

“It has been your destiny to have taken part together with those young and dedicated Jews who fought against the Nazis in the ghetto, in the fields and in the forests as partisans, and at the end behind the electrified barbed wires of the death camps. You have taught us forever that we must become masters of our own destiny. It is possible to say that we have been true to you in as much as we have established a state for the Jewish people. … I have read your books and your poems have touched my heart.”

Golda Meir, the fourth prime minister of Israel, moved with her husband from Wisconsin to a kibbutz in Palestine in 1921, becoming active in Jewish political life. She was one of the signers of Israel’s Declaration of Independence in 1948. After years of service in the Knesset, including multiple cabinet posts, she became prime minister in 1969 and served until 1973. David Ben-Gurion once called her “the best man in the government.”

Abba Kovner was a Zionist in Vilna when the Nazis captured the city and established the Vilna Ghetto in 1941. Kovner issued a manifesto entitled “Let us not go like lambs to the slaughter!” The work, which called for Jews to take up arms against the Nazis, was the first instance in which a target of the Holocaust accused Germany of intending to eradicate the Jews of Europe. Kovner escaped to the forests outside Vilna where, for the remainder of the war, he commanded the guerrilla group called the Avengers (Nokmim). After the war, Kovner joined the secret organization Nakam which sought revenge on Germany including assassinating SS prisoners. In 1947, he joined the Yishuv’s paramilitary Haganah and became known for penning inspiring and controversial “battle pages” during the 1948 Arab-Israeli War. Later in life he helped establish several holocaust museums, including the Diaspora Museum in Tel Aviv. His many books helped cement his reputation as one of Israel’s great poets.

This is a splendid letter by Israel’s only female prime minister, Golda Meir, praising the work of a legendary Jewish folk-hero and fighter and referring to the establishment of “a state for the Jewish people.”