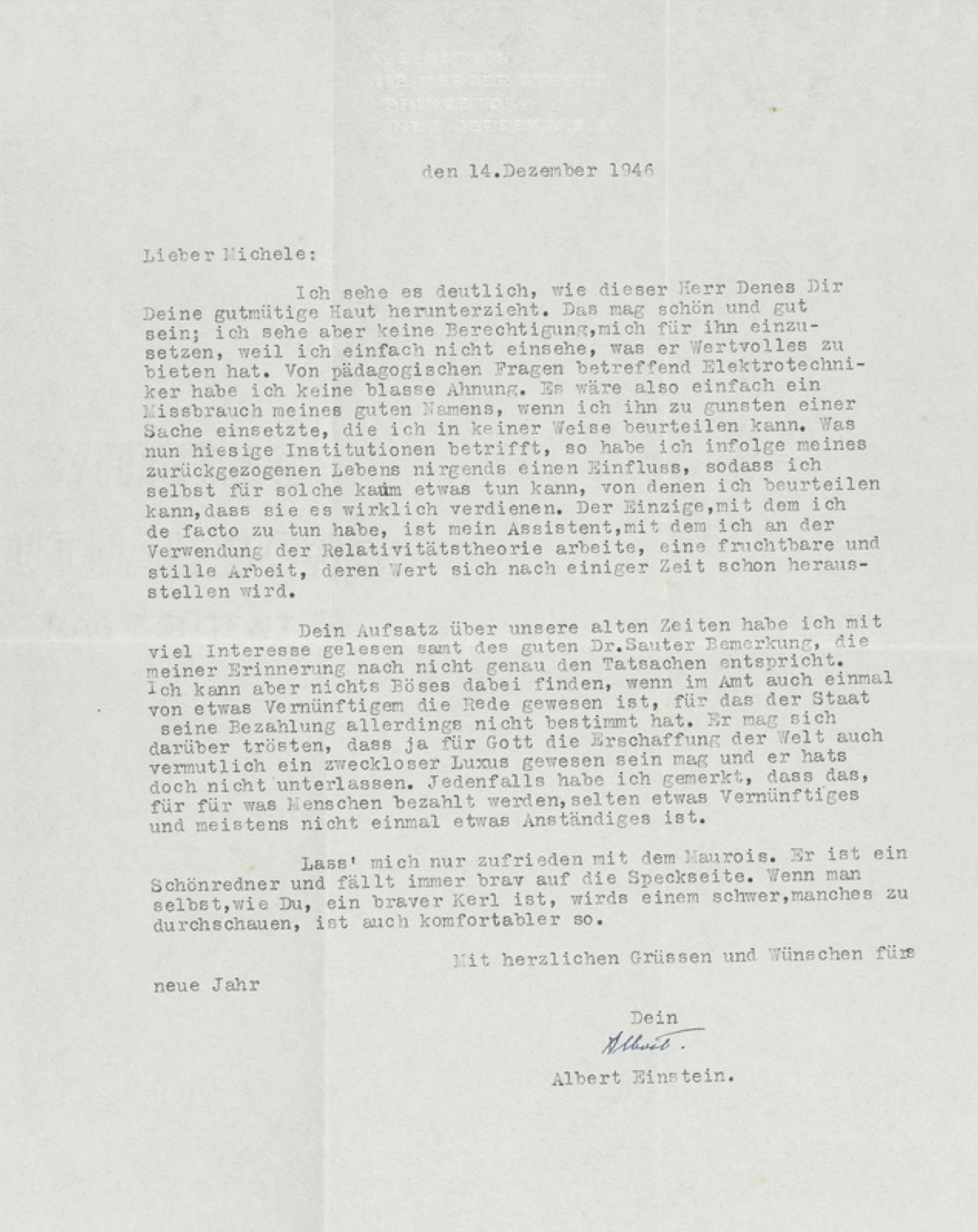 One page, in German. Einstein’s address blind-stamped at the top. Original envelope. Fine.

In this fine letter Einstein reminisces with his lifelong friend Michele Besso about their days at the Swiss Patent Office where together they developed the theory of special relativity. He likens their scientific conversations at the office to the work of God creating the world.

Einstein tells Besso, his friend of fifty years, that he has read with interest Besso’s memoir about their time together in the Swiss Patent Office. He then addresses a remark by their patent office colleague Joseph Sauter about their office discussions of scientific subjects:

“I can’t see anything bad in it if something rational was up for discussion at the office, even if the state had not meant to pay for it. It may be a consolation for him that for God, too, the creation of the world must have been a pointless luxury, yet He went ahead. Be that as it may, I have noticed that what people get paid for rarely is rational and most of the time not even respectable.”

Michele Besso was Einstein’s closest friend and only acknowledged collaborator during the celebrated early years of Einstein’s career. Besso helped get his friend a job at the patent office in Bern, where together the two developed the theory of special relativity. Einstein called Besso “the best sounding board in Europe” for scientific ideas. In his paper on special relativity Einstein wrote, “In conclusion, let me note that my friend and colleague M. Besso steadfastly stood by me in my work on the problem here discussed, and that I am indebted to him for many a valuable suggestion.”

Einstein describes his postwar life and work writing, “I have no influence anywhere due to the fact that I live very withdrawn, as a matter of fact I can barely do anything for people who, as far as I can tell, truly deserve it. The only person I deal with is my assistant with whom I work on the application of the relativity theory; it’s rewarding and quiet work whose value is sure to become evident at some point.”

This is a wonderful Einstein letter looking back on his most valued scientific and personal collaboration, which he compares to the work of God creating the world.