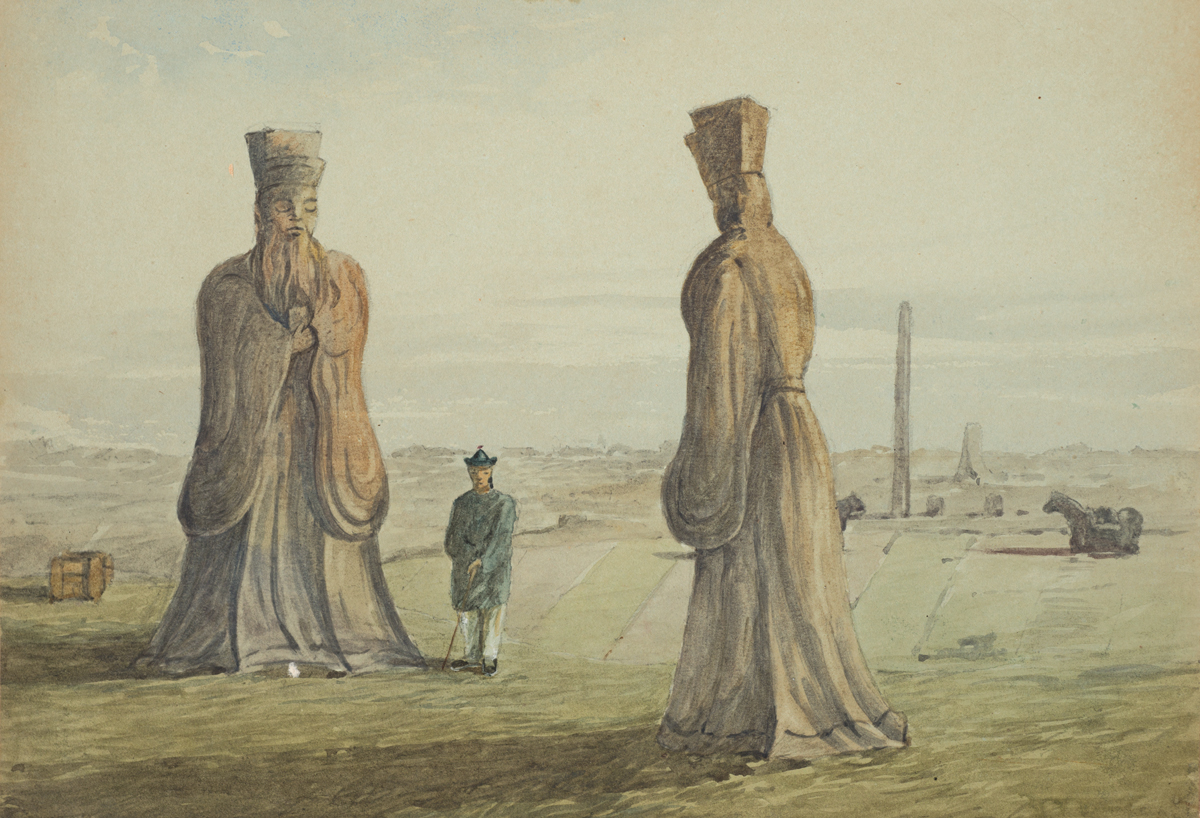 Watercolors of a Voyage to China and Japan

VOYAGE TO CHINA AND JAPAN IN FINE ENGLISH WATERCOLORS.

This is a splendid collection of watercolors by British naval officer James Henry Butt, a skilled draughtsman and keen observer traveling in China and Japan in the 1860s. The subjects of these finely rendered watercolors include ruins, temples, residences, panoramic city views, and landscapes in China and Japan. As trade with Japan was opened to the West in 1853 after two centuries of limited access, this is an early collection of original views of Japan by a westerner.

The splendid, wide-ranging China views include sites in Canton, Formosa, Shanghai, Amoy, and Foochow. Many of the watercolors include people and animals, giving these delightful images a great deal of vitality. Butt’s varied palette and imaginative choice of subjects has produced a captivating and varied suite of views. The drawings, each identified with a contemporary manuscript caption on the mount, are:

Canton from the heights

Burning house for the bodies of priests. Honam temple Canton

On the West Coast of Japan

Tombs of the Ronins. Yedo

Provenance. The talented amateur draughtsman James Henry Butt (1844-1936) served as an officer in the Royal Navy from 1863 to 1873, reaching the rank of Commander. Most of his service was on H.M.S. Sylvia, a wooden screw sloop of 865 tons, launched on 20 March 1866. The surveying vessel left Plymouth for China on 28 November 1866. Another album of views by Butt from this voyage is preserved at the National Maritime Museum, Greenwich. Butt presented the album to A. H. Phillpotts, Esq. according to the calligraphic title-page (a leading banker, Phillpotts was a director of HSBC and the Bank of British North America). Phillpotts presented the book to his brother in 1913, according to the inscription on the endpaper.

BIOGRAPHICAL NOTE We are grateful to Pieter van der Merwe, National Maritime Museum, Greenwich, for the following information: “James Henry Butt, [was] born in Gloucester, England, in 1844, the second son of an accountant. He probably entered the Navy about 1857-58 and was commissioned acting lieutenant from acting sub-lieutenant in September 1865. He was appointed second lieutenant of the survey vessel, HMS Sylvia on 11 October that year under Commander Edward Wolfe Brooker (1827–70) which ‘did good work on the coast of Formosa, on the west coast of Nipon [Japan] between Nagasaki and Simonoseki, in the inland sea of Japan, and at the entrance to the river Min in China’ (L. S. Dawson, Memoirs of Hydrography, 1885, p. 162).

“Brooker was invalided home from Yokohama in 1869 and the first lieutenant took over with Butt becoming third under a new second until he returned home from Hong Kong in 1870. During the commission, with another talented survey lieutenant called Maxwell, Butt took trouble (and found teachers) to learn passable spoken Japanese. “From 1871 to 1873 he was second lieutenant of the guardship Indus at Devonport but then retired from the Navy promoted to the reserve rank of Commander (which increased his pension). Thereafter he raised a family of eventually nine children in in Bristol (where he married Alice Lovell, a Bristol girl, in 1870), apparently later supplementing his naval pension both as a church organist and by selling his watercolours, since he certainly continued painting for the rest of his life. His youngest son, Richard, was born in Shanghai in 1892 so he and his wife must also have made a further Eastern voyage, though for what reason is unknown.

“In 1894 he briefly served a summer commission again on naval coaling duty and in 1895 his eldest son Alfred Lovell Butt, by then a 23-year-old naval engineer, died while serving in HMS Vulcan at Salonika, Greece. Butt left Bristol after 1901, and from 1906 to 1922 (his 62nd to 78th year) he exhibited coastal views at the Royal Cambrian Academy and the London Salon from ‘St Donat’s, Old Colwyn, North Wales’ (Denbighshire). Butt’s wife died at or near Conway in 1924, aged 77. He died, probably at Colwyn but certainly in that area on 4 January 1936, aged 91.”