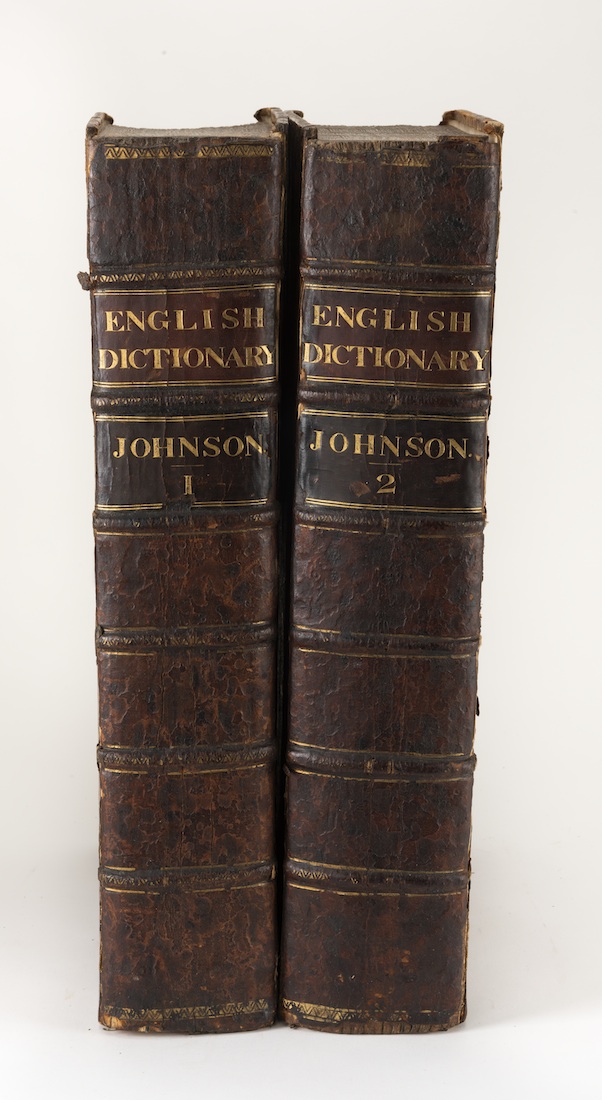 JOHNSON, SAMUEL. A Dictionary of the English Language

An outstanding copy of the first edition of this enduring classic of English literature. This is Johnson’s “audacious attempt to tame his unruly native tongue … combining huge erudition with a steely wit and remarkable clarity of thought” (Hitchings).

“Dr. Johnson performed with his Dictionary the most amazing, enduring, and endearing one-man feat in the field of lexicography … It is the dictionary itself which justifies Noah Webster’s statement that ‘Johnson’s writings had, in philology, the effect which Newton’s discoveries had in mathematics’” (PMM).

“To be sure, there had been dictionaries before his. The difference is that, while these were compiled, Johnson’s was written. … The glory of the book is that it is also a compendium of English literature, reprinting fine examples of words from the masters, often Shakespeare or Sir Francis Bacon. Johnson sought to ‘intersperse with verdure and flowers the dusty desarts of barren philology” (Smithsonian Book of Books).

Johnson illustrated the meanings of his 40,000 definitions with more than 100,000 quotations drawn from the time of Shakespeare down to Johnson’s own time. He wrote in the preface, “It is the fate of those that toil at the lower employments of life, to be rather driven by fear of evil, than attracted by the prospect of good; to be punished for neglect, where success would have been without applause, and diligence without reward. Among these unhappy mortals is the writer of dictionaries. Every other author may aspire to praise; the lexicographer can only hope to escape reproach.”

This enormous book is generally found rebound, rebacked, or in dilapidated condition. This splendid copy in original condition is one of only a handful of unrestored copies to appear for public sale in recent decades.