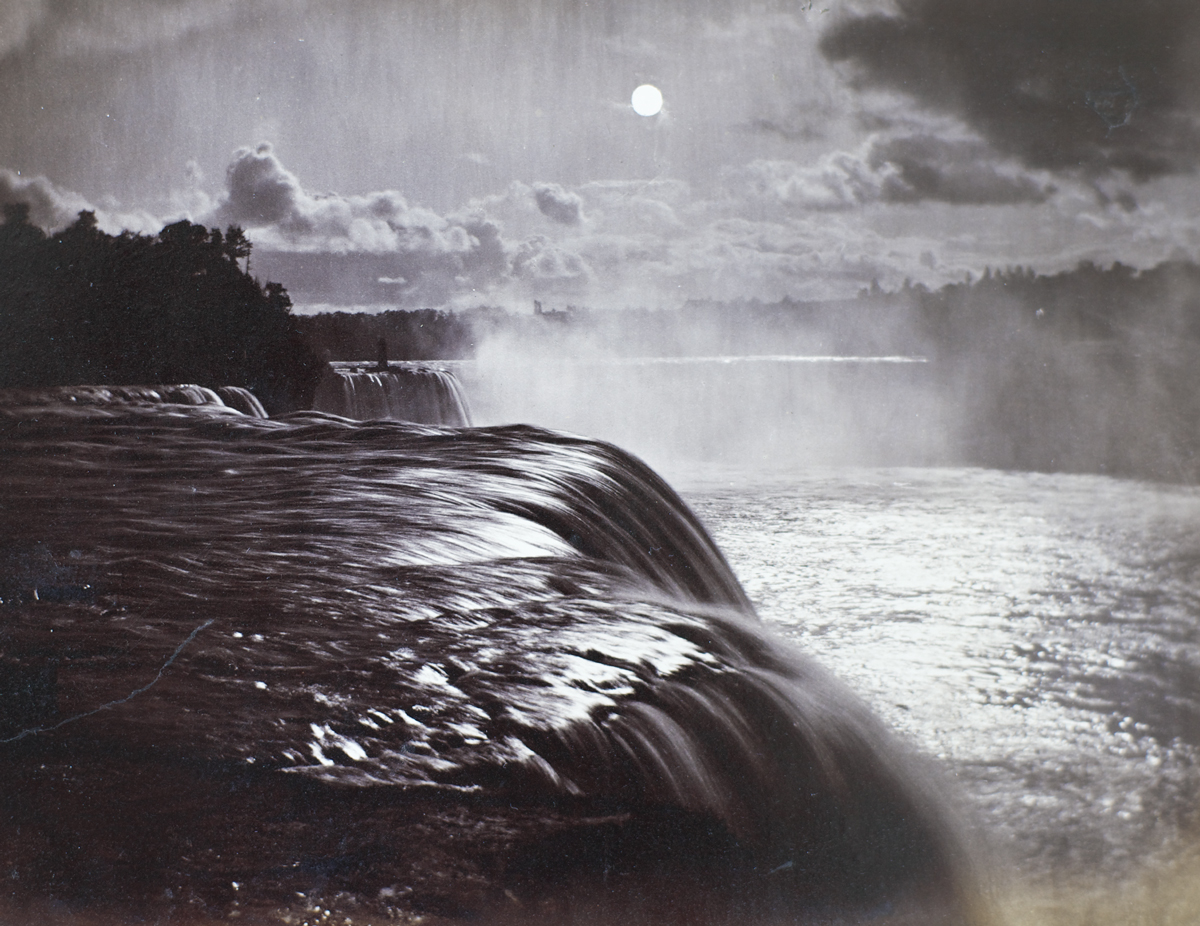 “There is no actual harm in making Niagara a background whereon to display one’s marvelous insignificance in a good strong light, but it requires a sort of superhuman self-complacency to enable one to do it.” – Mark Twain

20 albumen prints including 9 mammoth plate (16 x 20 in.) photographs, mounted. Half green morocco, gilt-stamped on the upper board “Niagara Falls.” Minor restoration to the attractive binding. Early German inscription on front pastedown, translated as follows: “From the estate of Uncle Erdwin and Aunt Tony Amsinck. The pictures are from the year 1867. (see their photo on the third-to-last page) Page 10, on the top left.” Slight staining, occasional foxing or fading to images.

An outstanding album containing beautiful and unusual images including, as its final image, one of the most remarkable North American photographs of the period.

This unique artistic photograph album is linked to three historically important Niagara Falls photographers: George Barker (a Canadian by birth who owned studios in both London, Ontario, and the Niagara Falls region), Platt D. Babbitt (with whom Barker is known to have worked), and Samuel J. Mason (a prominent portraitist and landscape photographer). The combination of their skills and the extraordinary vistas of the American and Canadian Niagara Falls has resulted in an album of photographs of great beauty. Further study is needed to make direct attributions for many of the photographs in the album.

Evidence suggests that many are by George Barker, but because a studio fire destroyed his archive in 1870, except his stereoviews, certain attribution is difficult. Several of the photographs show the suspension bridge connecting Ontario to New York, while others are unusually large and high quality photographs of Niagara Falls themselves. Photographs of Niagara Falls are not uncommon because the natural wonder has long attracted artists, admirers and visitors, but albums of this high quality, great beauty and large format are now rare. The final photograph, a particular highlight, is the impressive seemingly moonlit photograph, attributed to George Barker. This magnificent photograph compares favorably with the work of any of the great European or North American photographic artists of the period.

1. Barker, George (attr.). Niagara Falls, American and Horse Shoe/Canadian Falls. Albumen print, 6.75 x 8.75 in. Contemporary manuscript caption: “Niagara Falls.” Image related to Barker’s stereoview, “Prospect Point.” The final photograph of the album is an astonishing image of the Canadian and American Falls under what appears to be moonlight. Born in London, Ontario, George Barker became a very influential landscape photographer. At his death he was hailed as the “eminent photographer of Niagara Falls.” This photograph is clearly related to Barker’s stereoview Prospect Point. Both images were taken from the same vantage point and both demonstrate the illusion of night. Further, Barker’s stereoviews 927 American Fall— Moonlight—Niagara and Niagara Falls by Moonlight reflect the photographer’s desire to make pictures that looked like night. With these stunning images Barker showed that his accomplishments far surpassed those of ordinary 19th-century landscape photographers. The Charles Bierstadt photograph Falls from the New Bridge, Moonlight, Niagara, NY also relates to the present image, but because Bierstadt almost exclusively made stereoviews, attribution to that photographer is unlikely. Other than large- format photographs and stereoviews sold before 1870, little of Barker’s work survives because his archive was consumed in a fire in 1870, five years after he established his own photography business in Niagara. Pre-1870 images of this size and beauty are rare. This photograph was likely taken during the day and made to look like night through a complex compositing process in which two negatives were placed on top of each other during printing. Still, even during the day the long shutter speed of 19th-century cameras made it difficult to create photographs of this quality. This is among the most beautiful and haunting images we have ever encountered in an early North American photograph. It stands at the pinnacle of early American photography on paper.

2. The American Falls/Horse Shoe Falls/Canadian Falls. Albumen print, 5 3⁄4 x 8 inches with rounded edges. Contemporary manuscript caption: “The American Falls & Horse Shoe Fall.” This image showing a couple posing for a portrait is related to Samuel J. Mason’s stereoview, Portrait of Two Men Posing at the Top of Niagara Falls taken circa 1863. Mason advertised his portraits from this very spot, noting that his was “the only place where a Photograph of both the American and Canadian Falls, with Groups in the Foreground, can effectively be taken.” According to the inscription, this is a portrait of the honeymooning Amsincks who collected the images assembled in this album.

PROVENANCE The owners and compilers of this album were the German newlyweds Erdwin and Helene Marie Antonie Amsinck (identified in the inscription as “Uncle Erdwin and Aunt Tony”) who are shown in a portrait near the end of the album. The two, later to become noted patrons of the arts, were married in 1866 and honeymooned in America when this album was assembled in 1867. This album demonstrates the romantic attraction of Niagara Falls, which was a leading North American photographic destination from the beginnings of photography. The couple’s collecting and patronage of the arts became a lifelong interest. Around 1874 they established a major contemporary art gallery in Hamburg. When Erdwin died in 1897, the Erdwin Amsinck Foundation was formed, and after Antonie’s death in 1921, its assets were donated to the Hamburg Kunsthalle. These included a great collection of photographs and paintings as well as money to ensure its survival. The foundation continues to this day supporting young artists and artistic endeavors. This Niagara Falls album was preserved as a personal memento and remained with the family outside of the foundation holdings. The exceptional artistic taste of the Amsincks, manifest in these photographic selections, accounts for the astonishing quality of this album.