HOME  >  Browse  >  Photographs  >  Photographic Masterworks  >  An important collection of 40 mammoth-plate photographs of the American West, created for the 1876 Centennial Exposition in Philadelphia 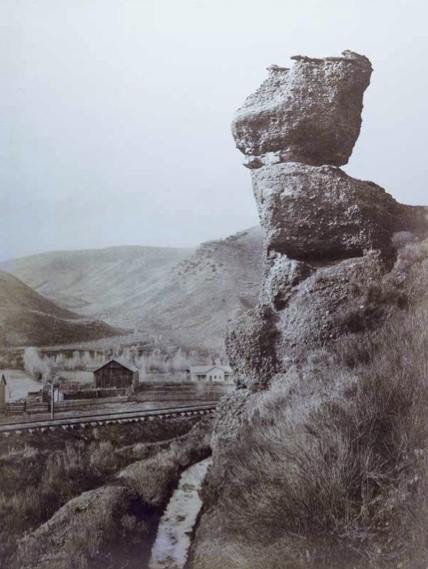 WATKINS, CARLETON. An important collection of 40 mammoth-plate photographs of the American West, created for the 1876 Centennial Exposition in Philadelphia

40 albumen prints, most approx. 16 x 20 in., original mounts, each with a fine calligraphic manuscript title and photographer credit, likely in the hand of master calligrapher Fulgenzio Seregni.

Carleton Watkins exhibited these very photographs at the 1876 Philadelphia Centennial Exposition, the first world’s fair in America.  Watkins is the greatest of the first generation of photographers of the American West. His early photographs of Yosemite and Utah have never been surpassed. When his work was exhibited back East, the New York Times declared, “As specimens of the photographic art they are unequaled. The views are … indescribably unique and beautiful. Nothing in the way of landscapes can be more impressive.”

These are all from Watkins’s earliest printings, the “Old Series” prints produced before 1875. This is likely the only surviving collection of Watkins’s mammoth plates selected by the master himself for exhibition, as other exhibition collections have been broken up and dispersed.

Weston Naef, the leading Watkins authority, in his definitive Carlton Watkins: Complete Mammoth Photographs, identifies twenty- seven of the photographs exhibited by Watkins at the Centennial Exposition in Philadelphia. Those twenty-seven are present here, excepting Three Brothers (Naef 169), which is the nearly identical Naef 170, issued with the same title.

The thirteen additional exhibition prints present in this collection help to complete our understanding of Watkins’s prominent role in the great fair in Philadelphia in 1876. They provide valuable information identifying for the first time Watkins’s artistic vision and intentions for the greatest exhibition held up to its time in America. The Centennial Exposition Collection of Watkins photographs remained intact with a Philadelphia family from the late nineteenth century until our acquisition of them by private treaty.

Carleton Watkins is the dominant figure in early photography of the American West. In a series of grueling expeditions over several decades, he then went into the wilderness with a wagon and a train of mules to carry hundreds of pounds of bulky equipment and heavy glass plates. The amazingly detailed photographs made with the unique mammoth-plate camera brought Watkins international renown.

For more than 150 years Watkins has retained his place as one of America’s greatest photographic artists. In 1999 Douglas R. Nickel, writing with the benefit of almost 135 years of photographic perspective, called Watkins’s photographs “the finest landscape photographs produced by an American in the nineteenth century, and some of the most sophisticated and arresting images ever produced with a camera.”

These forty photographs recall the words of the great naturalist Louis Agassiz, who wrote of Watkins’s photos: “I have never seen photographs equal to these, … [they] are the best illustrations I know of the physical character of any country.” Watkins made these prints in the 1860s and early 1870s. The several San Francisco Bay prints date to the early and mid 1860s. The majority of the Yosemite images date to the photographer’s trip to Yosemite in 1865-1866.

The rarest of these images are the stunning views made in Utah in 1873-4. Among Watkins’s rarest photographs, some of these exist in only one other known print. The outstanding Utah views in the Centennial Collection include Pulpit Rock and The Sentinel, both from Echo Canyon. Weston Naef called The Sentinel “magnificent and priceless,” a symbolic monument to male fertility and the “profoundest human drive.” Watkins’s rare views of Utah represent pinnacle achievements in nineteenth-century photography.

These photographs represent Watkins at the peak of his powers, during the “Old Series” years before bankruptcy cost him control of his negatives in late 1874 or early 1875. This collection comprises original pre-1876 prints made by Watkins and his staff from his original negatives to his exacting specifications, and presented with calligraphic titles, for exhibition.

The Centennial Exposition Collection’s rarity, beauty, and provenance mark it as one of the greatest bodies of Watkins mammoth-plate photography in the world. Significant groups of large format Watkins photographs are increasingly rare. Another group of 40 prints were auctioned separately in April, 2004 in New York. That collection brought a total of $2,000,000.

Watkins has selected not only his iconic Yosemite images but also the greatest photographs resulting from his Utah expedition, the culminating event of his Old Series period. This collection reflects Watkins’s own estimation of his greatest achievements in large-format photography during his epoch-making first fifteen years as a photographer.

Their exhibition in Philadelphia in 1876 marks a landmark in the history of photographic art and in the uniting of America, bringing the wonders of the West to Philadelphia and the other eastern centers of American culture.

A detailed inventory is available.