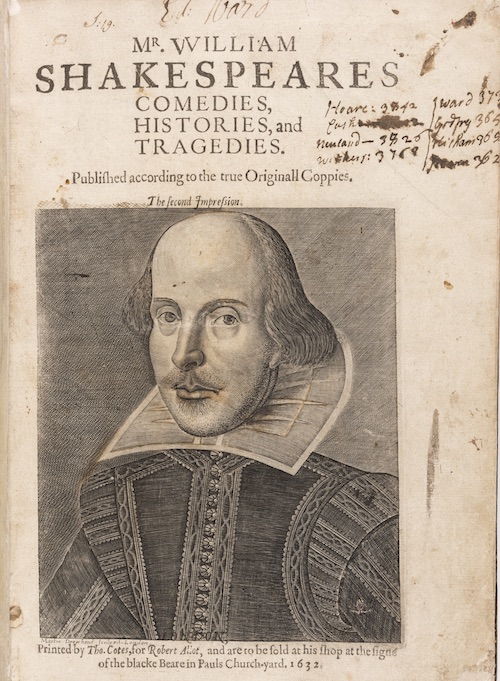 “Incomparably the most important work in the English language.”

Folio. 13 x 8 ½ inches. Title-page with the engraved portrait of Shakespeare by Martin Droeshout, with a short tear. Paneled calf ca. 1700, rebacked preserving portions of original spine, recornered, later endpapers, red sprinkled edges. Some restoration to first and last leaves, a few paper flaws and repairs, early handwritten notes on first two and last leaves. Some spotting and staining. An excellent, tall copy. STC 22274e.3 (the reissue with the A2.5 (title and its conjugate) printed on thicker paper, with “Blacke beare” in the imprint).

This is an excellent example of the Second Folio, the second edition of Shakespeare’s collected plays. This is “incomparably the most important work in the English language” (Jackson, Pforzheimer Catalogue).

The First Folio, published in 1623, was such a success that just nine years later the collection was printed again. The Second Folio venture was undertaken by a group of booksellers and rights holders, some of whom had been members of the First Folio syndicate. The massive book includes 36 plays, half of which had not been printed prior to the First Folio, as well as commendatory verses and dedicatory epistles by contemporary admirers of Shakespeare. One of these, John Milton’s “An Epitaph on the admirable Dramaticke Poet, W. Shakespeare,” was Milton’s first appearance in print.

For almost four centuries Shakespeare’s transcendent genius has been recognized. In 1623 Ben Jonson wrote of Shakespeare, “He was not of an age, but for all time.” In 1840 Thomas Carlyle called Shakespeare, “the chief of all poets hitherto, the greatest intellect who, in our recorded world, has left record of himself in the way of literature.” And Harold Bloom recently wrote, “There is no substitute for Shakespeare . . . Shakespeare is the Western Canon.”

With the First Folio now commanding $10,000,000, a Second Folio in an appealing early binding is one of the most desirable books in English literature.

Provenance: early signature of Edward Ward at head of title page; 1713 election vote totals for candidates standing for Parliament for the borough of London in manuscript on title; 18th-century armorial bookplate of the Earl of Rosebery.