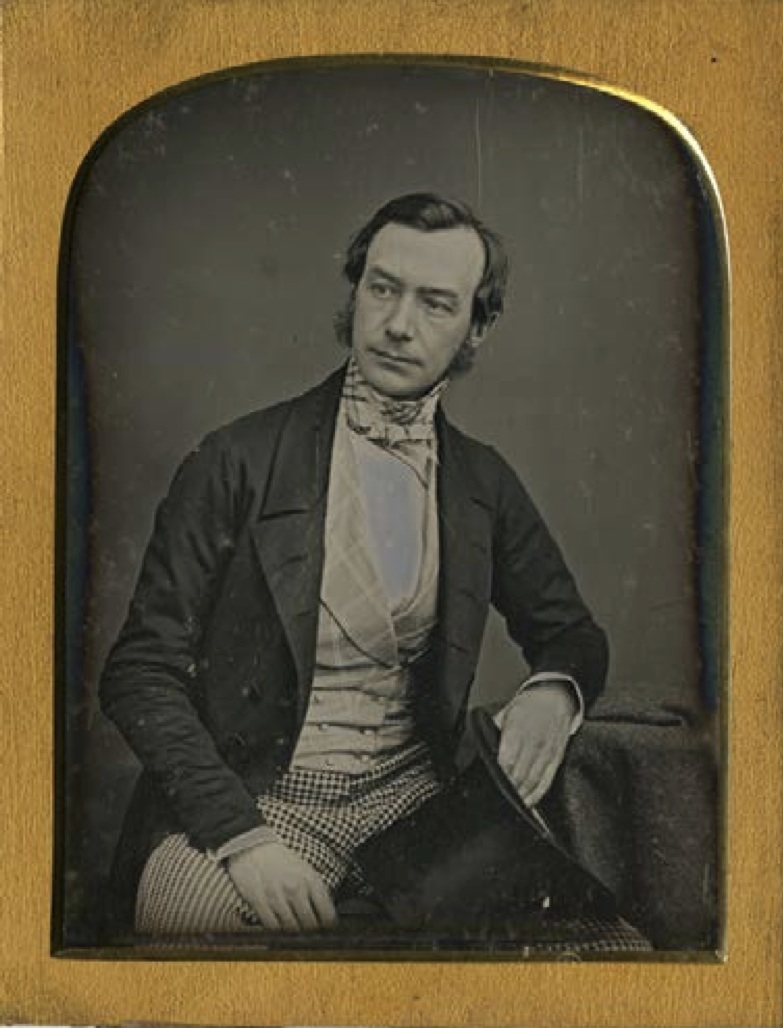 Fine daguerreotype of Herman Melville's agent and advisor in London

This is a splendid half-plate daguerreotype of Herman Melville’s advisor and agent John Brodhead, the noted scholar and diplomat.

John Romeyn Brodhead (1814-1873) was a historian and pioneering scholar of the early Dutch history of New York. In 1839 Governor William Seward appointed him to travel to Europe to collect documents to fill gaps in the state archives. “Brodhead spent the next four years in The Netherlands, France and England, amassing 80 volumes of transcriptions.  He occasionally encountered some resistance to these investigations and so had to enlist the support of such American representatives as Mr. Bleecker at The Hague, General Lewis Cass in Paris, and Ambassador Edward Everett in London.  In August 1844 he returned to New York with his valuable cargo.  Historian George Bancroft said: “’The ship in which he came back was more richly freighted with new materials for American history than any that ever crossed the Atlantic’” (New York State Library). His findings were published over the coming decades in fifteen volumes as Documents Relating to the Colonial History of New York.

Brodhead’s work in Europe led him to work in the American diplomatic corps including service under Bancroft as secretary to the American legation in London. In 1855 he declined Pierce’s offer to become the first American ambassador to Japan, preferring to remain in New York.

Today he may be best remembered for his services as Herman Melville’s agent in London. Brodhead had known Melville and his family since their youth. Gansevoort Melville, secretary of the American legation in London, served as his brother’s literary agent for the publication of Typee. When Gansevoort died in May 1846, his boyhood friend John Brodhead was appointed to succeed him.

Brodhead’s literary relationship with the young author began with Melville’s letter of December 30, 1846, in which he pleaded for Brodhead to help him, noting that “your declining to do so will not only place me in a very unpleasant predicament, but will occasion me no small pecuniary loss.” Brodhead accepted, and soon he was caught in the middle of convoluted negotiations with Melville’s English publishers and with English Customs. In February 1847, proof sheets of the as-yet unpublished second book Omoo were sent to London for the preparation of an English edition. English Customs seized the sheets, thinking them to be a piracy of an English edition. It was left to Brodhead to extricate Melville from the situation. Melville’s English publisher, John Murray, corresponded with Brodhead, discussing financial, copyright, and publication issues. The following year Brodhead provided the same vital services to Melville to secure the English publication of Mardi by Richard Bentley.

John Jabez Edwin Mayall, born in England in 1813, emigrated to Philadelphia in 1842 and learned the art of making daguerreotypes and established a studio. He returned to England in 1846, and in 1847 he established his American Daguerreotype Institution. At the time this portrait was made, Mayall was often visited by J. M. W. Turner, who was interested in the light effects in Mayall’s photographs. Mayall helped to pioneer the CDV, and in the 1850s he developed the first Ivorytype process.

This is a splendid, well-documented half-plate daguerreotype of a significant American historian and an important figure in Melville’s life and career.