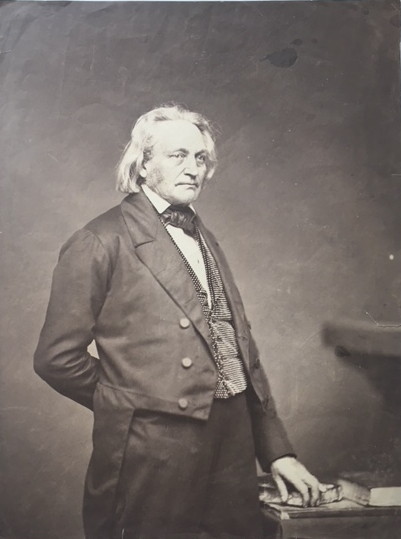 This is a delightful Brady Imperial salt print portrait of one of the fascinating political and literary characters of mid-nineteenth-century New York, David T. Valentine.

David T. Valentine was clerk of the Common Council of New York (now City Council) and an avid collector of historical materials. His classic annual Manual of the Corporation of the City of New York (1841-1867), better known as Valentine’s Manual, has long been one of the most valuable resources for scholars and aficionados of New York history.

The New York Times review of the Manual for 1863 noted, “Services to posterity of this nature are generally tendered at the sacrifice of the present, and it is a happy coincidence which has placed Mr. VALENTINE in a position of such usefulness both to our own and to succeeding generations. … If any one among us may calculate surely on a sublunary immortality, Mr. VALENTINE is the man. He has linked his name indissolubly with one of the greatest cities in the world in a manner ‘which time shall strengthen not efface.’ As the laborious digger and delver among old Dutch manuscripts in search of the first faint traces of the municipal existence of New Amsterdam, or as the recorder of the rising glories and meridian splendors of the New-York of our own day, his name will meet the future investigator as every step.”