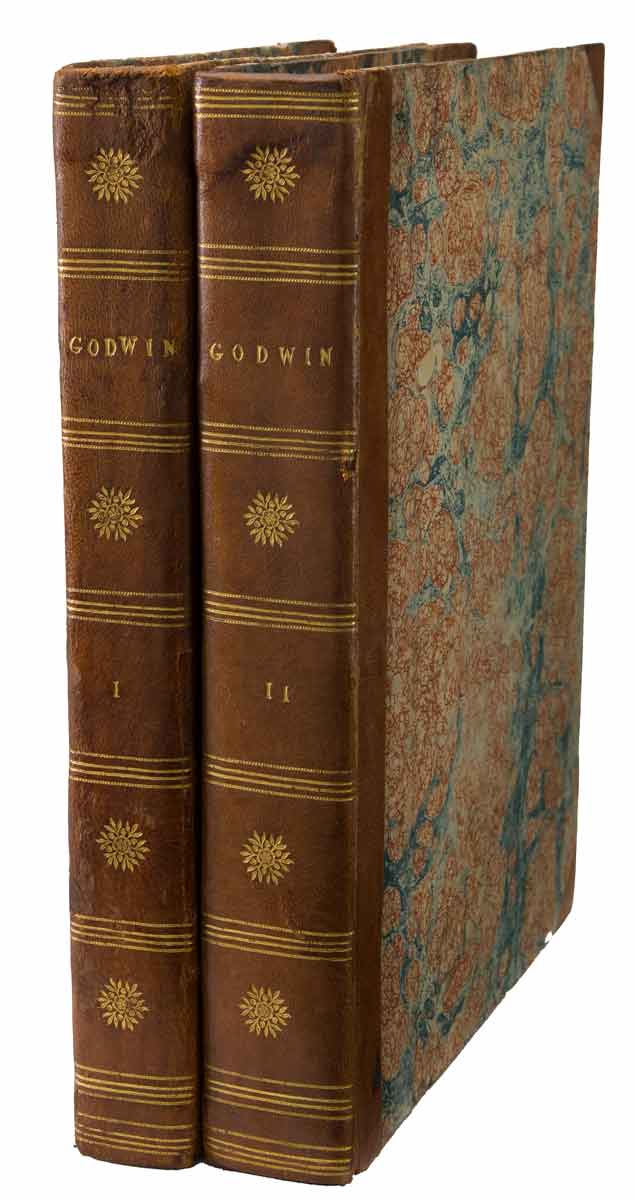 “Every man has a certain sphere of discretion which he has a right to expect shall not be infringed by his neighbours. This right flows from the very nature of man.”

FIRST EDITION. In Political Justice, his most famous work, Godwin responds to Burke’s attacks on the French Revolution and Thomas Paine. He applies the principles of the Revolution to inquire into the philosophical basis of government. Believing that political and social institutions are tyrannical and corrupt, Godwin calls for reason to guide human affairs and advocates individual liberty.

The Enquiry Concerning Political Justice was “one of the earliest, the clearest, and most absolute theoretical expositions of socialist and anarchist doctrine. Godwin believed that the motives of all human action were subject to reason, that reason taught benevolence, and that therefore all rational creatures could live in harmony without laws and institutions. Believing in the perfectibility of man, he thought that ‘our virtues and vices may be traced to the incidents which make the history of our lives, and if these incidents could be divested of every improper tendency, vice would be extirpated from the world.’  All control of man by man was intolerable and ‘government by its very nature counteracts the improvement of original mind.’  The time would come, he maintained, when every man, by doing what seemed right in his own eyes, would also be doing what was best for all men, because all, through discussion, would be guided by purely rational principles. … It is to be doubted if anyone fully accepted this out-and-out radicalism, but Godwin’s passionate advocacy of individualism, his trust in the fundamental goodness of man, and his opposition to all restrictions on liberty, have endured” (PMM).

Godwin “tried to maintain his philosophic dignity while treating Shelley as a seducer for acting on the principles of Political Justice. Upon Shelley’s marriage, December 1816, he was reconciled, and the poet’s veneration for the philosopher disappeared on the discovery that Godwin was fully sensible of the connection with the heir to a good estate. Godwin, constantly sinking into deeper embarrassment, tried to extort money from his son-in-law until Shelley’s death, and Shelley did his best to supply the venerable horseleech” (DNB).

This is a very fine copy in an unrestored contemporary binding.