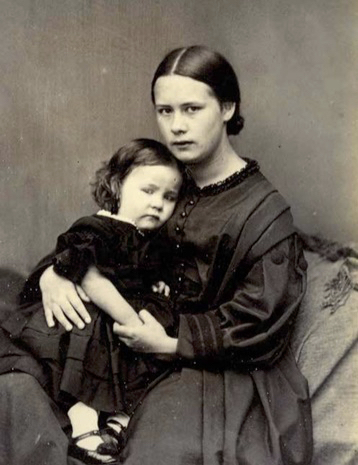 This tremendous discovery is the extensive photographic archive of the little-known Victorian photographer Emma Frances Johnston. This is apparently the earliest comprehensive archive of a female photographer in private hands. Beginning around 1858, Johnston made this wonderful series of portraits of her friends and extended family comprising the intellectual and social world of nineteenth- century Hampstead in London.

The introduction of the wet collodion process in the 1850s brought a minor wave of amateur photographers, very few of them women. At around the time that Emma Johnston was making her portraits in Hampstead, Lady Clementine Hawarden began to make her photographs. Julia Margaret Cameron took up photography when she received a camera as a gift in 1863.

This unique collection is essentially the only known source for the study of Emma Johnston and her portraits. She was one of the three children of James, a solicitor, and Mary. Her sister Jane married the Reverend Hesketh Hanson, but Emma never married. She took up photography in her twenties, posing family and friends for hundreds of portraits, often outdoors.

Most of these photographs were taken in the gardens of her home Manor House. Several pieces of furniture reappear in what a later caption describes as a Pond Street house. A few images show Manor House, North End Gardens, and nearby cottages. Miss Johnston also experimented with stereoscopic photography. Her “Numerical List” manuscript index details some 37 stereo negatives. Three survive in this archive, depicting the photographer’s mother and various children outdoors in Hampstead. This manuscript list of negatives, a rare survival, reveals that Emma Johnston made some three hundred exposures that she considered worth listing.

The introduction of passenger rail service connecting Hampstead with central London in the 1860s accelerated the growth of the picturesque village. Johnston knew and photographed a wide range of scientists, intellectuals, diplomats, architects, and artists, and she also valued her interactions with the friends, children, and pets of the neighborhood.

Johnston was a woman of independent means who had the talent, determination, and wherewithal to pursue her interest in the male-dominated field of photography. She died in 1905 at age seventy.

This is a major resource for the study of early photography by women. The discovery of a major intact archive by an accomplished early female photographer is an important event.