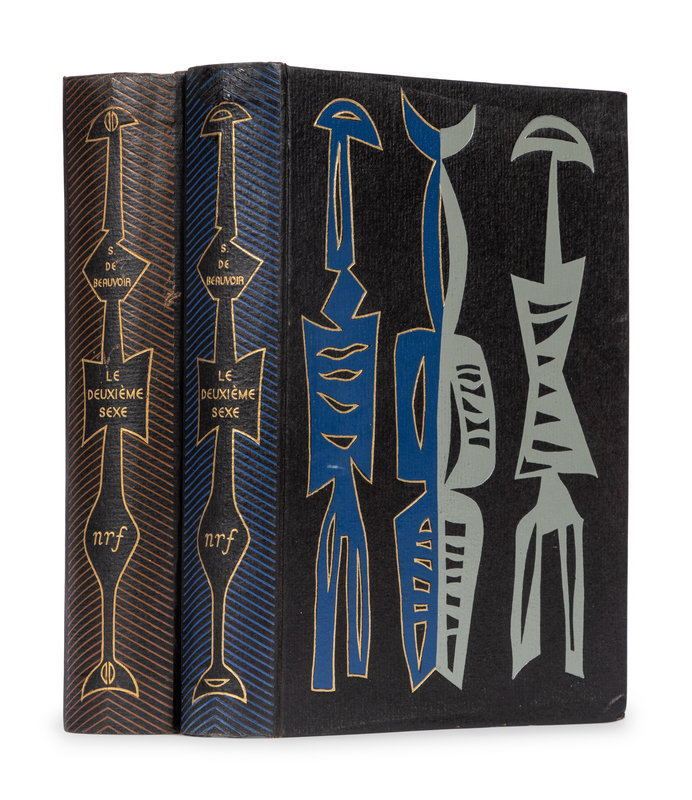 FIRST EDITIONS. The two volumes were published months apart in 1949, each in an edition of 2000 numbered copies (from a total edition of 2,150).

This landmark of feminism presents a scathing analysis of the history and treatment of women in the patriarchal West. Beauvoir begins by asking, “What is woman?” She argues that man is the default, while woman is Other: “Thus humanity is male and man defines woman not herself but as relative to him.”

“To state the question is, to me, to suggest, at once, a preliminary answer. The fact that I ask it is in itself significant. A man would never set out to write a book on the peculiar situation of the human male. But if I wish to define myself, I must first of all say: ‘I am a woman’; on this truth must be based all further discussion. A man never begins by presenting himself as an individual of a certain sex; it goes without saying that he is a man …”

“The Second Sex was published in France in 1949, a year after the author—a thirty-eight-year-old public intellectual—was allowed to vote for the first time. French women, so belatedly enfranchised, would not have access to legal birth control until 1967, or to legal first-trimester abortions until 1975” (Judith Thurman).

The Second Sex has been translated into more than a dozen languages and has sold millions of copies. It is central work in the transition from the feminism of the woman suffrage era to the second wave feminism of the second half of the 20th century and beyond.

A beautiful set of this landmark work.