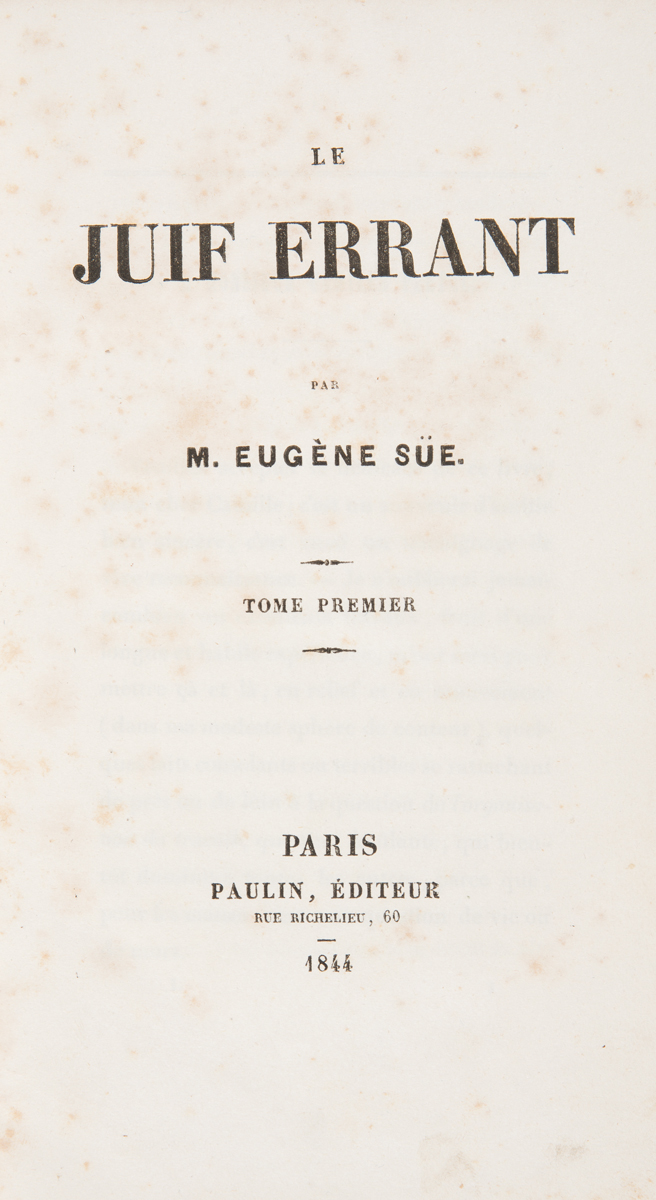 First edition of Sue’s The Wandering Jew. This is the rare first edition in book form, preceding the far more common illustrated and popular editions that soon followed.
Sue’s Le Juif Errant, a classic of French nineteenth-century popular fiction, was written at the height of the age of Balzac, Dumas, and Hugo.

According to Sue’s novel the Huguenot Rennepont family lost its wealth during the French Catholic persecution. What little remained was entrusted to the Jewish banker Samuel who, with his heirs, turned the money into a fortune over 150 years. The terms of the arrangement called for the descendants to meet at a certain address in Paris in 1832 to divide the inheritance. This book is the story of the seven remaining members of the family and the efforts of the Jesuits to eliminate them and claim the fortune for themselves. The old Jewish banker appears at the novel’s end proclaiming an end to the curse of the Wandering Jew.

“Eugene Sue wrote his Juif Errant in 1844. From the latter work … most people derive their knowledge of the legend” (Jewish Encyclopedia). The medieval story of the Wandering Jew describes a Jew who taunted Jesus on the way to his crucifixion, saying, “Go on more quickly.” Jesus replied, “I go, but thou shalt wait till I return,” thereby condemning the man to roam the earth until the Second Coming. Oral tradition, song, and popular literature perpetuated the long-lived anti-Semitic legend and described supposed sightings of the Wandering Jew.

“Sue was, like Dumas, an improviser, and possessed remarkable fecundity and invention. To these qualities add the instinct for portraying the weird and the terrible, and it is not hard to understand why he was popular in his day, and retains a good share of that popularity still” (Warner).

The first edition is rarely encountered in a contemporary binding complete with all half-titles. Only one set appears in the auction records of the past twenty-five years.