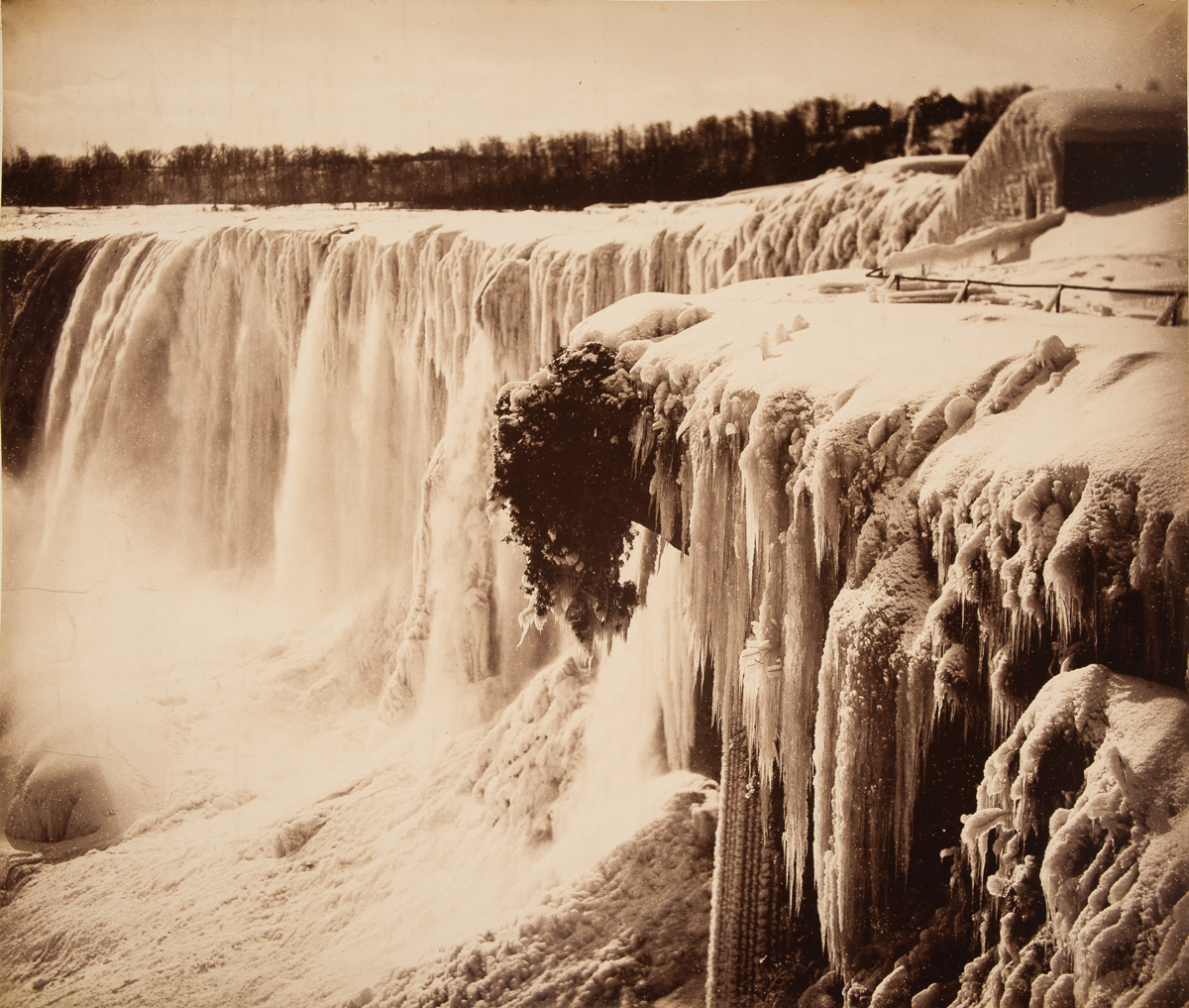 (AMERICAN WEST.), Watkins, Taber, Savage, and others. Magnificent Album of Mammoth Photographs of the American West, with other subjects

The album features a major new discovery, Carleton Watkins’s Sentinel Rock, Down the Valley, from U. Point, Yosemite, which is not in Naef and Hult-Lewis, Carleton Watkins: Complete Mammoth Photographs. Weston Naef has examined this print and confirms that it is the only located example of the long-sought negative 684, known only from inventories until now.

“As specimens of the photographic art they are unequaled. The views are … indescribably unique and beautiful. Nothing in the way of landscapes can be more impressive.” –New York Times on Watkins’s Yosemite photographs, 1862.

Carleton Watkins was the greatest of the first generation of photographers of the American West. His early photographs of Yosemite and Utah have never been surpassed.

The scale of Watkins’s monumental subjects was matched by his ambition and drive, which dwarfed that of his competitors. The photographer commissioned a San Francisco cabinetmaker to create a camera capable of accommodating glass plates as large as 18 x 22 inches. In a series of grueling expeditions over several decades, he took into the wilderness a wagon and a train of mules carrying hundreds of pounds of equipment and heavy glass plates. The amazingly detailed photographs made with the unique mammoth-plate camera brought Watkins international renown. The first four Yosemite photographs in this album date to Watkins’s first expedition (1865-1866). Watkins chose thirty of these for exhibition at the 1867 Paris Exposition, where he won the first-prize medal for landscape photographs. Four of those photographs are present here.

For more than 150 years Watkins has retained his place as one of America’s greatest photographic artists. Watkins’s views are “the finest landscape photographs produced by an American in the nineteenth century, and some of the most sophisticated and arresting images ever produced with a camera” (Nickel).

The album includes the following mammoth Watkins prints: Section of the Grizzly Giant with Galen Clark, Mariposa Grove (1865-1866); Yosemite Falls, from Glacier Point (1865-1866); Cathedral Spires, Yosemite (1865-1866); Grizzly Giant with a Group of Hunters at the Foot of the Tree, Mariposa Grove, Yosemite (1865-1866); The City from the Residence of Bishop Kip, Rincon Hill, San Francisco (1864-1865); Sugar Loaf Island and Seal Rocks, Farallon Islands (1868-1869); and Sentinel Rock, Down the Valley, from U. Point, Yosemite, Cal. (c. 1870). The last of these is not in Naef and Hult-Lewis. Weston Naef reports that this is undoubtedly Watkins’s Sentinel Rock, the long-sought negative 684. According to Naef, this may be the only extant print of this photograph.

Isaiah Taber was a dominant figure in Western photography after the Civil War. He came to San Francisco in 1864 and founded a gallery in 1871. In the winter of 1875-76, Carleton Watkins went bankrupt, and Taber acquired his gallery and his enormous collection of negatives. “Once he had acquired Watkins’s gallery and negatives, Taber began his bid for the exalted position of premier photographer of the west coast” (Palmquist, Pioneer Photographers of the Far West). Many of Watkins’s prints were released with Taber’s imprint but retaining Watkins’s personal numbering scheme, as in this album. In 1906 the San Francisco earthquake ended Taber’s career, destroying his premises and an estimated twenty tons of view negatives and eighty tons of portrait negatives.

English-born photographer Charles R. Savage joined the Church of Jesus Christ of Latter-day Saints at the age of 14 in 1846. Having learned the art of photography in New York, he came to Utah in 1860 and established what became the leading gallery in the state. He made scenic views and documented great events, but he is best known for his early views of Mormon settlements, especially Salt Lake City. Savage worked for Carleton Watkins in San Francisco for three months in 1873, immeasurably improving the quality of his work in Utah. Savage noted in his journal that Watkins’s photographs were “second to none in either the eastern or western hemispheres.” Because his studio was destroyed by fire in 1883, Savage’s earlier work is scarce. He continued to make photographs until his death in 1901. The dates of the photographs in the collection vary: Savage made some as early as 1865 and took others in the early 1890s.

“Of all the photographers who photographed the Salt Lake temple, Savage was by far the most prolific and influential. His inspiration spread far beyond the confines of his work. He was, after all, mentor to most of the temple’s photographers” (Wadsworth, Set in Stone, Fixed in Glass: The Great Mormon Temple and Its Photographers).

The album concludes with a series of eight mammoth photographs of a European mountain resort town, likely Chamonix, Mont Blanc with glaciers and other spectacular scenery.

Provenance: Weetman Dickinson Pearson (1856-1927), owner of the Pearson conglomerate, one of the world’s largest construction and petroleum companies. Pearson, who played a central role in developing Mexican railroads, mining, and oil, evidently acquired the photographs on one of his many trips to America.

This superb volume, containing 21 mammoth photographs of iconic American sites, is one of the finest large-format landscape albums to appear for sale in many years.