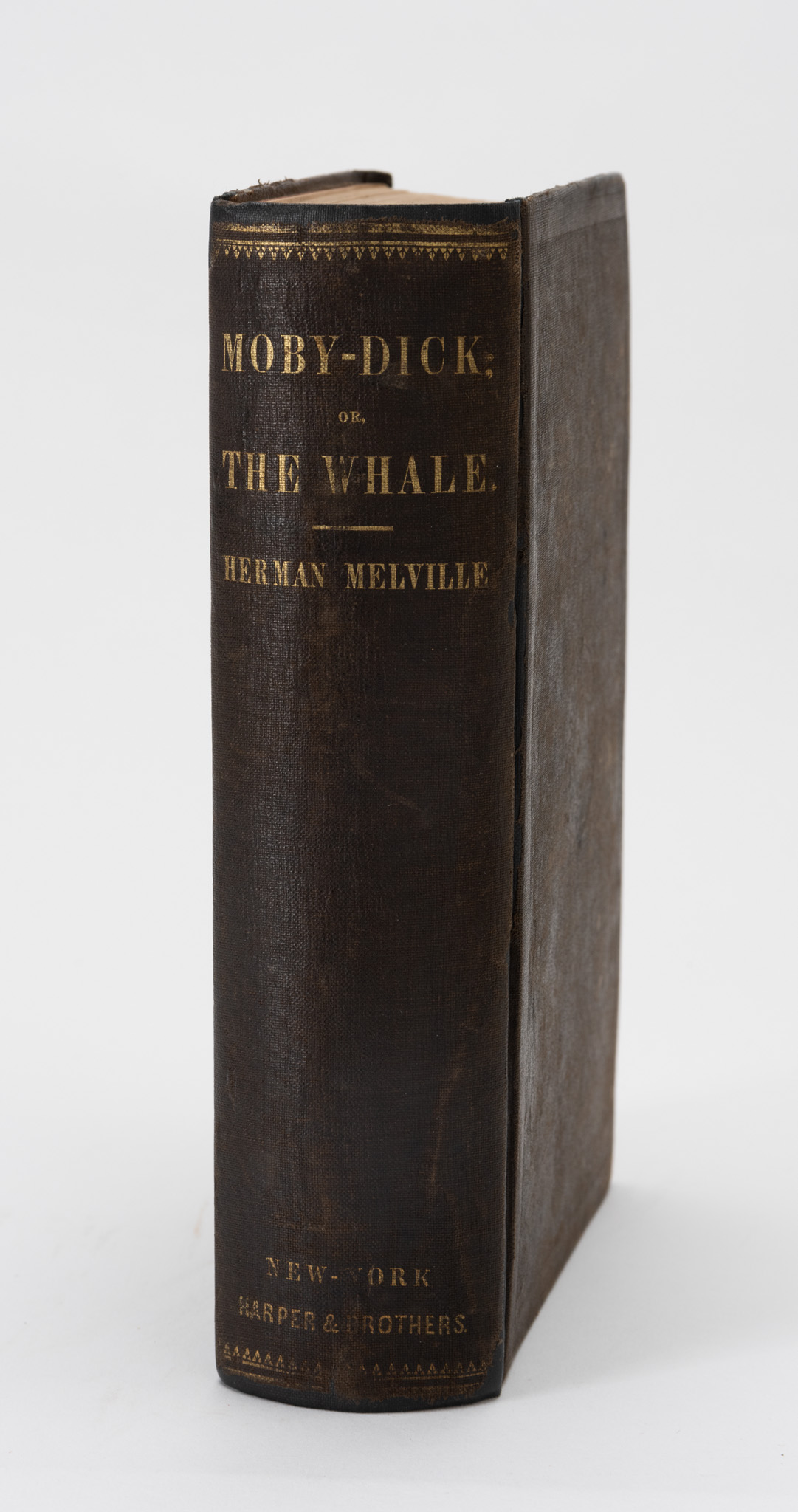 “A whale ship was my Yale College and my Harvard” – Herman Melville, Moby Dick

MELVILLE, HERMAN. Moby-Dick; or, the Whale

FIRST AMERICAN EDITION. “Moby-Dick is a story of the sea … Moby-Dick is a portrait of the whale” (Lewis Mumford). As late as May of 1850 Melville described this first Moby-Dick as “the Whaling voyage” in a letter to Richard Henry Dana:  “It will be a strange sort of book, I fear, blubber is blubber you know; tho you may get oil out of it, the poetry runs as hard as sap from a frozen maple tree & to cook the thing up one needs throw in a little fancy. The descriptions are the finest, most accurate and entertaining of any narrative of sea life that has ever been published.”

In an 1850 essay on Nathaniel Hawthorne, the dedicatee of Moby-Dick, Melville reflected on the mysteries of literary genius: “I somehow cling to the strange fancy, that in all men hiddenly reside certain wondrous, occult properties … which by some happy but very rare accident … may chance to be called forth here on earth.”  On completing Moby-Dick, Melville wrote to his friend Hawthorne, “I have written a wicked book and feel as spotless as the lamb!”  Melville dedicated the work to Hawthorne in part because Hawthorne’s Mosses From an Old Manse (1846) brought Melville into contact with literary explorations of the supernatural and the cloaked realms of madness and evil latent in the minds of men.

Yielding to the temptation to explore those “wondrous, occult properties,” Melville reconceived Moby-Dick as an epic of man’s psychological struggles in confronting the mysteries and power of nature and fate. This great tension defines the “second” Moby-Dick  The dedication of Melville’s great work acknowledges his indebtedness to Hawthorne. The growth of Moby Dick from a mere sea tale into a profound exploration of man’s inner turmoil marks Melville’s transformation from a writer of fictionalized Pacific voyages into the great author of America’s most important novel. Modern literary scholars remain mesmerized by this great monster of a tale. As Louis Mumford wrote, “Moby-Dick is a portrait of the Whale and a presentation of the demonic energies of the universe . . . Moby-Dick is a labyrinth and that labyrinth is the universe.”

Yet despite the greatness of the book after completing his masterwork Melville toiled in obscurity as he had predicted to Hawthorne in 1850, “But I was talking about ‘The Whale.’  As the fishermen say, ‘he’s in his flurry’ when I left him some three weeks ago. I’m going to take him by his jaw, however, before long, and finish him up in some fashion or other. What’s the use of elaborating what, in its very essence, is so short-lived as a modern book?  Tho’ I wrote the Gospels in this century, I should die in the gutter.”

Melville was rescued from obscurity and elevated to the ranks of the greatest American authors in the first part of the 20th century, and Moby-Dick remains the most sought-after American novel of the nineteenth century.