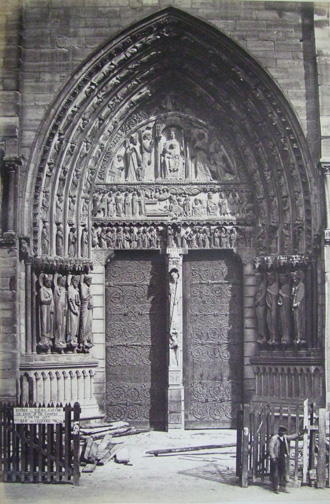 (ARCHITECTURE). Photographic album of Gothic architecture and proposed designs for the Royal Courts of Justice, London

The images range from the great cathedrals and ruined abbeys of England and Europe to nineteenth-century English parish churches and country houses in the Gothic style. Panoramic views, doorways, facades, windows, columns, architectural details, and interiors are all represented.

The album is a valuable resource for the study of Gothic architecture and for the history of the famous and obscure buildings it documents.

Given the collection’s wide-ranging coverage of Gothic architecture and its inclusion of photographs of eleven of the architect’s own drawings, this album may have been a reference collection assembled by George Edmund Street, the leading English architect of his day. Street’s career culminated in his design of the Law Courts of London, the nation’s greatest public building in the second half of the nineteenth century. In 1868 the eleven architects competing for the commission submitted designs placing of the building on the Thames Embankment. Street won the competition, “the greatest architectural prize in this generation” (Barry). Drawing on his intensive study of Gothic architecture, Street designed the immense, dramatic building from its foundation to its elaborate carvings and spires, dazzling the judges with his finely wrought original drawings. Construction began in 1873 and was completed in late 1882, a year after Street’s death due to over-work and exhaustion.