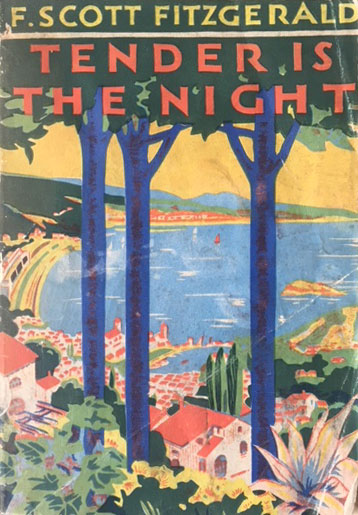 one of the great Fitzgerald rarities

Original pictorial wrappers made by the publisher from the dust jacket. Some restoration to rear wrapper affecting the right margin of the jacket copy, marginal stain to p. 27, light spotting to endpapers, else very good.

Fitzgerald considered Tender is the Night, his fourth and final novel, to be his masterpiece, surpassing The Great Gatsby. Following an initially lukewarm reception, the novel’s reputation has steadily risen. Ernest Hemingway later observed that “Tender is the Night gets better and better.” The novel is now acclaimed as one of the great works of modern American literature.

The author’s first novel in nine years, following The Great Gatsby, Tender is the Night tells the story of the rise and fall of a glamorous couple, the psychiatrist Dick Diver and his wife Nicole, who is one of his patients. At the time Joyce’s wife Zelda was hospitalized for schizophrenia.

The advance issue of Tender is the Night is one of the great Fitzgerald rarities
Of Fitzgerald’s eight books (four of them novels), this is the only one for which advance copies were issued. “They are complete texts – not dummies – and were probably intended for use as review copies and salesman’s copies.  The Scribner’s records indicate that five hundred copies were ordered, but it is unlikely that that many copies were distributed because it is so rare: three institutional copies have been located [Virginia, Pierpont Morgan, and the Bruccoli Collection at the University of South Carolina] . … These are the most collectible copies of Tender is the Night in terms of priority and rarity” (Bruccoli and Baughman, F. Scott Fitzgerald in the Marketplace).

The book has been the subject of stage, screen, theater, television, and ballet adaptations.

Very rare: leading Fitzgerald bibliographer and collector Matthew Bruccoli located only three copies. Only two examples appear in the auction records of the past fifty years.

Provenance: Henry Barnard Strong, with bookplate. Strong was  member of the Yale class of 1922 and a member of Skull & Bones. Gerald Murphy, the model for Dick Diver in Tender is the Night, was likewise a Skull & Bones man.