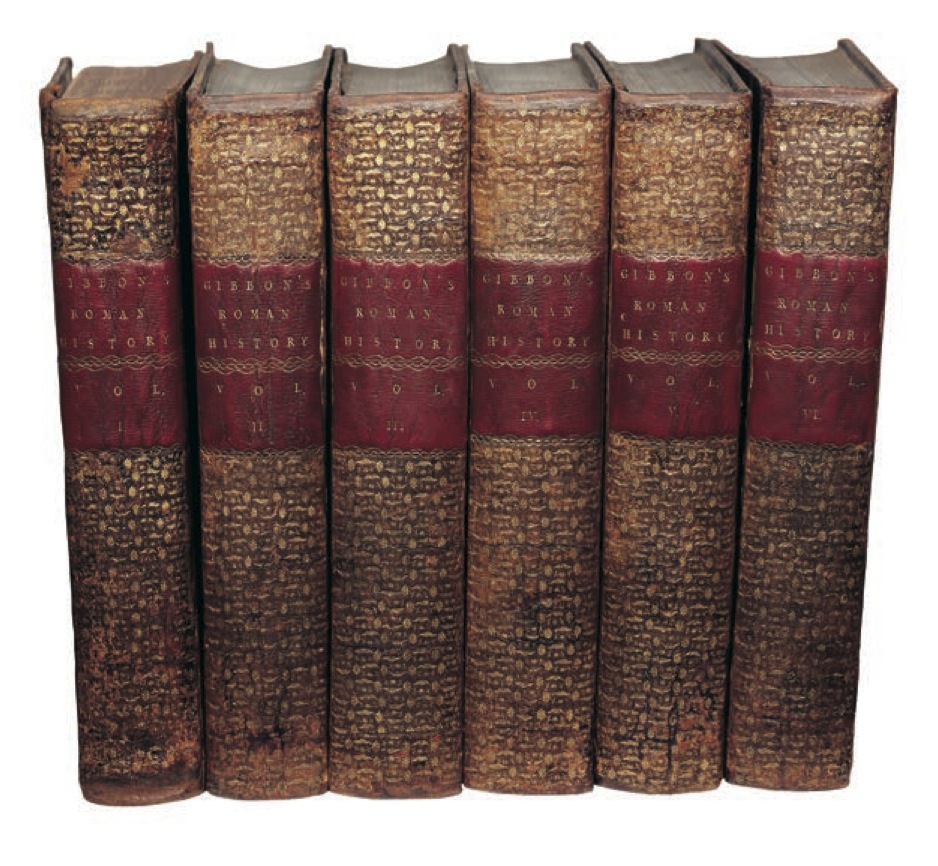 The Decline and Fall of the Roman Empire

GIBBON, EDWARD. The History of the Decline and Fall of the Roman Empire.

First editions of all six volumes of the most celebrated historical work in English literature. Gibbon’s Decline and Fall covers the thirteen centuries from the age of Trajan to the fall of Constantinople with unmatched erudition, clarity, and organization. “Gibbon brought a width of vision and a critical mastery of the available sources which have not been equaled to this day; and the result was clothed in an inimitable prose” (PMM).

Gibbon wrote that it was in Rome on October 15, 1764 while “musing amidst the ruins of the Capitol, where the barefooted friars were singing vespers in the temple of Jupiter … the idea of writing the decline and fall of the city first started into my mind.” It was not until 1772, after his father’s death and Gibbon’s taking up independent lodging in London, that he began the masterpiece which would be twenty years in the making. Upon reading the manuscript for the first volume, Gibbon’s publisher William Strahan doubled the printing order from 500 to 1000 copies.

In his Memoirs Gibbon described the period of waiting before publication of the first volume: “During this awful interval I was neither elated by the ambition of fame; nor depressed by the apprehension of contempt. My diligence and accuracy were attested by my own conscience.” In a letter written shortly before his death, David Hume wrote to Gibbon praising the Decline and Fall but warning that it might not be well-received in England because “Your Countrymen, for almost a whole Generation, have given themselves up to barbarism and absurd faction, and have totally neglected all polite Letters.” The book was a sensation, and the first printing sold out within a fortnight. Later volumes were published in greater numbers to satisfy the immense demand.

“The decline of Rome was the natural and inevitable effect of immoderate greatness. Prosperity ripened the principle of decay; the causes of destruction multiplied with the extent of conquest; and, as soon as time or accident had removed the artificial supports, the stupendous fabric yielded to the pressure of is own weight.” – Edward Gibbon, The Decline and Fall of the Roman Empire.

This is a handsome set of a work that is usually found rebacked or rebound.