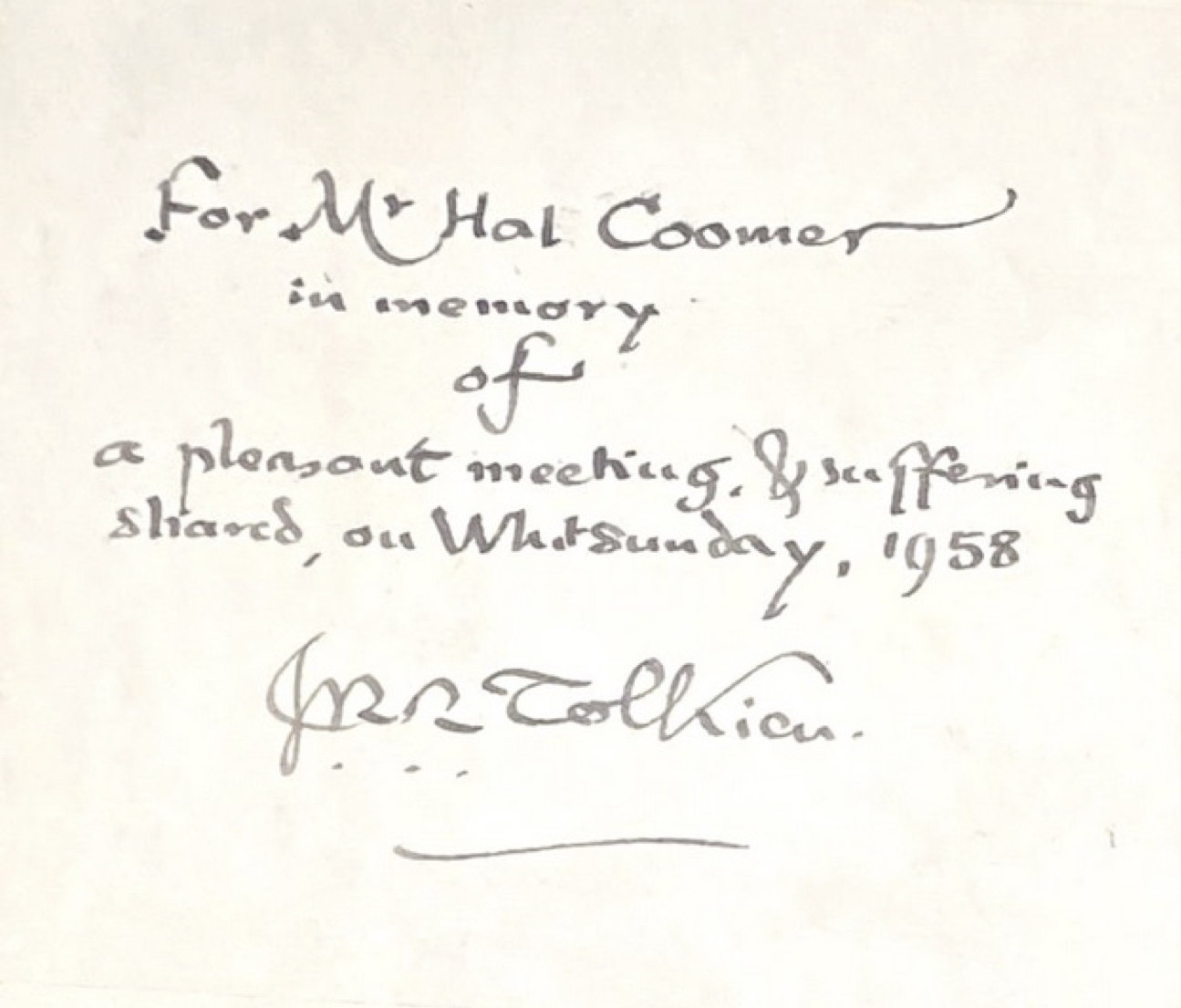 Three volumes. Folding map in each volume. Return of the King is second state with sig. 4 and slipped type on p. 49 (this was formerly Hammond’s first state, but the bibliographer has revised his opinion). Original red cloth and printed dust jackets. Show-through staining from old removed tape repairs to jackets of vols. 1-2, some wear, spines tanned. A good set.

FIRST EDITIONS. This is a very attractive set of the celebrated Lord of the Rings trilogy. The size of the edition was small: The Fellowship of the Ring (3000 copies), The Two Towers (3250 copies), and The Return of the King (7000 copies).

WITH AN INSCRIPTION BY TOLKIEN. Mounted at the front is a leaf inscribed by Tolkien: “For Mr Hal Coomer in memory of a pleasant meeting & suffering shared, on Whitsunday, 1958. J. R. R. Tolkien.”

The two had appeared together on a radio program. The set is accompanied by a letter dated 3 June 1958 from Tolkien’s publisher George Allen & Unwin. In this letter to Coomer, the publisher notes, “We do not normally disclose our author’s addresses, but we know how much Professor Tolkien enjoyed meeting you and are sure that he would like you to write to him direct, ” giving the address in Oxford. Tolkien evidently replied to Coomer’s letter with this inscription to put in his first edition of The Lord of the Rings.

Tolkien worked on this epic, not so much a trilogy as a long novel, from the publication of The Hobbit (1937) until the early 1950s. Beginning with the appearance of the second edition of 1966 and the nearly simultaneous appearance of the paperback edition in America, The Lord of the Rings became one of the best-selling works of fiction of the century.

This is the “paradigmatic work of modern heroic fantasy. . . . Its success was not immediate, but its publication in paperback was an event sufficiently momentous to transform completely the market situation of heroic fantasy, and hence bring about a new era in its history. The Lord of the Rings made fantasy a significant publishing category and inspired a deluge of new works. The astonishing reception and influence of this work qualify it as one of the most remarkable literary phenomena of the 20th century” (Barron, ed., Fantasy Literature).