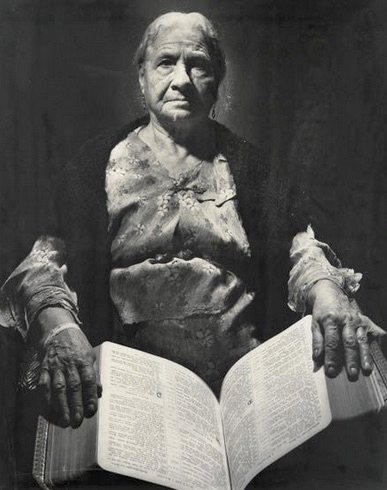 “The patience, suffering and endurance of the whole Jewish race seem to be summed up in that expression.”

Steichen made this celebrated photograph for a fundraising campaign for the Federation of Jewish Philanthropies during the first dark days of Nazi Germany. The photographer recalled in his memoir, “This job came at a time when we were getting the news of Hitler’s early humiliation of the Jews; they were made to wear arm bands, their stores were labeled, their windows were smashed. I wanted one picture as a sort of answer to this. I asked for a white-haired, strongly-built woman and a huge Bible. She was brought to the studio dressed just as I photographed her in ‘The Matriarch.’ She couldn’t understand my language, and I couldn’t understand hers, so my communication with her was all in sign language; but she seemed to grasp it. I hoped that the whole composition would have a certain majesty and, above all, the strength of something invincible” (Steichen, A Life in Photography, pp. 155-156).

The resulting portrait captured the imaginations of photography connoisseurs and the public alike. Eastman Kodak published the photograph in a LIFE Magazine campaign in 1939 stating in part, “Steichen’s great picture, The Matriarch, made by him as a contribution to the Federation of Jewish Charities, is a striking example of his rare imaginative gift—his power to create an idea, express an emotion, instead of merely representing a literal object, however skillfully and graphically. This is not just an old woman with a Bible on her lap—but the story of a whole lifetime, splendidly and triumphantly lived, expressed with dramatic vision and power. The photograph has won world-wide fame.”

“The Matriarch is a symbolic picture. The theme is as old as the Jewish faith. Steichen was particularly well qualified to handle such a subject with sympathy and power as he was forever conscious of his own Jewish background. His choice of model was superb. … Her gnarled yet expressive hands rest on the Holy Book, fountain-head of knowledge and wisdom, but in spite of the prominence given her hands and book her facial expression demands our attention. The patience, suffering and endurance of the whole Jewish race seem to be summed up in that expression. The Steichen mastery of lighting ensures that the several parts of the picture are united but certain aspects are left to our imagination” (Harker, Personal Choice: A Celebration of Twentieth Century Photographs, 54).

Among the countless exhibitions of The Matriarch are:

Victoria and Albert Museum, Personal Choice: a celebration of twentieth century photographs selected and introduced by photographers, painters, and writers, 23 March-22 May 1983.