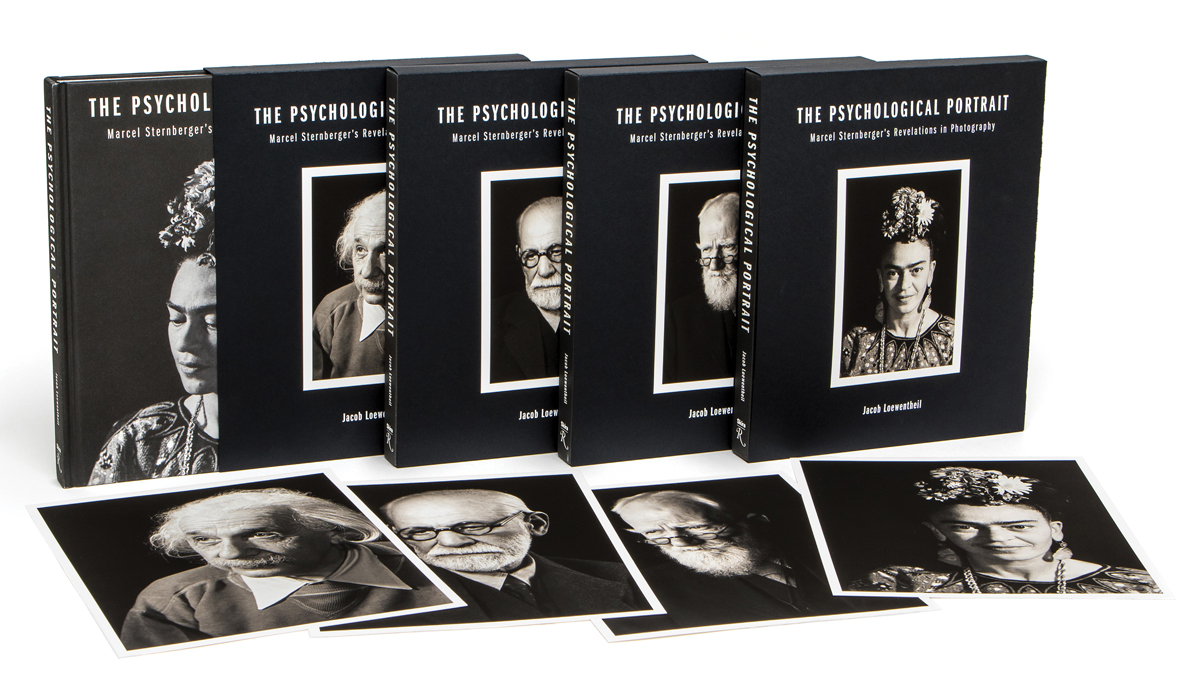 First edition, one of 100 copies of the Deluxe Estate Edition, signed and numbered by the author and accompanied by your choice of one of four 8 x 10 inch archival pigment photographs (Einstein, Freud, Shaw, or Kahlo).

This new book is the definitive work on Marcel Sternberger, a neglected giant of 20th-century portrait photography. Few photographers “matched Sternberger’s determination to create what we might in retrospect call pathognomic portraits. Between the lively expressions he captured and the minimalist lighting he used to reveal them, one might argue that there is hardly a more recognizable portraitist in the history of photography” (Philip Prodger, Head of Photographs, National Portrait Gallery, London).

“It was the golden age of photojournalism, but [Sternberger’s] photographs—including of some of the most celebrated political leaders, artists, and intellectuals of the time—were meant not only to document, but to tease out and capture his subjects’ personalities: FDR looking elegant and determined (his image on the dime was produced from one of Sternberger’s shots); a humorless Freud who, Loewentheil writes, ‘could easily have discerned the psychology taking place on both sides of the lens, [still] even he was not immune to its effects’; Frida Kahlo smiling beatifically, a flower crown fixed to her hair and mystery behind her eyes; Albert Einstein looking impish (of his portrait, he wrote, ‘It seems quite amazing to me that you could present this subject so appetizingly’).

Sternberger’s portraits revealed intimate, rarely- observed characteristics of these well-known figures, who were accustomed to managing their public personae; his image of father and daughter Jawaharlal Nehru and Indira Gandhi sitting together, for example, shows them emanating mutual love and respect” (New York Review of Books).

“This brilliant monograph by art scholar Jacob Loewentheil is a welcome appreciation and analysis of the work of the great portrait photographer Marcel Sternberger, who died in a 1956 car crash while on his way to visit his legendary friends (and his camera’s great subjects) Frida Kahlo and Diego Rivera. Indeed, many of Sternberger’s portraits have become part of our global sensibility– the famed, darkly backgrounded images of Sigmund Freud, Albert Einstein, Franklin Delano Roosevelt, George Bernard Shaw, Kahlo and Rivera, Jawaharlal Nehru, Indira Gandhi and countless other European, Asian and American luminaries, who literally shaped their times” (Matt Damsker, I Photo Central).

“This definitive monograph has 206 photographs, sketches, notes, and contact sheets along with a manual for portrait technique. More than just pictures, the book also tells the fascinating story of a Jewish refugee who defined modern portrait iconography way before his time” (American Photo).

This deluxe signed and numbered edition is accompanied by a choice of one of the following classic photographs by Marcel Sternberger, the Deluxe Estate Edition, with stamp of authenticity on the verso: