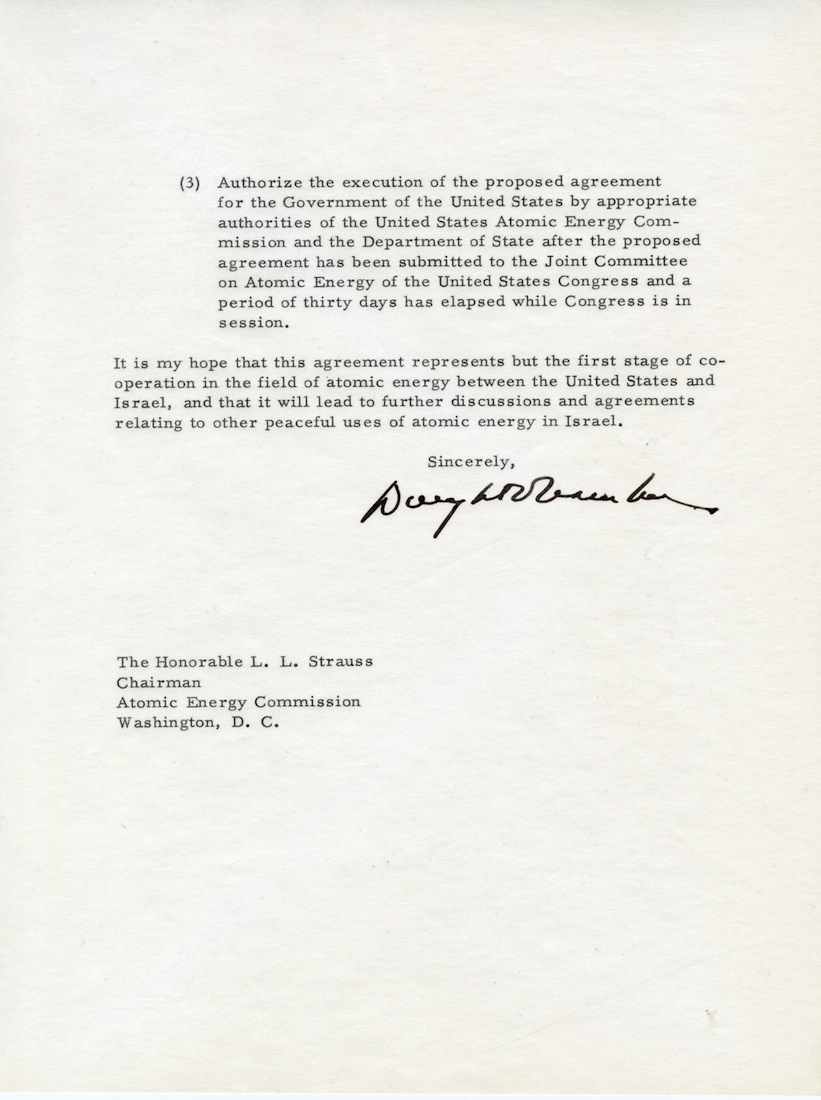 Eisenhower, Israel, and the Bomb: the foundation of Israel’s secret atomic weapons program

This is the document by which Eisenhower and the United States allowed Israel to become a nuclear power. Through Eisenhower’s Atoms for Peace initiative, the United States shared atomic energy material and technology with several countries. One of the first of these agreements was the one sharing the secrets of atomic energy with Israel, as authorized by Eisenhower in this letter. This document laid the foundation for Israel’s ultimate deterrence against destruction by its enemies. It was perhaps the greatest gift possible to the new Jewish state from its greatest ally, the American people.

Eisenhower saw the survival of the Jewish people and Israel in very personal terms. He had personally visited Buchenwald soon after its liberation, declaring, “I made the visit deliberately, in order to be in a position to give first-hand evidence of these things if ever, in the future, there develops a tendency to charge these allegations merely to ‘propaganda.’” He recalled that his sympathy for the Jewish people “was deeply affected by traditional Christian beliefs … [seeing] history as a battle between good and evil … [in which] everyone must choose sides” (Chernus, Eisenhower’s Atoms for Peace). Eisenhower declared, “The Jewish people couldn’t have a better friend than me,” and he acted on that friendship by giving Israel access to the most valuable technology in the world. The new state of Israel would become America’s strategic partner in an increasingly threatening world, and Israel would soon have the wherewithal to protect itself.

This document represents a defining moment in modern history and in the history of the Jewish people.

THE SETTING After Stalin’s death in 1953, President Eisenhower proposed to the United Nations that the United States and the Soviet Union share their monopoly of information on atomic power with the rest of the world –  but for purely peaceful purposes, and with safeguards against military use of such information. His Atoms for Peace proposal was embodied in the Atomic Energy Act of 1954, which authorized the President to transfer unclassified atomic information and nuclear material to foreign governments, and to assist such governments in establishing atomic research and energy reactors – Israel among them. The United States turned over to Israel a treasure trove of atomic information. A research reactor was soon constructed, and within a year, the American and Israeli Governments staged a joint exhibit in Tel Aviv on the peaceful uses of atomic energy.

By mid-1959, Israel’s first energy reactor was under construction, and Prime Minister David Ben-Gurion predicted that soon nuclear reactors would generate all of Israel’s electrical power. At this time, Israel was secretly building a plutonium-producing nuclear reactor at Dimona in the Negev Desert including the capability of reprocessing nuclear material for atomic weapons. By the time of the 1967 Six-Day War, Israel was able to produce at least one nuclear warhead.

EISENHOWER, THE JEWS, ISRAEL, AND THE BOMB

Soon after the Allies liberated the Buchenwald concentration camp in April 1945, Eisenhower recognized its unprecedented nature. Joined by Generals George S. Patton and Omar Bradley, Eisenhower came personally to witness its horrors. He cabled General George C. Marshall, chairman of the Joint Chiefs of Staff: “The things I saw beggar description. While I was touring the camp I encountered three men who had been inmates and by one ruse or another had made their escape. I interviewed them through an interpreter. The visual evidence and the verbal testimony of starvation, cruelty and bestiality were so overpowering as to leave me a bit sick. In one room, where they were piled up twenty or thirty naked men, killed by starvation, George Patton would not even enter. He said that he would get sick if he did so. I made the visit deliberately, in order to be in a position to give first-hand evidence of these things if ever, in the future, there develops a tendency to charge these allegations merely to ‘propaganda.’”

Eisenhower recognized that America had a special obligation to the Jewish people and to the Jewish state that soon came into being. For Eisenhower, Atoms for Peace clearly meant more than power plants and medical research when it came to Israel. When President Eisenhower’s cabinet would gather to discuss their concerns about whether Israel was building the bomb, the President was not interested in having the matter fully explored. Dino Brugioni of the CIA Photographic Intelligence Center stated, “I never did figure out whether the White House wanted Israel to have the bomb or not” (Hersh, The Samson Option: Israel’s Nuclear Arsenal and American Foreign Policy). In a 1958 briefing, two CIA aerial photography experts showed President Eisenhower and AEC Chairman Lewis Strauss the first spy-plane photographs of the Dimona site in the Negev Desert. The CIA authorities were left feeling “that Eisenhower wanted Israel to acquire nuclear weapons” (Cohen, Israel and the Bomb).

Decades later, while the world had accepted the fact that Israel possessed the bomb (though Israel continued to deny it), “unlike Pakistan and India, North Korea and Iran, Libya and Iraq, Israel has not been asked to give up its nuclear capability or to bare it to the world’s scrutiny; it has not been censured for producing the ultimate weapon, nor has it been threatened with sanctions … the United States has not hesitated openly to express its understanding of Israel’s status” (Karpin, The Bomb in the Basement).

Israel continues as a matter of public policy to sidestep the question of its status as a nuclear power. If direct comment were forthcoming, however, the Israeli government would surely echo the statement of the Indian official after India’s first nuclear bomb test: “I can say with confidence that the initial [Atoms for Peace] cooperation agreement itself has been the bedrock on which our nuclear program has been built.” It is this letter signed by President Dwight Eisenhower that ushered in the Atomic Age for Israel and gave it the wherewithal to provide for its own ultimate security.

This document represents a defining moment in modern history and in the history of the Jewish people.