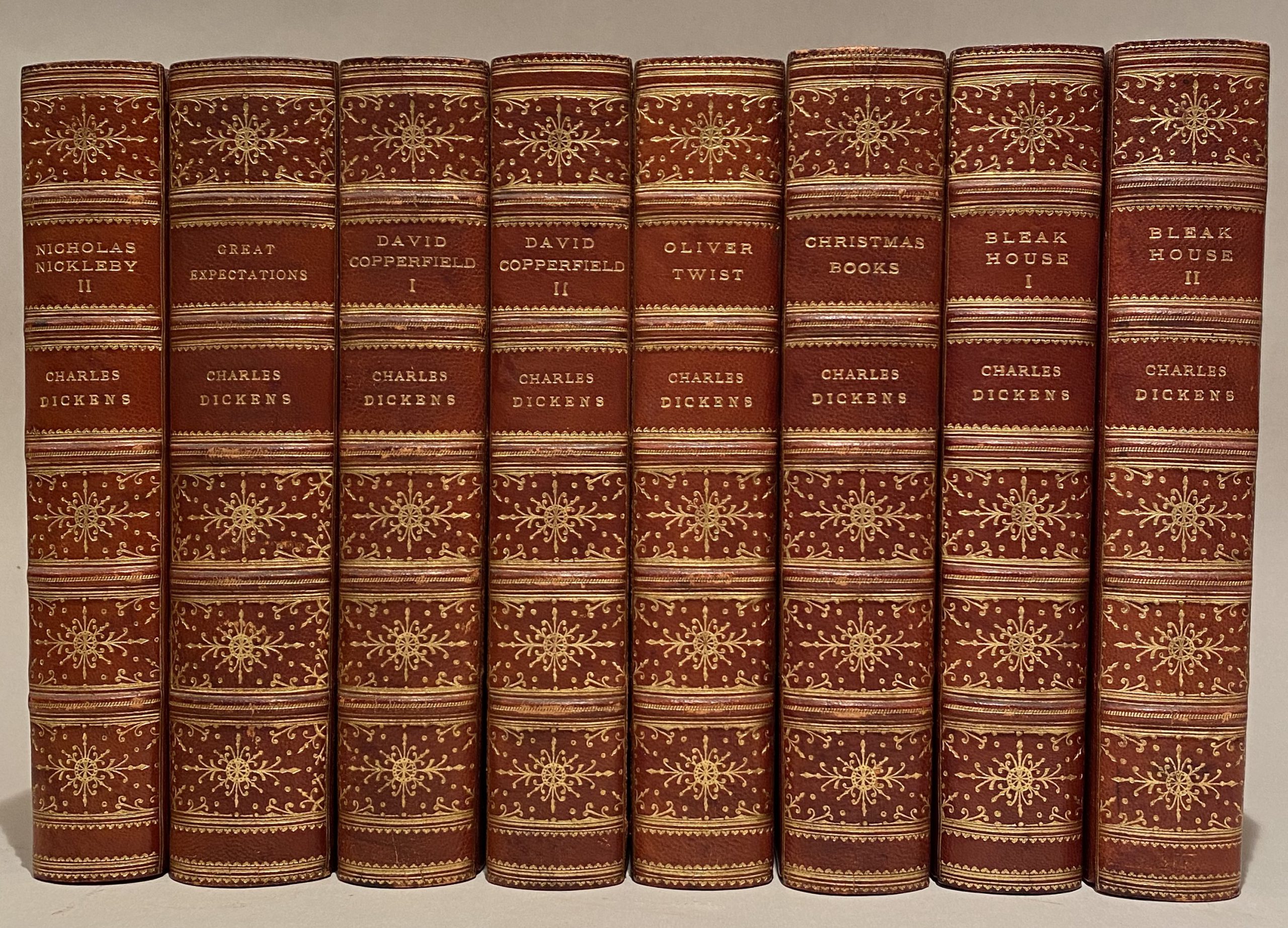 a wonderful set of the famous Illustrated Library Edition

A very handsome set of the famous “Illustrated Library Edition,” here in an early printing. The dedication at the front of the first volume (Pickwick Papers) states, “This the best edition of my books is, of right, inscribed to my dear friend John Forster, biographer of Oliver Goldsmith, in affectionate acknowledgment of his counsel, sympathy, and faithful friendship during my whole literary life.”

“The Library Edition came about largely because of the suggestion of Forster that while Dickens’s works were available in volumes in the Cheap Edition and in reprints of the serial parts, there was no high-quality edition that would appeal to the wealthy. Dickens eventually came round to the idea that an elegant edition could raise the stature of his writings. He faced a complication, in that the rights to the works were divided between Chapman and Hall and Bradbury and Evans. Consequently, the volumes contained the imprints of both publishers. With a dedication to Forster, the Library Edition appeared in 22 volumes in 1858-9 at 7s 6d per volume.

“Titles included Pickwick, Nickleby, Chuzzlewit, Old Curiosity Shop, Reprinted Pieces, Barnaby Rudge, Hard Times, Sketches by Boz, Oliver Twist, Dombey, Copperfield, Pictures from Italy, Bleak House, Little Dorrit, and Christmas Books. The only illustrations were the frontispieces. Between 1861 and 1874 this edition was reissued in 30 volumes with the addition of Tale of Two Cities, Great Expectations, Our Mutual Friend, The Uncommercial Traveller, A Child’s History of England, Christmas Stories, and Drood. The reissue contained illustrations the frontispieces plus additional illustrations by artists such as Marcus Stone, John Leech, and Clarkson Stanfield and came to be known as the Illustrated Library Edition. Recognizing the continuing potential for sales of Dickens’s works, Chapman and Hall in 1873 published a prospectus for the Second Illustrated Library Edition, containing, they contended, all the works the novelist wished to preserve. Calling it the first well-printed issue, with specially cast type and better paper than that used in previous editions, this set was published in 30 volumes between 1873 and 1876 and sold at £15 for the set, a high price for the time” (Oxford Reader’s Companion to Dickens, pp. 205-206).