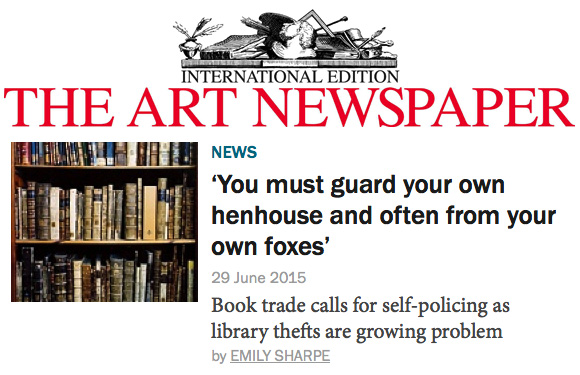 “You must guard your own henhouse and often from your own foxes” warned Stephan Loewentheil during his June 26 talk on stolen books at the British Library. The Art Newspaper’s coverage, Stephan’s talk and the conference, Heritage of Mankind in Peril: Theft, Retrieval, Sale and Restitution of Rare Books, Maps and Manuscripts, is presented here:

“That the French library made the theft known to the public immediately is remarkable in itself. Many institutions are “too embarrassed” to report missing objects, said Stephan Loewentheil, the owner of the 19th Century Rare Book and Photograph Shop in Brooklyn, New York, and Stevenson, Maryland. He told how a museum still has not owned up to the theft of a series of heritage photographs that he facilitated the return of a few years ago.”