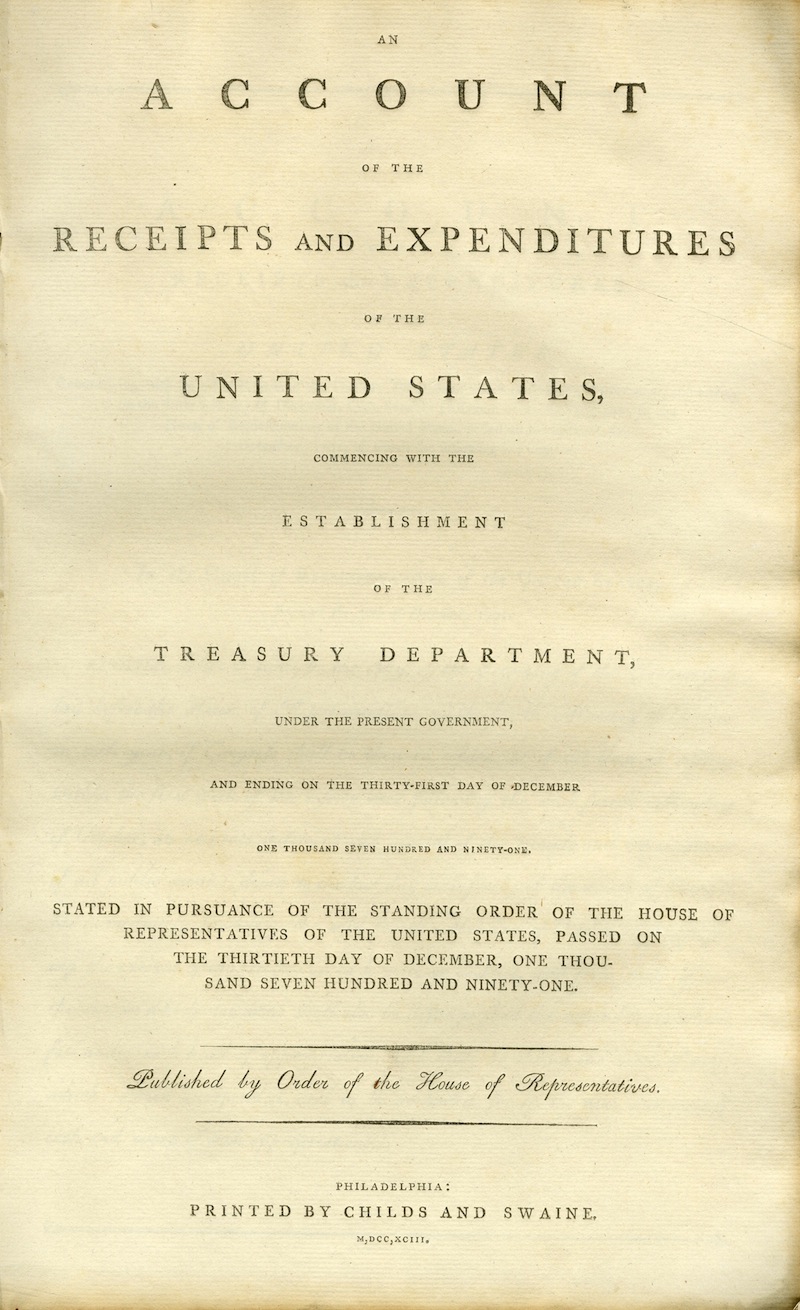 Finances of the United States from its Founding

(TREASURY.) Meredith, Samuel, Treasurer of the U.S. A Collection of Three Reports on the Treasury’s Receipts and Expenditures

1. An Account of the Receipts and Expenditures of the United States, commencing with the establishment of the Treasury Department [1789] . . . ending on the thirty-first Day of December One Thousand Seven Hundred and Ninety-one. Philadelphia: Childs and Swaine, 1793. Folio, 61 pp., folding table. Removed. Very good.

FIRST EDITION. Alexander Hamilton’s Treasury Department presents here the first printed report on the federal government’s receipts and expenditures during the nation’s first years, from March 1789 through December 1791. The report contains a wealth of detail on the reduction of the public debt, customs duties (including details on imports), salaries for Washington and the rest of the Executive, the costs of the military establishment and its western frontier, funds to Henry Knox for negotiating treaties with the Indians, surveys, the government of the Northwest Territory, revenue cutters and light-houses, expenses of removing the seat of Government from New York to Philadelphia, and countless other details involved in establishing the new government. This example includes the rare large folding table. Locations: AAS, Library Company, Brown, Harvard, Yale, and Princeton. Evans 26341.

FIRST EDITION. Samuel Meredith was first Treasurer of the United States. This is a detailed report of the expenditures and receipts of the federal government in 1790-1. Evans 23923.

3. The Treasurer of the United States’ Accounts of Payments and Receipts of Public Monies from 1st of January to the 30th of September 1792. [Philadelphia: Childs and Swaine, 1793]. Folio. Removed. Untrimmed. 67 pp. Very good.

FIRST EDITION. This is a detailed report of the expenditures and receipts of the federal government in 1792. Evans 24939.