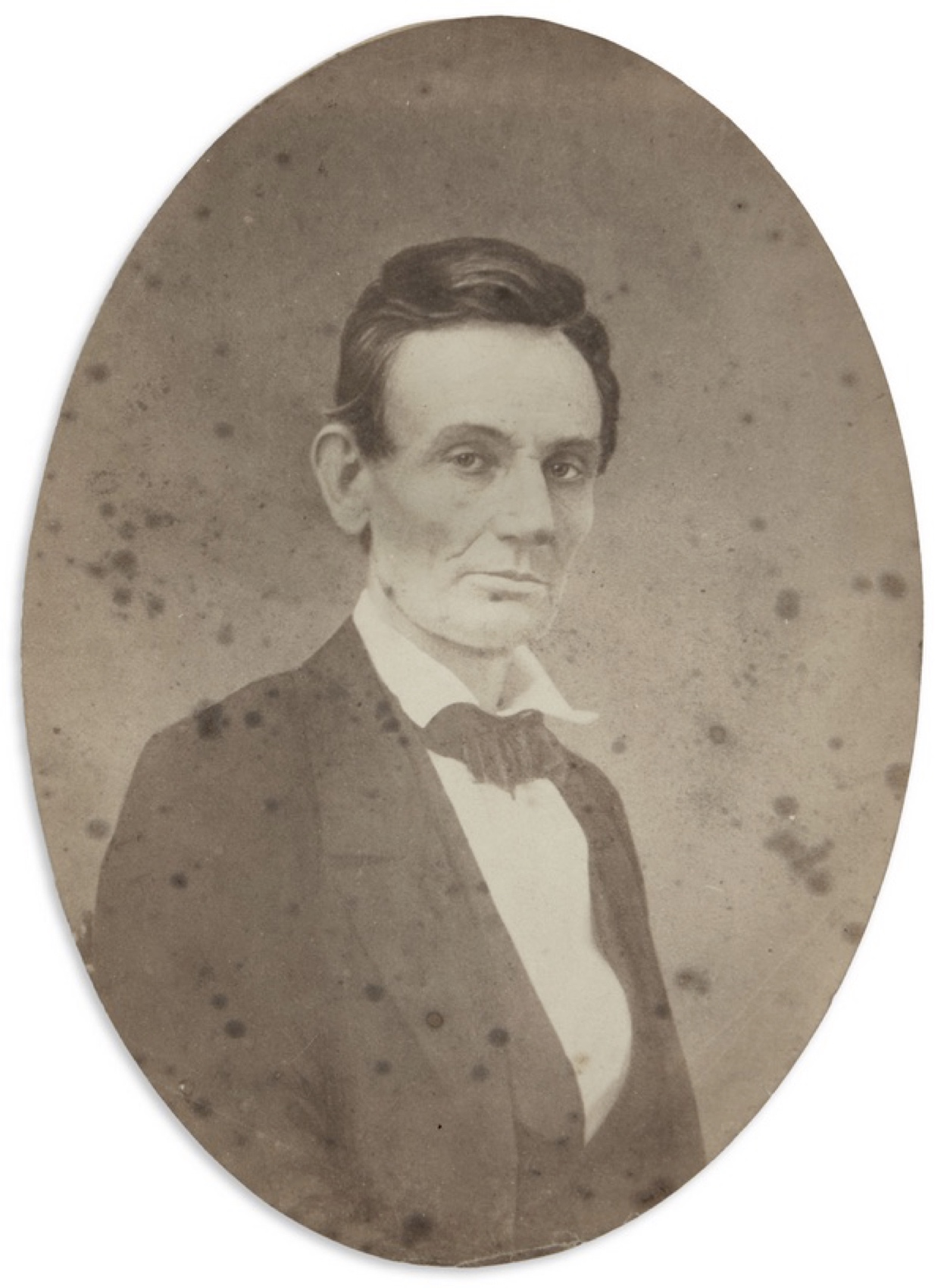 Salted paper print (7 ¼ x 5 ¼ oval), unmounted, retouched. Some spotting, but much better than the badly stained examples that have appeared in the market in recent years.

This salt print is the earliest paper photograph of Lincoln taken from life and not made from an ambrotype or daguerreotype. Lincoln sat for this portrait at the Cook (often given as Cooke) & Fassett Gallery in Chicago on October 4, 1859. Lincoln’s unsuccessful 1858 Senate race against Stephan Douglas had won him some national recognition. It was not until the Cooper Union address in New York in 1860 that Lincoln would be regarded as a serious candidate for the presidency.

Fassett recalled, “I made then one negative and as that was in the beginnings of photography … one good result was thought sufficient….Mr. Lincoln told me that he had sat for daguerrotypes, ambrotypes, &c., but never before for a [paper] photograph; therefore to me belongs the honor of having made the first photograph of that great and good man … I can’t tell you how many prints were made from my negative of Lincoln. I began printing copies as rapidly as possible as the demand was very great …” The negative was destroyed in the great Chicago fire of October 1871.

Shortly after Lincoln’s death, Cook wrote the photographer: “Little thought we in October 1859, when, at my solicitation, Abraham Lincoln visited with me your gallery, for the purpose of sitting for his photograph, what a value five years would give to the picture! Mrs. Lincoln pronounced this the best likeness she had ever seen of her husband. It shows him as he was, previous to his first nomination, and just as his old friends remember him. Consequently no recent picture can be so valuable to many; and the public ought to be truly grateful that you have preserved the negative with such care. There are so many caricatures of Mr. Lincoln in circulation that a reliable portrait is invaluable, and should adorn every house in the land” (Browne, The Every-Day Life of Abraham Lincoln, p. 135).

The Fassett portrait is the earliest obtainable photograph of Lincoln made from life. As Lincoln recognized and exploited the power of photography like no president before him, this is a landmark in American photographic and presidential history.