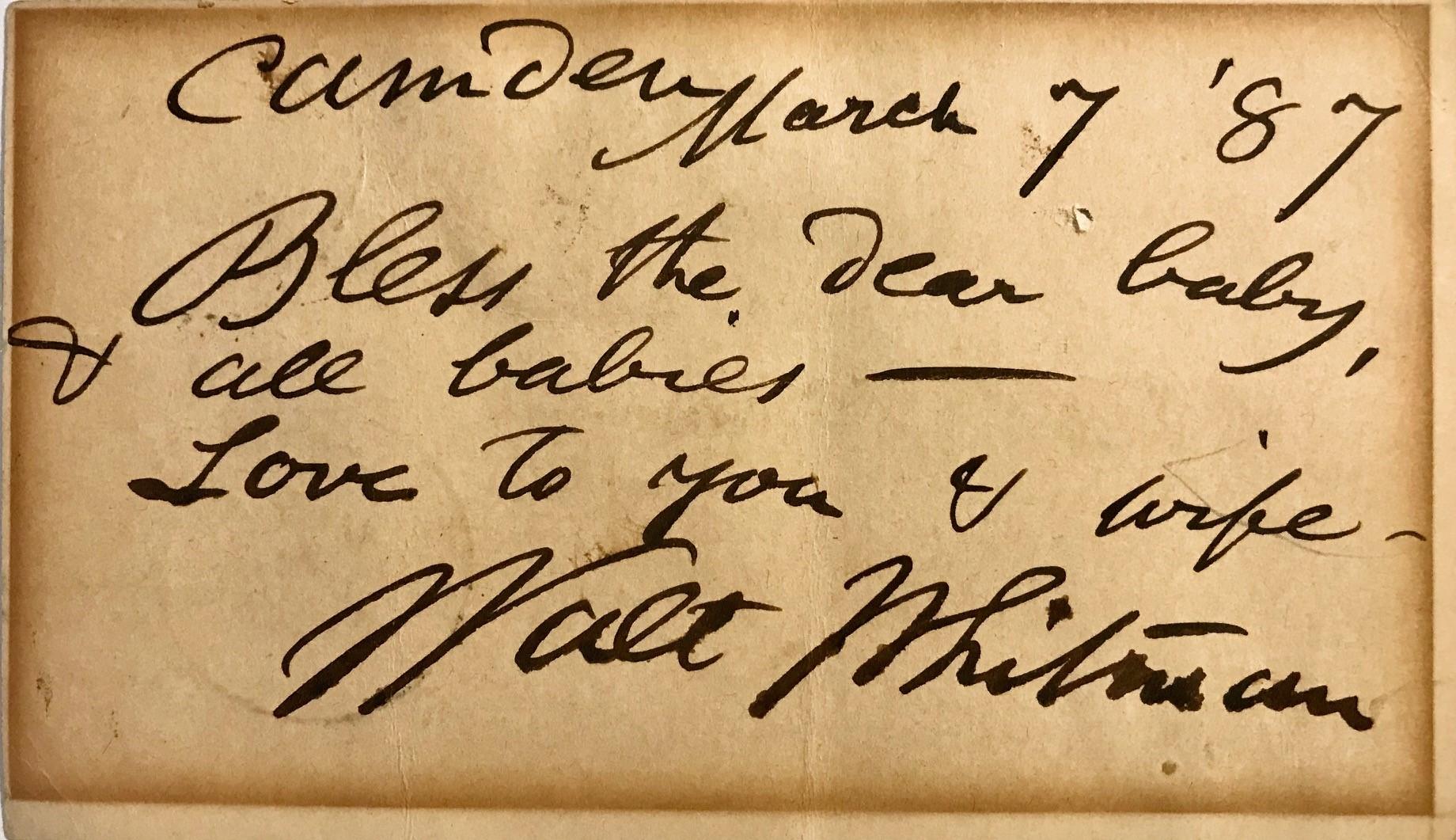 Postcard address by Whitman on verso. Wear and evidence of mounting on verso, light creases and stains. Darkening from old framing on recto. Very good.

Whitman writes to his good friend and benefactor John H. Johnston, the New York jeweler, evidently congratulating him on the birth of his child: “Bless the dear baby, & all babies – Love to you & wife, Walt Whitman.”

Whitman lived with Johnston and his family for several extended stays in the late 1870s. During the first visit, Johnston’s first wife died in childbirth. His relationship with Johnston was close and his children called the poet “Uncle Walt.” He called them “model children lively & free & children” who “form a great part of my comfort here.”

In 1888, Whitman wrote to his friend Horace Traubel, “Johnston is bright, quick, demonstrative, enthusiastic, unswerving: loyal to the last degree: a money-maker but a generous sample of the breed. I count him as in our inner circle, among the chosen few. Johnston has a transcendental side strongly marked and that’s where he spiritually connects with our crowd: he is free, progressive, alert. Johnston has had several wives—they liked me, I liked them: I deem that important. Often you hear it said: ‘He likes so and so but the wife is opposed.’ In this case the wives were on my side. Alma, the present Mrs. Johnston, is a wonderful woman: she is a convincing woman: when I look at her I think: now I know what womanhood means when it comes to its own. Johnston has a daughter, May: a most quiet, unassuming girl: she appeals to the fatherhood in me.” (Traubel, ed. With Walt Whitman in Camden).

Johnston was one of Whitman’s closest friends during his later years. Six months after writing this note blessing the baby, Whitman told Traubel, “I count [Johnston] as in our inner circle, among the chosen few.” Johnston helped the old poet in countless ways, from organizing a fund-raiser to purchasing an oil portrait of Whitman from the poet to investigating a suspected fraud involving signed photographs of Whitman. He was a pall-bearer at Whitman’s funeral.