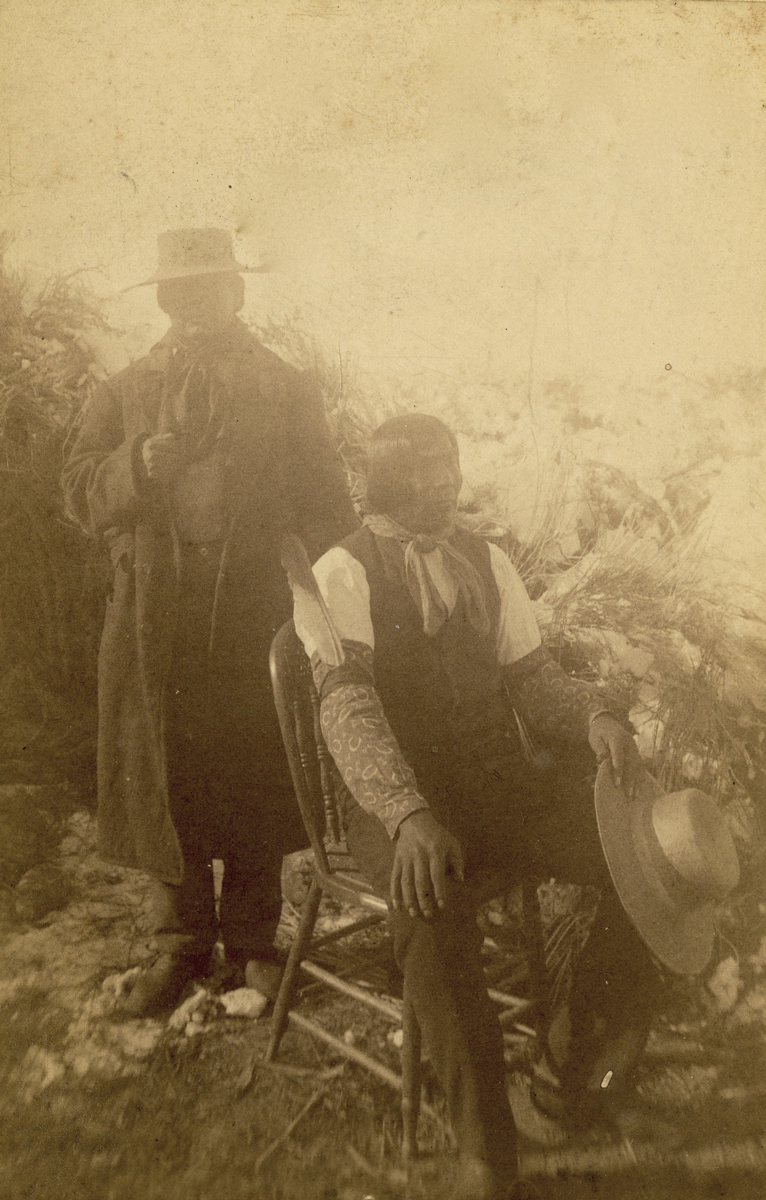 MOONEY, JAMES. Collection of Ten Photographs from Mooney’s Pioneering Investigations of the Ghost Dance and Other Native American Circle Dances

Ten albumen photographs (4 x 6 in. and 4 ¼ x 7 ½ in.) on original mounts, some with gold bevel. Most faded, light wear and soiling. Most of the photographs bear on the mount recto a pencil caption number likely in Mooney’s hand. Extremely rare.

This extremely rare and important collection documents the famous Ghost Dance and related circle dances soon after the Wounded Knee Massacre. These dramatic photographs, taken by the celebrated James Mooney, show these dances as they were taking place. Viewing the Ghost Dance among the Lakota as a threat, the U.S. Army had killed Sitting Bull while arresting him and soon thereafter killed Spotted Elk and perhaps 150 of his followers at Wounded Knee. Thus these Ghost Dance photographs represent original documentary evidence of a major phenomenon in the history of the American West.

The Ghost Dance was based in part on the circle dances used by many Native Americans since prehistoric times. The teachings of the prophet Jack Wilson, also known as Wovoka, made the Ghost Dance integral to a powerful religion and system of mystical beliefs which was to have grave consequences for the American Indian people. Wovoka’s prophetic vision during the solar eclipse of January 1, 1889 involved the resurrection of the Paiute dead and the removal of whites from America. He soon gained fame as a mystic and as a prophet of peace. He communicated with the ancestors and shared visions of past greatness and future happiness. The demoralized Native Americans of the West were receptive to Wovoka’s message of redemption. Wovoka promised that a new era would be ushered in through the hypnotic five-day Ghost Dance, which rapidly spread to Native Americans throughout the American West. Mooney’s photograph of Wovoka, founder of the Ghost Dance, is one highlight of this collection.

The Ghost Dance soon incorporated the belief that spiritual strength could provide physical protection. Bullet-proof “Ghost Shirts” would protect warriors from the weapons of the white man. The origins of this belief are uncertain, but anthropologist and photographer James Mooney argued that a likely source is the tradition of the Mormon “endowment garment,” which some Mormons believed would protect the pious wearer from danger.

In February 1890, the United States government broke the Lakota treaty by dividing the Sioux reservation of Dakota into smaller tribal areas and failing to deliver promised economic and educational reforms. The government promoted European-American culture and forbade most Native American traditional language and cultural practices including the Ghost Dance. The furious Lakota adopted militant elements of native ritual including the Ghost Shirt, alarming whites and the U.S. Army.

The growing animosity between the revitalized and militant Native Americans and white soldiers culminated in the massacre of perhaps 150 Lakota at Wounded Knee in December 1890. Thus, the secret rituals of the Ghost Dancers hold a critical place in the history of the fall of the Native American tribes. Because these rituals were rarely witnessed by non-participants, documentary evidence is rare.

These photographs were taken by James Mooney (1861-1921), an anthropologist with the Bureau of American Ethnology. He left Washington in late 1890 to investigate the potentially incendiary Ghost Dance movement. In the winter of 1891 Mooney lived among the Cheyenne, Arapaho, Comanche, Wichita, and other Native Americans in Native American territory as they performed the Ghost Dance ritual, hoping to usher in the American Indian millennium. Mooney reported, “I am so far in with the medicine men, that they have invited me to take part in the dance, although they order any white man away from the grounds” (Moses, The Indian Man: A Biography of James Mooney). Late in 1891, Mooney visited the Native Americans at Pine Ridge, South Dakota, near the site of the Wounded Knee massacre. Finding the Sioux understandably reluctant to discuss the religion, Mooney then crossed the Rockies to locate and interview the founder of the movement, Wovoka in Nevada. During this meeting, the first time that a white man had interviewed Wovoka about his movement, the mystic consented to be photographed.

“James Mooney was called ‘The Indian Man’ not because he dressed like one, nor because he thought American Indian societies were superior to his own, but rather from his knowledge, unsurpassed for its breadth and depth, of a few Indian societies. … His works are used constantly today in both history and anthropology. They have achieved a timelessness …” (Moses). One of the few whites to witness and take part in the Ghost Dance, Mooney became the greatest scholar of the ritual and the events which cascaded from this cultural collision.

Mooney’s Ghost Dance photographs are of the very greatest rarity in the market. We cannot trace any other examples appearing for sale.

WOVOKA, PROPHET OF THE GHOST DANCE

1. Wovoka, aka Jack Wilson, with another man. Seated, hat on his knee, a feather in an armband [1892]. 4 x 6 in. This is a rare photograph of Wovoka, founder of the Ghost Dance. This photograph by James Mooney represents a major moment in Native American spiritual practice in final stages of the European-American conquest.  This is a significant American photographic rarity. “Because Mooney had been honest with him, Wovoka allowed the ethnologist to take his picture, something that had never been done before. He would only charge the white man two dollars and fifty cents for the privilege. ‘I was prepared for this,’ Mooney explained, ‘and refused to pay him such charges, but agreed to give my regular price per day for his services as informant and to send him a copy of the picture when finished.’ The prophet agreed. Wovoka knotted a handkerchief about his neck, tied an eagle feather with another handkerchief just above his right elbow, and held his wide-brimmed hat over his left knee. He sat in three-quarter profile in front of the lens. Mooney tripped the shutter and the first photographic image of Wovoka was etched on the plate. After ward, as a token of friendship, Wovoka presented the ethnologist with a blanket of rabbit skins, some piñon nuts, a few magpie tail feathers, and a small, hardened brick of red clay paint. “With mutual expressions of good will we parted, his uncle going back to the reservation, while I took the train for Indian Territory” (L. G. Moses, Indian Man: A Biography of James Mooney, p. 68). As a young man Wovoka gained a reputation as a powerful medicine man. Among feats he often performed was being shot with a shotgun, presumably much like the modern bullet catch trick. This is one possible origin of the Lakota belief that their Ghost Shirts could stop bullets. Wovoka’s power was also seen in his alleged ability to control the weather. He was said to be able to end drought with precipitation, to light his pipe with the sun (presumably with an optical focus mechanism), and to form icicles in his hands.

2. Ghost Dance Ceremony [c. 1892-93]. A rare image of the Ghost Dance being performed by ten women in the middle of a circle of Arapaho, a settlement visible in the background. 4 ¼ x 7 ½ in.

4. Ghost Dance Ceremony [c. 1892-93]. A view of the backs of a circle of Arapaho dancers. This image was used in the composition of the painting made for Plate CXIV, “The Large Circle,” in Mooney’s BAE published report. 4 ¼ x 7 ½ in.

7. Crow Dance Ceremony [1893]. At the center of this group is a man, with headdress, on horseback. The Crow Dance was a ritual that accompanied the Ghost Dance. 4 ¼ x 7 ½ in.

9. Sun Dance Ceremony [1893]. 4 ¼ x 7 ½ in. A group of resting men. The Sun Dance was widespread among Plains Indians. It commonly involved the piercing of the skin of a young warrior.