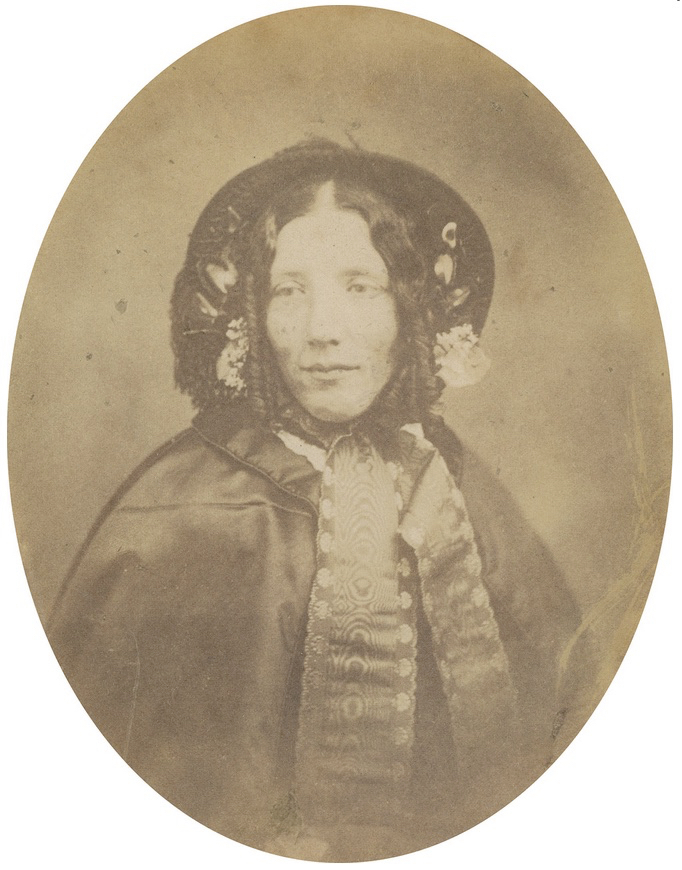 This is a fine salt print portrait of Harriet Beecher Stowe by John A. Whipple, a leading early American portrait photographer.

When she sat for this portrait in 1853, Stowe was at the height of her fame. Her Uncle Tom’s Cabin had become a runaway best seller in the United States and Great Britain when it was published in 1852. The book invigorated the abolition movement and moved many Northerners who were on the fence to active opposition to slavery. Stowe visited Lincoln at the White House in 1862, and the president is said to have exclaimed, “So this is the little lady who made this big war.”

John A. Whipple (1822-1891) was one of the pioneers of American photography. He came to Boston as a young man in 1840, he was one of the first in the United States to learn Daguerre’s process. That year he became the first American to produce the chemicals for Daguerre’s process. “He was instrumental in the development of the glass negative/paper positive process in America,” and several of his techniques and inventions played an important role in American photography.

In the 1840s and 1850s he was one of Boston’s foremost portrait photographers. “His portrait clientele included the highest of Boston society. … Whipple was known for the psychological content of his portraits, for his ability to put clients at ease by telling little stories, and for his skill in arranging sitters” (Encyclopedia of Nineteenth-Century Photography).

A smaller print of this rare portrait was published in the Photographic Art-Journal (August 1853), the first American periodical to be illustrated with original photographic prints. Our print measures 6 ½ x 5 inches, while the example of the print in the journal found in the Dibner Library, Smithsonian Institution, is just under 4 x 3 in.

This rare, large salt print is one of the most important Harriet Beecher Stowe photographs to appear in the market in many years.