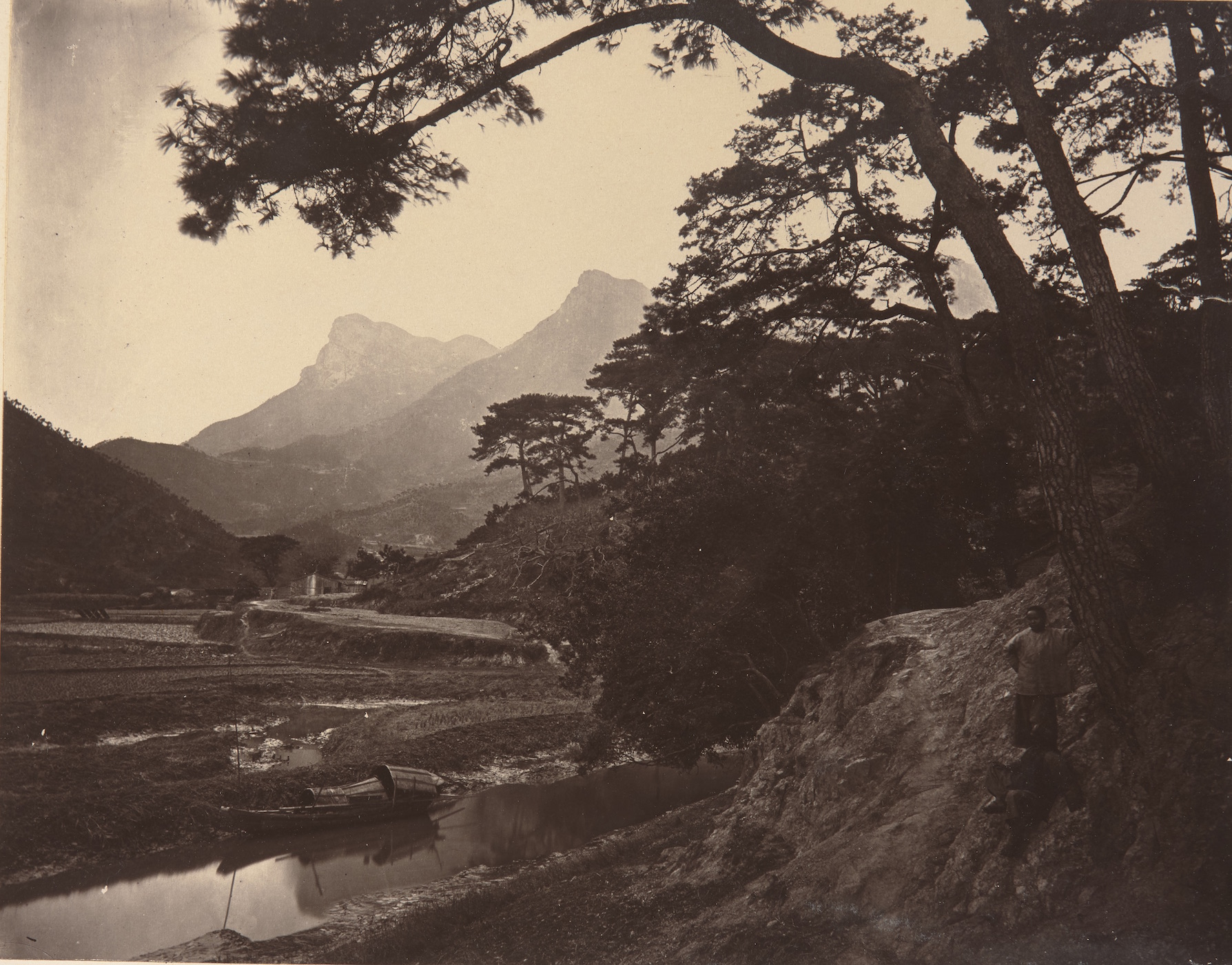 THOMSON, JOHN. Lover’s Leap from Foochow and the River Min

This is a magnificent photograph from John Thomson’s legendary Foochow and the River Min. Thomson is the greatest single figure in nineteenth-century photography in China.

The Scottish photographer spent four years photographing the people and places of China beginning in 1868. “By the time his travels brought him to the thriving city of Fuzhou, a little way up the River Min from the south China coast, John Thomson had developed and tuned his photographic aesthetic to respond to the magnificence of the landscape more acutely. … The attitude of reverence and contemplation which man should properly direct towards the great waterways of nature, whilst forming a central part of the Chinese landscape aesthetic, seems to have interlocked with Thomson’s own response” (Ovenden, John Thomson Photographer).

On his return to England in 1872, Thomson produced the magnificent Foochow and the River Min. An artistic triumph, the work was extremely expensive to produce, and perhaps seven sets survive. Individual prints from the series are extremely rare.

Lover’s Leap is the third photograph in Foochow and the River Min. Thomson recalled, “The bold mountains known to the natives as the ‘Wu-hu’ or ‘five tiger’ range, were wrapped in a thin veil of mist; but it was nearly mid-day before the last shred of vapour had withdrawn from the rugged overhanging crag, which has been called the ‘Lover’s Leap.’ The mountains rise to a considerable altitude about this part of the river, and terminate in bold rocky cliffs” (Thomson, Through China with a Camera).

“Thomson’s photographs are equally valued for their intrinsic qualities—the beauty of their imagery, their vivid sense of immediacy and their unconventional approach to composition. … The scenes on the River Min … foreshadow many of the discoveries of twentieth century photography” (White).

“Thomson was an exceptionally gifted photographer—equally adept at portraiture and landscape. He was the first to introduce the beauty of China’s inland scenery to the West—a wonderful example being his work in and around Foochow” (Encyclopedia of Nineteenth-Century Photography).

This is a magnificent photograph from John Thomson’s legendary Foochow and the River Min. Thomson is the greatest single figure in nineteenth-century photography of China.

This is a rare opportunity to acquire a major photograph from John Thomson’s masterpiece, Foochow and the River Min.