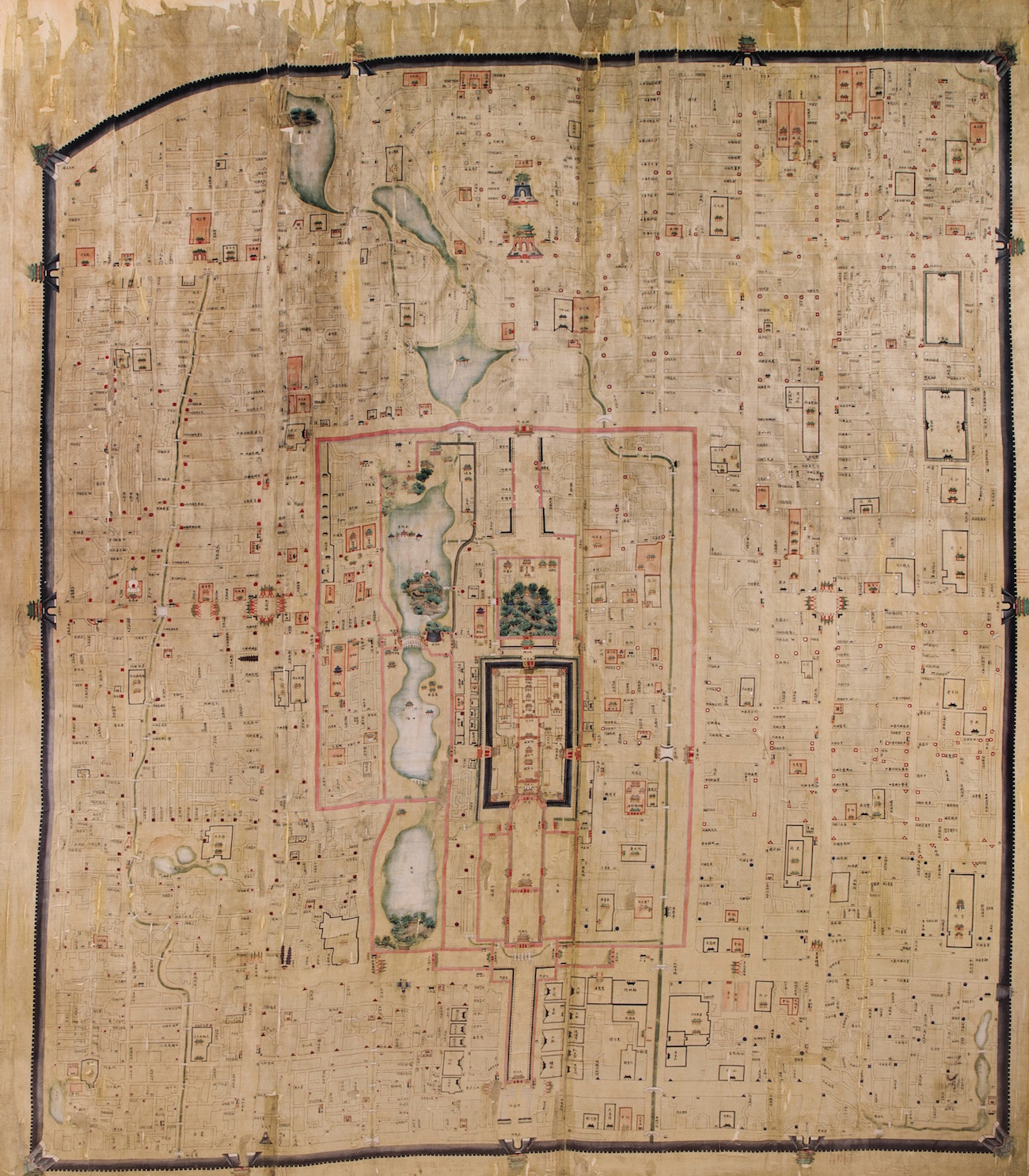 174 x 145 cm (68 ½ x 57 in.). Watercolor and ink on silk. Extensively annotated with the names of buildings and streets. Mounted and framed. Old repairs, loss and wear, frayed at edges. Very good condition. An enormous, impressive map of Beijing.

Only three other examples of this remarkable form of map painted on silk are known, and this is the only example in private hands. Professor K. Tanaka (Sugiura) of Kyoto University, the leading authority on these maps, has located only four examples on silk: National Library of China, Royal Geographical Society, Royal Ontario Museum, and the present example (three copies on paper are known). The National Library of China map on silk, the only one to include the Outer City, was a highlight of the 2016 exhibition at the National Library of Australia, Celestial Empire: Life in China, 1644-1911. That map appeared as a frontispiece in the associated book of the same name.

The map appears to have been drawn primarily to identify and locate the hundreds of Eight Banner garrisons. The Eight Banners system, comprising an elite hereditary class of families with special privileges, responsibilities, and military obligations, was central to the defense and organization of the Qing Empire. The painstaking identification of these garrisons on the present map, the National Library of China map (with many garrison differences from our map), and the later paper map in Kyoto, suggests that these rare maps had a military or governmental purpose.

“In Beijing the ranks of the eight banners were arranged around the imperial city, and the Chinese were moved to the southern part of the capital. This arrangement can be seen in a map of Beijing [the National Library of China example] (page vi) produced in the reign of the Daoguang emperor (r. 1820-1850). The palace lies at the heart of the imperial city, which is encompassed by the Manchu city. Throughout the latter, the locations of banner troops are indicated by circles (Manchu) triangles (Mongolian) and squares (Chinese), each in the colour of the relevant banner” (Woolley, Celestial Empire: Life in China, 1644-1911, p. 1). Professor K. Tanaka notes that only Manchu eight banners were arranged in the Imperial City, while eight banners of the three armies (Manchu, Mongolian, and Chinese) were arranged in the Inner City.

Beijing, built along a north-south axis, was divided by walls into four city sections: the Forbidden City, the Imperial City, the Inner City, and the Outer City. This map shows the first three, with the Forbidden City at the center, surrounded by a massive wall with four gates and four corner towers. The Imperial City, incorporating three lakes to the west, is surrounded by a fortified wall with six gates. Beyond it is the Inner City, also called Jingcheng (“capital city”) or Dacheng (“big city”). The entirety is surrounded by another massive wall, which was 15 miles long, 50 ft. high and 65 ft. thick at its base.

This extremely rare survival, the only example known in private hands, is a magnificent display piece.