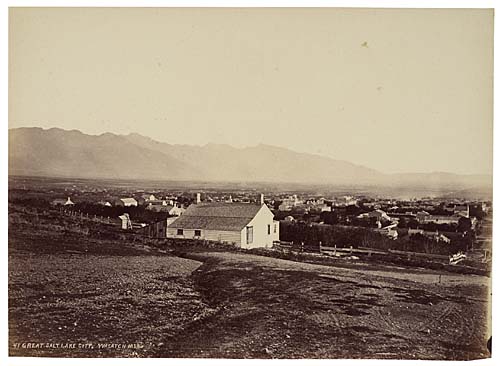 This is a splendid print of this classic Jackson view of Salt Lake City.

William Henry Jackson is the greatest figure on the photography of the American West in the nineteenth century. This image is from his series of photographs made in the summer of 1869 upon the completion of the Union Pacific transcontinental railroad. Jackson’s catalogue of photographs describes this great image: “Great Salt Lake City, Utah. A view looking south from the bluffs just north of the city, giving a bird’s-eye view and also a view of the Wasatch Mountains in the distance. In the center of the first view are grouped the many fine buildings of President Young. The one with the many gable windows is the ‘Lion House,’ the abode of his numerous wives, while the one just to the left of it is the ‘Bee-Hive’ House, his own private residence. The houses are so called from the emblems placed on them. Plainly visible are also many others of the finest private and public buildings” (Descriptive Catalogue of the Photographs of the United States Geological Survey of the Territories).