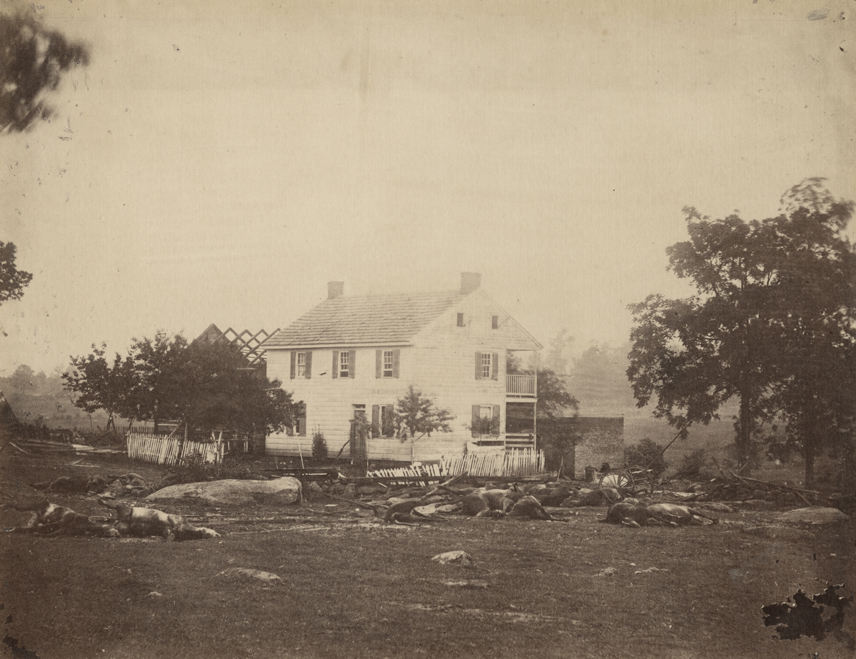 The most celebrated collection of Civil War photographs, Gardner’s Photographic Sketch Book of the War contains “many of the most graphic and memorable Civil War images that have come down to us” (ICP). The photographs covered the entire conflict from Manassas in 1862 to the dedication of the monument at Bull Run in June 1865. Gardner presents the photographs, each accompanied by his descriptive text, as “mementoes of the fearful struggle,” recording war as it had never been recorded before.

Alexander Gardner joined Mathew Brady’s studio in the 1850s and introduced the new wet-plate collodion process there. This process was employed in the photographs of the Sketch Book. When Brady’s sight deteriorated in the 1850s, Gardner became the studio’s chief photographer. Working with the Army of the Potomac as a civilian photographer, Gardner happened to be present during the Battle of Antietam. Carrying his heavy equipment over the battlefield in the immediate aftermath of this bloodiest of battles, he captured a series of beautiful and shocking images. Within a month of publication they were exhibited at Brady’s New York gallery, where crowds waited in line for hours to view them.

When Brady accepted credit for the images, as he was wont to do, the outraged Gardner resigned and set up his own studio, bringing the leading Brady photographers with him. These men, including George Barnard, David Knox, Timothy O’Sullivan, and William Pywell, contributed to the immense Photographic Sketch Book project, and they are scrupulously credited in its captions.

The collection comprises the following photographs from Gardner’s Photographic Sketch Book of the War:

1. O’Sullivan. Slaughter Pen, Foot of Round Top, Gettysburg (plate 44). This famous site on the Gettysburg battlefield is in front of Little Round Top.

2. Barnard & Gibson. Fortifications on Heights of Centreville, Va. (plate 5). This fine view shows Confederate defenses near Bull Run. After the first battle of Bull Run the Confederates extended their earthworks from Manassas across Bull Run and along the ridge of Centreville.

3. O’Sullivan. Signal Tower on Elk Mountain, Maryland, Overlooking Battlefield of Antietam (plate 22). The Army Signal Corps played a key role at Antietam, relating enemy movements to the commanders and transmitting orders in turn.  Gardner notes that the Elk Mountain tower was the most important of the look-outs at Antietam.

4. Gardner. Scene in Pleasant Valley, Maryland (plate 24). Gen. George McClellan selected this house as a temporary home for his wife, and the Union commander spent many hours here as well. Gardner notes that members of Burnside’s and McClellan’s staffs are in the photograph and that McClellan was drawn away because of enemy action nearby.

5. O’Sullivan. Trossel’s House, Battle-field of Gettysburg (plate 42). This house was in front of the left of the Union position at Gettysburg. “Thousands of dead and wounded were strewn over the fields adjacent to this house, and graves of Confederates can be found in every direction” (Gardner).

6. O’Sullivan. Castle Murray, near Auburn, Virginia (plate 47). “In the Fall of 1863, Army Headquarters were pitched, for some days, near [Dr. Murray’s house]; at the same time, Gen. Pleasanton, commanding the cavalry, had his camp on Rockhill, his tents forming, with Castle Murray, a very effective picture” (Gardner).

7. O’Sullivan. Commissary Department, Head-Quarters Army of the Potomac (plate 61). “The commissary at General Headquarters of the Army of the Potomac was nothing less than an immense grocery establishment. Coffee, tea, sugar, molasses, bacon, salt pork, fresh beef, potatoes, rice, flour &c. were always kept on hand in large quantities” (Gardner).