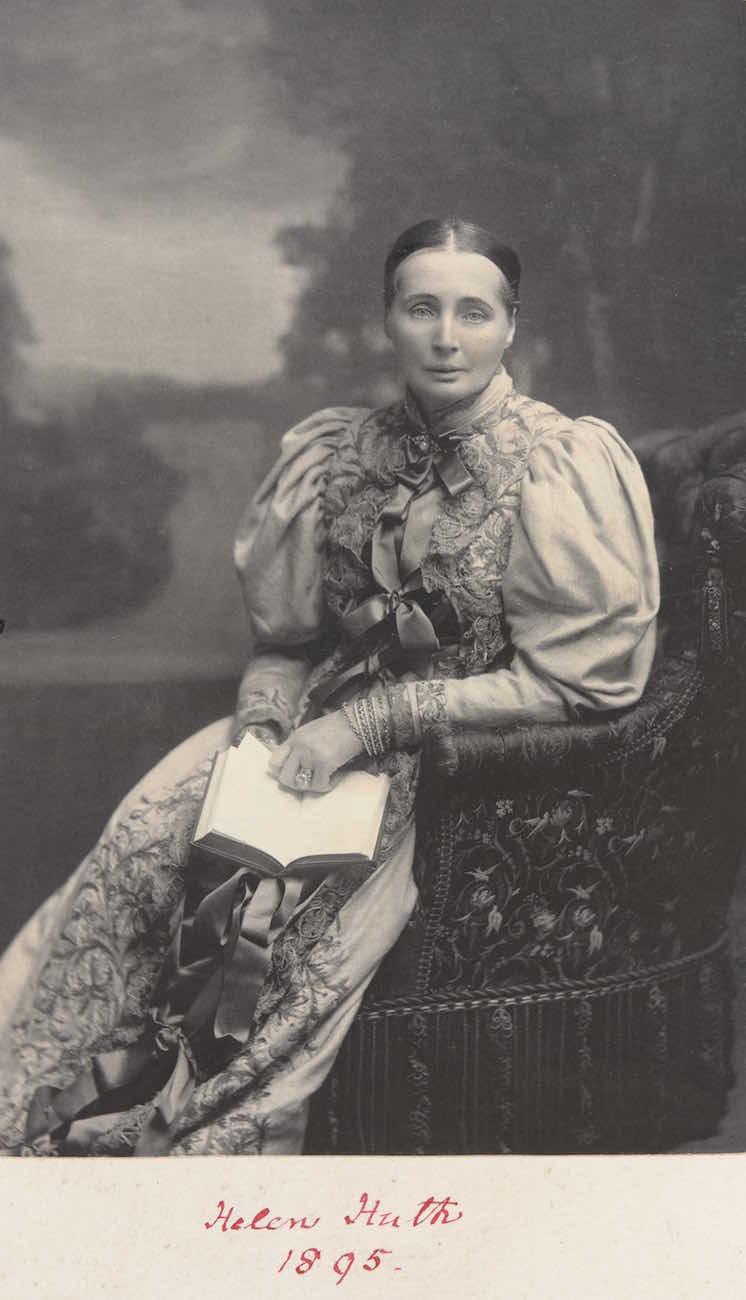 This magnificent, imposing album was made by a prominent late-Victorian hostess, patron of the arts, and gifted artist.

Helen Rose Huth was the wife of the banker Louis Huth. The Huths were major art collectors who displayed their art in the gallery built for the purpose at their home, Possingworth. Helen sat for both George Frederic Watts and James Abbott McNeill Whistler who painted the celebrated Arrangement in Black, No. 2: Portrait of Mrs Louis Huth. Whister required many sittings, and when she complained that Watts never treated her that way, Whistler replied, “And still, you know, you come to me!” After Louis Huth’s death in 1905, she married Archibald Howe.

The album, the product of vast labor, contains 50 watercolors (all but four by Mrs. Huth) comprising studies of flowers, landscapes, and other scenes in Possingworth, East Sussex, and Scalpay (and other Hebridean locations); 70 photographs of buildings, landscapes, people, and paintings; and six pen-and-ink or pencil sketches. Many of the watercolors bear signatures, dates, and places. The album is filled with elegant calligraphic transcriptions of poems and prose pieces by Victorian writers (the Brownings being particular favorites), often with pen-and-ink floral borders. A number of the unsigned poems appear to be by Helen Rose Huth herself.

The earliest watercolor in the album is dated 1879, and work continued until at least 1905. In that year Louis Huth died. A photograph of his tombstone is displayed opposite a portrait of the banker. A fine seated studio portrait of Helen Rose Huth, dated 1895, appears early in the volume. The photographs are often connected to the subjects of the poems they accompany.

Provenance: Helen Rose Huth (1837-1924). The Huths’ fine country house Possingworth Park (completed in 1866) “was a highly ornate, neo-Gothic mansion … The house contained 42 bedrooms, large oak panelled reception rooms and a conservatory named the Winter Garden. There was also a large picture gallery. Louis Huth was a passionate art collector and his house was designed to display artwork at its best. A large picture gallery on the ground floor was designed specifically to exhibit his most treasured artworks. … Possingworth was also the venue of a secret meeting between Major Generals Montgomery and Eisenhower in 1942. There they laid plans for the cross-channel invasion that was to take place two years later” (Holy Cross Priory website). The house is now Holy Cross Priory.