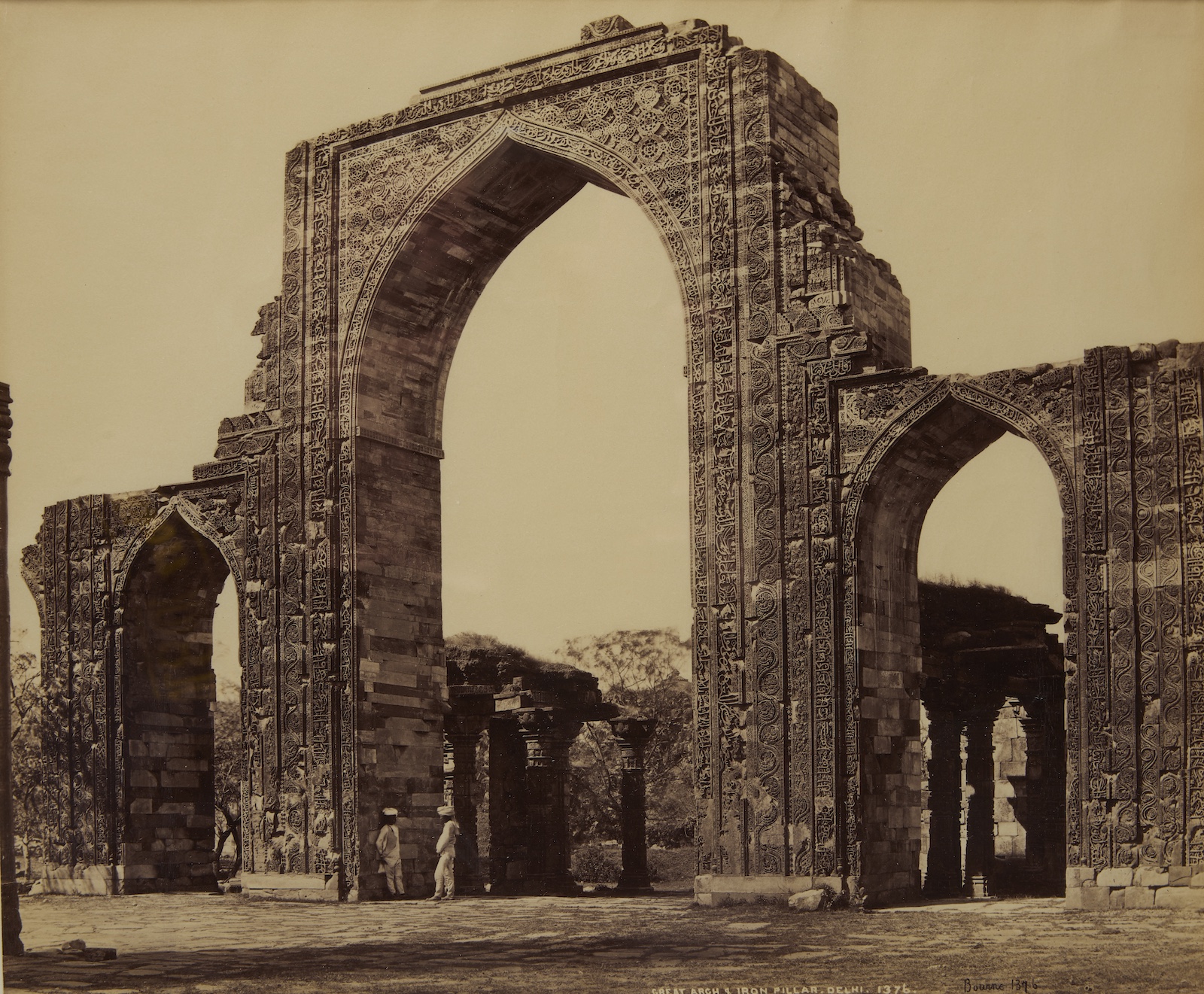 one of the most famous monuments in India

This is a splendid pair of Samuel Bourne views of the Qutb complex in Delhi.

The first photograph shows the Delhi minaret and “victory tower” at the Qutb complex, the tallest minaret in the world built of bricks. “The Qutb Minar is one of the most famous monuments in India and one of the most significant examples of early Indo-Islamic architecture. It is a tower of victory which also served as a minaret for the adjacent Quwwat al-Islam (Might of Islam) mosque. It was begun by Qutb-ud-Din Aybak (ruled 1206-1210), the first Sultan of Delhi and founder of the Mamluk or Slave Dynasty, and continued by Shams-ud-Din Iltutmish (ruled 1211-1236). It is 72.5 m (238 ft) high, and rises in five tapering fluted” (British Library).

The second photograph shows the screen of the Quwwat-ul-Islam mosque. “The screen, which is often referred to as the ‘Great Arch’, is 6.7 metres wide and 16 metres high. An inscription on the central arch states that it was built in 1199 by Qutbuddin Aibak. It was one of the first Islamic monuments to be built by Hindu craftsmen in India. The craftsmen used the traditional method of laying blocks of stone horizontally and rounding the sides of individual stones to create the curve of the arch. The screen was ornately decorated with carved calligraphy and repeating scroll-like designs” (Victoria and Albert Museum). The iron pillar at the left is cropped as issued. The dark tones and strong contrast wonderfully highlight the intricate carvings.

British photographer Samuel Bourne traveled throughout India from 1863-1870, photographing monuments, people, and landscapes. “By the time Bourne left India in 1870 to return to England, he had produced over 2,500 views, mostly of architecture and landscapes, which, distributed by his partner Charles Shepherd, constitute the most exhaustive record made in India by a single photographer. Bourne’s carefully thought-out, meticulously crafted images were collected by tourists, archaeologists, and botanists alike” (Metropolitan Museum of Art).