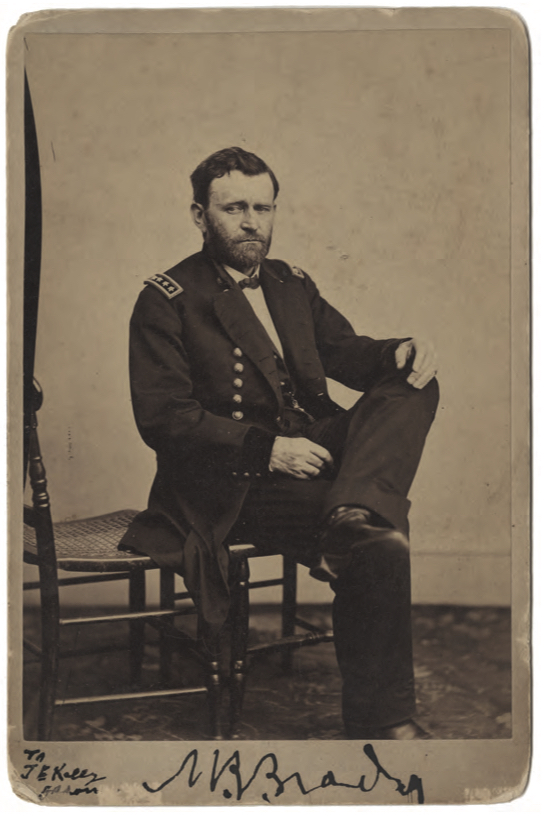 Albumen print (4 x 5 ¾ in.), cabinet card mount with the stamp of the Brady Studio, Washington D.C. Some wear at edges of mount, but an excellent photograph with strong contrast.

This Mathew Brady portrait of General Ulysses S. Grant is inscribed and signed by Brady to J.E. Kelly on the mount. Brady was nearly blind during much of his photographic career as well as semi-literate throughout his life and so he rarely signed or inscribed photographs.

The recipient, J.E. Kelly, was an American sculptor and illustrator who specialized in depictions of the peoples and events of the Civil War. The verso of the photograph bears an inscription by Kelly recounting the session:

“Gen. Parker [Grant’s adjutant, Ely Parker] told me that this and NO 2 are the best ones of Grant – Brady told me that Grant had been posing for him when Grant went over and took this pose saying Brady how’d this do  Kelly”

Brady was the preeminent photographer of his generation, and he was particularly remembered for documentation of the American Civil War. Long before his fame from the war he made his mark in photographic history in portrait photography with his galleries of notable Americans in New York City and Washington, D.C. The galleries were widely acclaimed tourist attractions as well as social meeting places for all classes of citizens.

The photograph features Grant wearing his military uniform, before his election to the White House. At the time of this photograph he was a four-star general, the highest rank normally attainable in the United States.

So-called ‘signed’ prints are occasionally offered in the trade or at auction; in almost all cases the photographs are in fact signed by assistants from Brady’s studio. Brady’s scrawl is unique and readily recognizable, as in this rare authentic example.

A very rare and important survival linking two of the greatest Americans of the Civil War era.